I was pretty surprised to find a non-stop flight from Portland to Tokyo, but Delta Airlines serves this route with once daily flights on a Boeing 767.  The flight from Portland International (PDX) to Narita International Airport (NRT) is staffed with Japanese speaking cabin crew.  The flight is also stocked with Japanese beer.  Must have Sapporo draft! 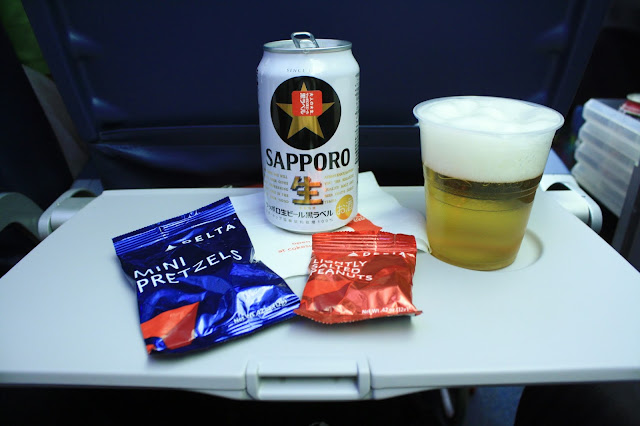 What I always look forward to on international flights are the meals.  Whether it actually tastes good or not is another question, but this is a chance to see what an airline presents to its passengers on board.  On our flight we were given a choice of teriyaki chicken or beef stroganoff for our first service.  I chose the teriyaki chicken with snap peas and steamed rice.  After I uncovered the foil to reveal what was inside... what I found was not exactly a pretty sight.  The chicken was breaded, fried, and sitting atop a layer of teriyaki sauce, and there were three snap peas.  Eek. 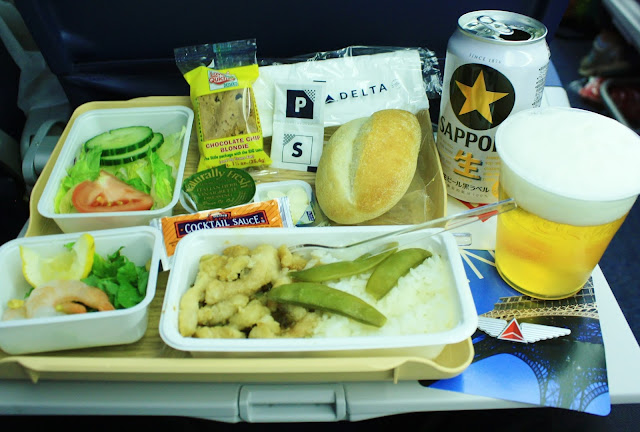 The mid-flight snack were old-fashioned ice cream sandwiches.  If I hadn't had them during those kindergarten afternoons as a child, I would wonder what in the world they were.  I'm sure some of the Chinese passengers transferring on to Beijing or other destinations in Asia were thinking exactly that.

The pre-arrival meal was a sesame bagel with omelette and cheese sandwiched in the middle.  Let's just say that it did not remind me of a freshly toasted New York bagel. 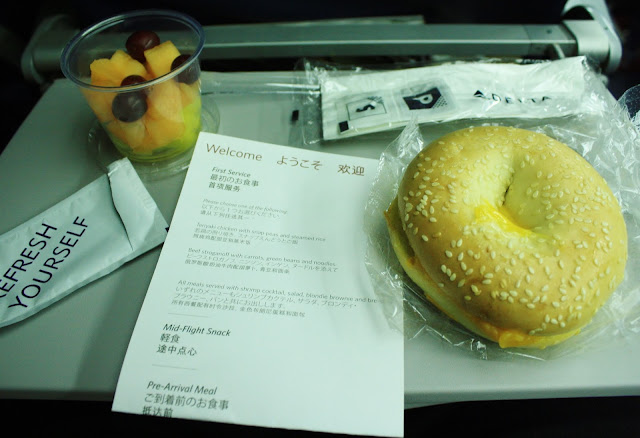 Okay, so the food wasn't great.  In fact, it was pretty terrible... like the Western style breakfast omelette on the China Airlines LAX to Taipei route kind of terrible.  But the flight attendants were extremely friendly... beyond expectation.  One flight attendant Mimi practiced Mandarin with me during the long flight because she said that the opportunity to hold an entire conversation in her native tongue was rare.  Another flight attendant Lily gifted me with one of her Delta wing pins, which I am adding to my collection.  It is service like this on long haul international flights that makes the reputation of an airline.  Super props to Mimi, Lily, the captain and the rest of the cabin crew on making this flight safe and enjoyable.  After about 4,800 miles and almost 11 hours, the staff was what I remembered after deplaning at Narita Airport. 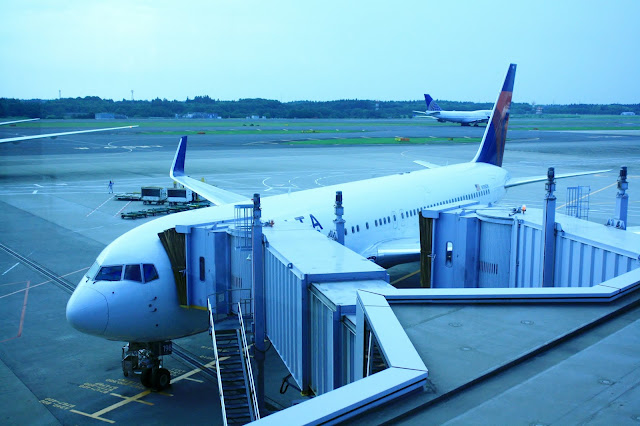 It's been five years, but Tokyo, I have returned!

Until our first meal in Japan, let's all get S.O.F.A.T.