Tokyo Metropolitan Central Wholesale Market (東京都中央卸売市場), more commonly known as Tsukiji Market (築地市場), allows a maximum of 120 visitors to tour the world famous tuna auction each morning.  Registration for the tour begins promptly at 4:00 a.m.  These 120 spaces on the tour are coveted spots, and registration for each tour is only allowed on the day of.  As a result, tons of Tokyo tourists queue up at the tour office before the sun even rises.  In anticipation of this race to Tsukiji, Ken and I hailed a cab and set out to the market around 3:00 in the morning. 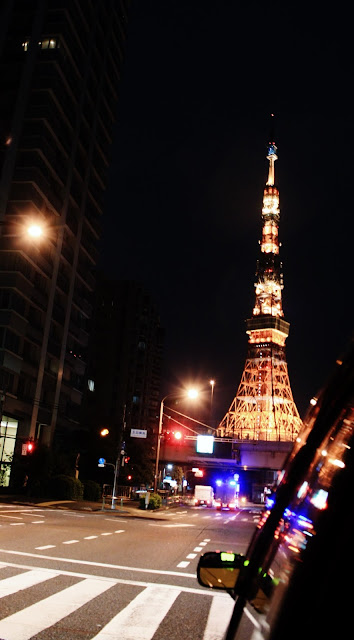 After putting our names down for the tour, we were herded into a waiting room along with the other tourists to await instructions and details about the auction.  Many visitors were sleepy, and some were still inebriated from the night's festivities, but there was a general buzz of excitement in the room.  We met some fellow travelers from America's Midwest that were just as eager to see the maguro.


The first group of 60 set off around 5:20, and the second group took off just shortly before 6:00.  We followed the guide directly to see the tuna auction in progress.  Several auctions were being prepared while we entered, and they were organized into sections around the warehouse.


Each section of the auction house has its own caller, and each of them have their own individual style and flair to the way in which they shout out the prices just like how our own American automobile auctioneers have their own unique method of calling out bid amounts.


As soon as the giant tuna is sold, it gets hauled away immediately, and the auction on the next fish begins.  That was the cue for us to leave too.  It was time for us to find a traditional Japanese meal of fish and rice. 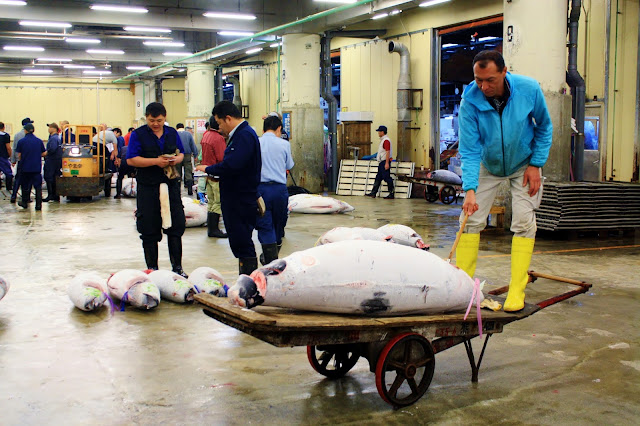 See more pictures and video from the early morning auction on my Flickr set here.