Since the last visit to the Del Mar Fairgrounds for the San Diego Craft Beer Festival in September, my buddy Mark (since upgraded from Uber driver status) and I have been eagerly anticipating more events at the racetrack.  Lucky for us the Bing Crosby season at Del Mar just started, and the Fall Food Truck Festival was storming out of the gates.  Another beautiful day in Sunny Southern California meant a quick trip down to the Del Mar Fairgrounds in blue-skied San Diego to soak up some sun, stuff our stomachs full of food, and wage a few bets on galloping equestrians.

Over 30 food trucks arrived including local favorite Carnitas Snack Shack, Food Network Food Truck Face-off winner Mess Hall Canteen, and the ever popular Cousins Maine Lobster.  These three had the longest lines as they were the most well known, but there were no lines for beer... none.  That meant that the queues were all but forgotten about by the time the last sip of brew was consumed. 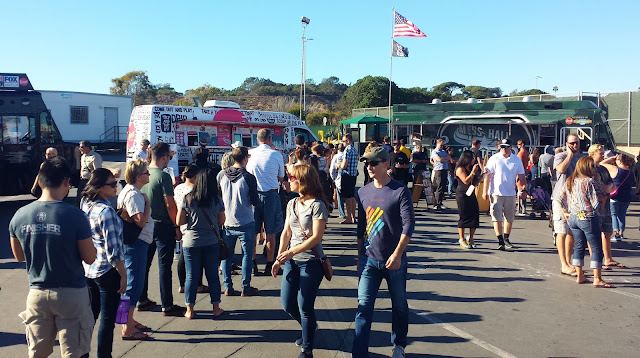 We headed straight for the pork.  What's better than an ungodly combination of shredded pork, bacon, and deep fried schnitzel? Nothing, I tell ya.  Nothing.  The carnitas, its house special, was so tender, juicy, and flavorful that the bacon was barely noticeable.  The Triple Threat Pork Sandwich cannot be passed up. 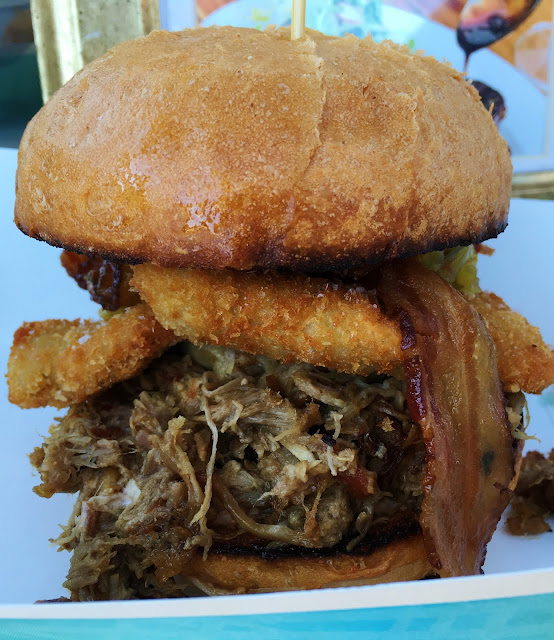 In addition to the Triple Threat sandwich, the Carnitas Snack Shack also makes a mind blowing Pork Belly App.  Upon first glance it looks like nothing more than a slab of charred pork, but one bite will make you fork the pork immediately.  The sweet and spicy glaze that glistens atop the slow cooked sexiness is what pulls the entire dish together.  The salad on the side, although overshadowed, is light and refreshing.  The frisee, apples, radishes, and lemon vinaigrette were a somewhat healthy balance to the substantial amount of sinful swine that we had just ingested.

We jumped at the chance for a lobster roll and clam chowder from Lobsta Truck.  The traditional split top roll was overflowing with New England's finest crustacean dressed lightly with seasoned mayo.  There was no mistaking the fresh lobster claws.  They were pointing straight at us from within the bread saying to us... you.  You... eat me... eat me nowww. 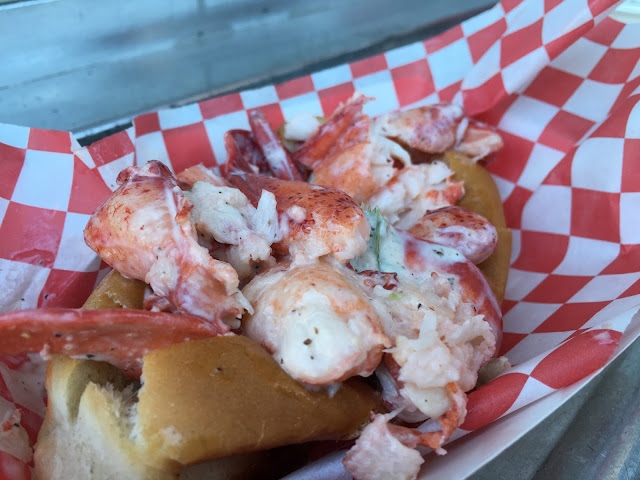 Every so often we would exchange glances (compliments in the food world) at others' food.  One item that caught our attention was the Kobayashi fries from Chop Soo-ey.  Criss-crossed golden waffle fries with crisp fatty bacon, streams of ranch dressing, and pico de gallo made for the perfect Asian fusion.  Wait, what's Asian fusion about these fries? Nothing, I don't care. 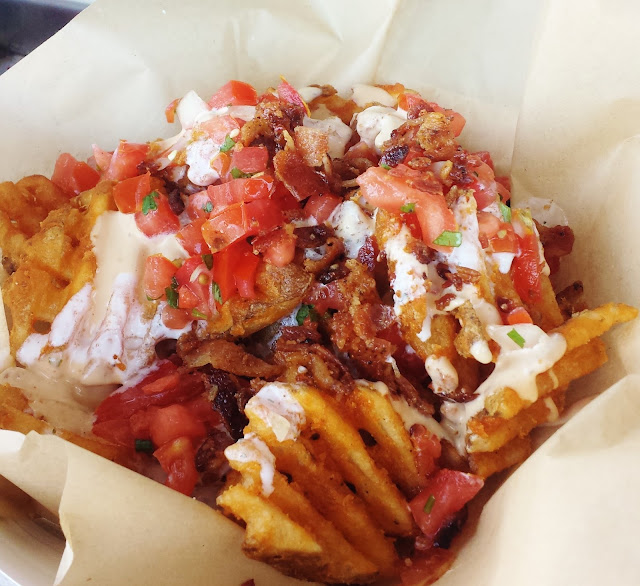 Think we had enough? Not us.  A trip to the fairgrounds requires a funnel cake.  It's obligatory to close off an already life threatening meal with more fat, sugar, and carbs.  Ice cream? Check.  Chocolate syrup? Check.  Whipped cream? Check.  Powdered sugar? Yes, please.  And strawberries to make the funnel cake healthy.  Oh, who are we kidding... 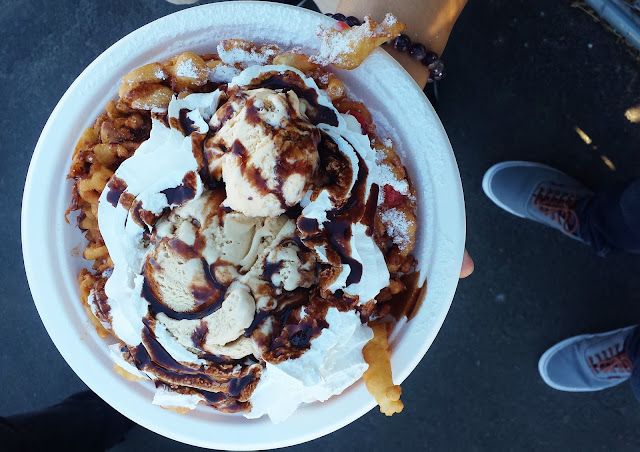 We interspersed the bites of food with chugs of beer and horse races.  There may even have been a few shots of Maker's Mark here and there.  (If your buddy's name is Mark, the Maker's Mark has to happen.  Gotta follow the rules, man.)  The biggest bet was made on Race 5, which was when Ice Cream Truck took the win.  It's only fitting that a horse named Ice Cream Truck wins at a Food Truck Festival.  More money for food and drink now... I'd call that #winning.