Walking out of Tsukiji Market (築地市場) down the main street of Shin-Ohashi Dori, we passed by many stands that offered sashimi over rice and some shops that sold ingredients for sushi making like dried nori and fresh wasabi root.  These stores are also part of Tsukiji Outer Market.  There was even a small food court just behind an entrance shielded by traditional blue Japanese curtains.  What really caught our attention was Kitsuneya (きつねや), the token food stand that sold hot beef bowls.  It smelled so damned good that it stopped us in our tracks. 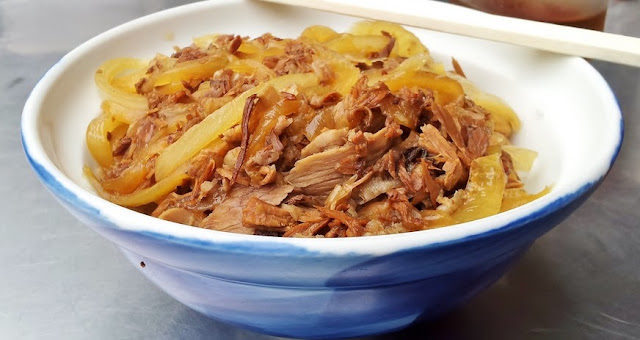 We ordered a gyu-don (牛丼) just to try it out.  The thinly sliced shreds of beef were infused with its own juices, and even the little curls of onion were browned, sweet, and bursting with beef broth.  This bowl of bountiful beef was an unexpected but very welcomed way of finishing off one of the most memorable breakfasts of my life.


Just a few primitive instructions makes it is possible to find this stand without knowing any Japanese.  There is only one stand that sells beef rice and noodle bowls on the main street of Shin-Ohashi Dori (新大橋通り).  Just past Harumi Dori (晴海通り) there are two freestanding makeshift stainless steel counters on the sidewalk near the curb of the street where people stand to eat their rice bowls.  Patrons with piping hot bowls of motsudon noodles eat while sitting at the counter.  There is a navy blue awning that reads きつねや in white Japanese lettering.  There is also a wicked eldery obasan who ladles broth at the stand.  She does not smile.  She does not like foreigners.  She does not like two people who split one bowl of rice and ask for two pairs of chopsticks.  If she is spotted, then that is where Kunetsuya sits.

For more shots of the Kitsuneya gyu-don, check out my Flickr set here.