Tastemade, a video making app for food lovers, invited food bloggers and industry cohorts to their studios in Santa Monica to attend a tutorial on how to get started with their new app for iPhone users.  Before the presentation began, however, we were treated to a glorious spread of food and drink prepared by local chefs and small businesses around Los Angeles.  Thanks to Alyse Gilbert of Tastemade I got how to see how they are "connecting the world through food."  It was Love at First Bite. 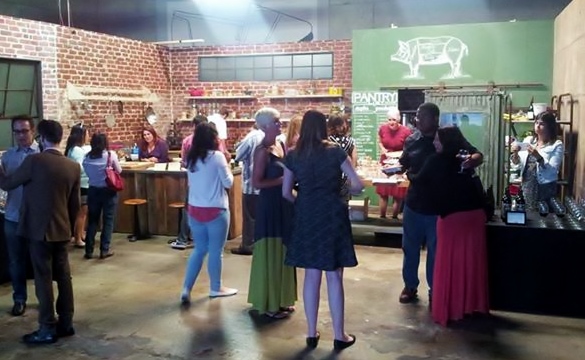 There were many wines featured at the event, including Truth be Told, which brought out a Pinot Noir and a Cabernet to share with wine aficionados.  However, the first drink that Celeste Perez, of Six Taste Food Tours and Empress LA, and I went for was The West Side Pisco Punch made with Peruvian Campo de Encanto.  It was impressively smooth... even smoother than the easy to drink Chamisul soju, a personal favorite.  It might be the reason why the bartender said that on one occasion he had finished an entire bottle by himself without even realizing it.  Impressive alcohol tolerance or just plain smooth liquor? You decide. 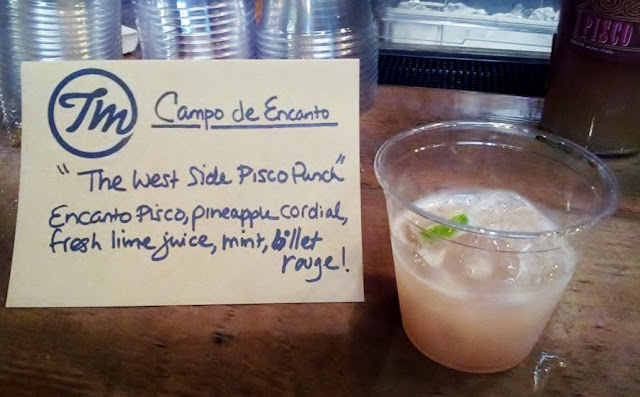 Our first stop on the tour around the studios was at the Cooking with WOW table.  Whitney Oakes Webster (ahhh... I see where she got the name) prepared an array of gazpacho filled into the centers of hollowed out cucumbers.  There were also row after row of colorful figs stuffed with folded curls of proscuitto, soft burrata, honey and garnished with vibrant, green basil.  They were beautifully presented, and we kept popping them into our mouths... to taste the different colored figs, of course. Next, we hurried over to the Bean & Thyme kitchen to try some of their porchetta sandwiches that smelled like heaven.  Although delicious what really blew my mind away was the cauliflower sandwich.  Now, believe me, I would never order a vegetarian sandwich on my own accord... let alone one made with cauliflower, my mortal enemy of the vegetable world.  However, with a bit of melted homemade American cheese and some runny eggs through the center of the sandwich, Chef Paul Osher turned my vegetable world upside down. 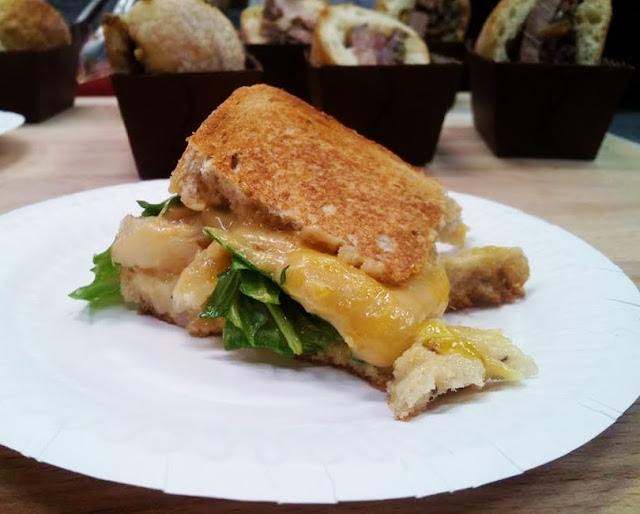 Sharing with kitchen with Bean & Thyme was Bruce's Prime Pickle Company.  The Chief Pickler himself Bruce Kalman was on hand to share his curried cauliflower pickles with golden raisins, cucumber kimchi, and Bloody Mary asparagus with garlic, horseradish and dill pickles.  The cauliflower here was also mind blowing.  There must be some kind of magic in that kitchen, I guess! Thanks for sending me home with some of those cleverly pickled cauliflower. 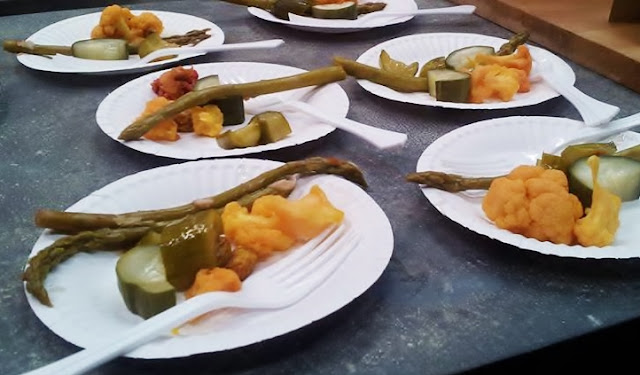 Way across Stage C were sounds of sizzling that prompted an immediate dash in that direction.  It turned out that Gavin Mills, chef and owner of Mills + Company was grilling up some grass fed beef sliders.  The charcuterie master put incredibly flavorful and juicy beef in between the softest bread possible.  At the same time his wife Jessica Mills was spooning chicken liver mousse over crostini and topping them off with pickled blueberry.  Did I mention that the mousse was equal parts chicken liver and butter? Uh... mazing! Thank you Jessica for also sending me home with a jar of that luxurious decadence. 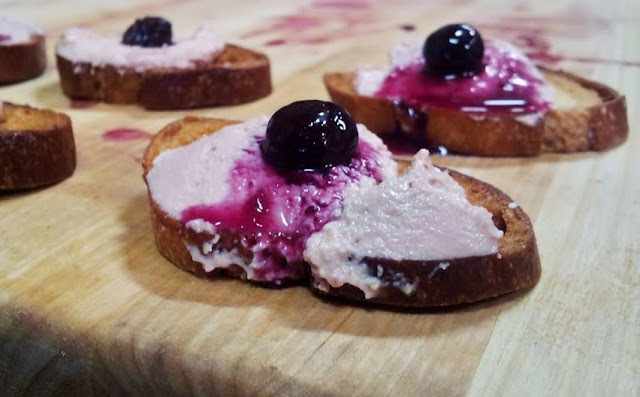 There is no such thing as a food gathering without dessert, right? Well, there was no shortage of dessert vendors at the event.  Celeste and I moseyed over to The Cheesecake Dude for some of the best bites I had all night.  Heather Kuklin (yes, she is The Cheesecake Dude) wowed us with three kinds of "totally awesome" cheesecake... a simple blueberry, Nutella banana, and the awesome maple and bacon.  Sweet, salty, and smooth all around, the maple bacon cheesecake was unlike anything I have ever tasted.  The Cheesecake Dude also made vegan and gluten free cookies that tasted nothing like the typical vegan or gluten free cookie.  Had you not read the sign that said that the cookies were vegan and gluten free, you would not have known.  But had you read the sign, you would not have believed it. 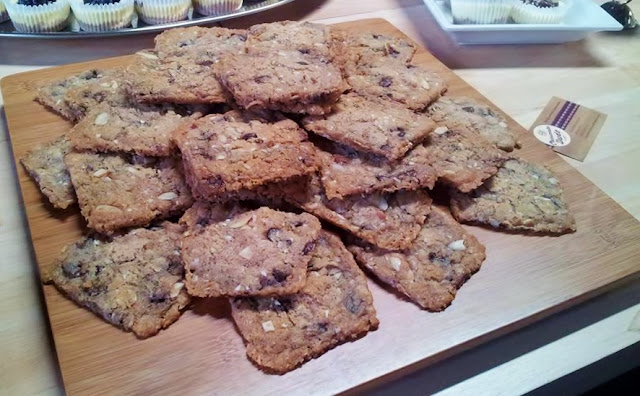 Down the stretch of desserts were the much talked about kouign aman, which described as caramelized sugar croissants.  Baked on Oceanview makes these mini versions of the traditional French pastries as well as mini versions of a seasonal summer peach pie. Also on site was also an old fashioned bubble gum machine except that it was filled with peanut butter and jelly macarons.  No coins needed.  We were also presented with meringues that were frozen with liquid nitrogen and when popped in would show us how to breathe like dragons.  What a way to end the night. 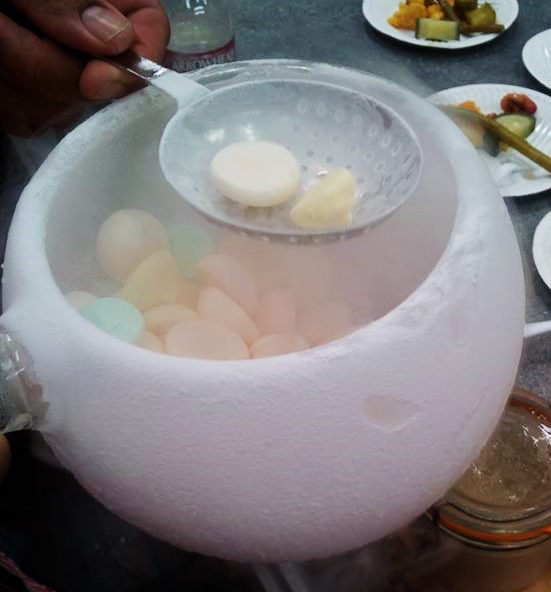 Thank you to Alyse and the entire Tastemade team for putting together this well organized and fun event.  It was great to see some familiar faces (shout out to Amy Shuster of Backyard Bite) as well as some new ones.  I'm looking forward to creating videos with the app and doing my part to connect the world through food.  Until the next event, let's all get S.O.F.A.T. 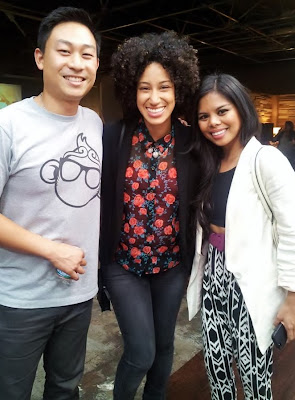 Check out my Flickr set for more pictures from the Tastemade event Love at First Bite.