Little Bird, the well known sister establishment of the even better known dining institution known as Le Pigeon, made little macarons.  They aren't featured on the menu, but I found them.  On our way back from Voodoo Doughnut with our arms full of devilishly decorated doughnuts, we passed by a window on Southwest 6th where I saw a young, female baker meticulously placing row after row of miniature macarons on metal trays.  I yanked on the door handle thinking it would lead me to a world of wonder, but it was locked.  The baker looked up and shook her head apologetically signally that they were not open.  But that didn't stop me. 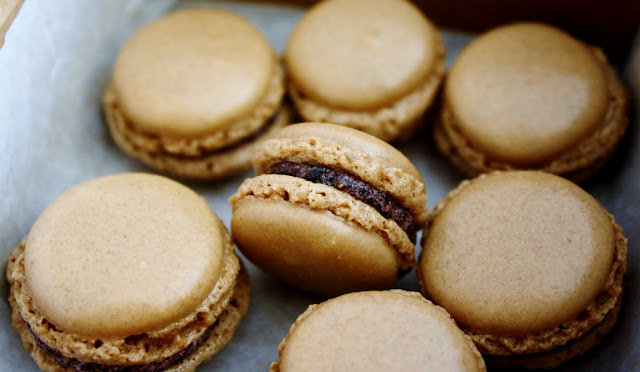 Apparently, the mini macarons were made as complimentary post dinner desserts for restaurant patrons.  The baker said they weren't even on the menu nor were they for sale.  In a desperate and somewhat forceful attempt at securing some of my favorite dessert treats, I began taking dollar bills out of my wallet and told her I would pay for them... I would bribe her to relinquish those little round treasures.  She gave in and packaged as many as she could into a brown paper box for me. 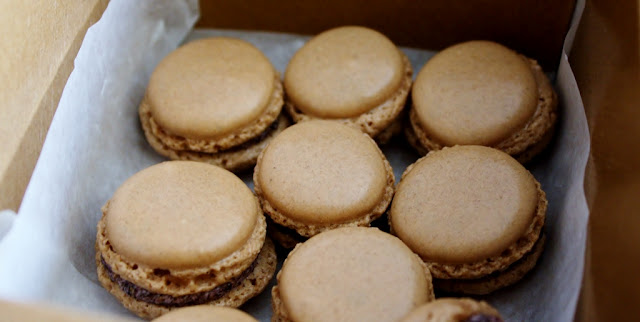 They were light and crisp upon first bite.  And once the bite sinks into the filling... oh, the filling... it was almost like a soft fruit leather, sweet yet ever so subtly tart at the same time.  The combination of fig and balsamic was compacted to one easy little bite.  I loved that the fig seeds would pop up every so often, reminding me that they were made from fresh fruit and not overly pumped with butter, cream and coloring like macarons from the mass produced chains.  These were the best macarons I have ever had.  Sadly, this exact flavor may not be on hand on my return visit as the flavors change nightly... from red velvet to oatmeal raisin to apple cider... but I look forward to what Little Bird has in store for my next visit.  Until then, let's all get S.O.F.A.T.