On Saturday Amanda led me on a culinary excursion of Japanese cuisine in Vancouver.  We started off with sushi rolls at a Korean-owned Japanese restaurant... and headed for Japadog, to a Japanese perspective on an all-American item... and ended up experiencing some truly traditional Japanese izakaya.  Each meal was a progression of increasing authenticity.  Oh, and don't forget about a pit-stop at the Taiwanese Film Festival in the afternoon.  Oh, what a very awesome day.

Sushi for breakfast? Well, technically... it was noon, so it wasn't quite breakfast.  But I designate my meals not by the time of day but by the order in which I have it.  It was my first meal of the day, ergo... sushi for breakfast. 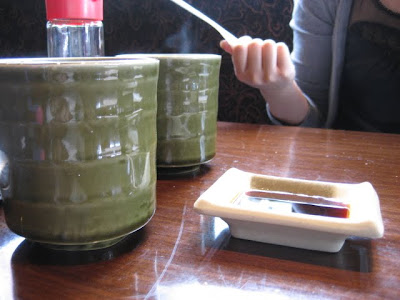 Do not mix.  Green tea.  Soy sauce awaits the first dip of sushi.
We had sushi for breakfast at Sushi Garden, a Korean-owned establishment in Burnaby that locals frequent for their creative rolls and affordable prices.  Our spread: 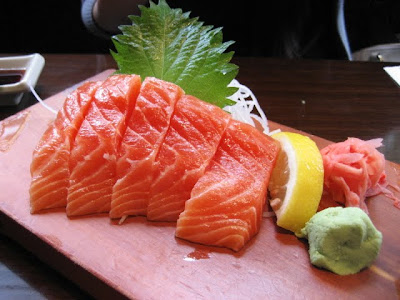 Salmon sashimi.  Half order.
The cuts were way thick... like steak rather than sashimi. 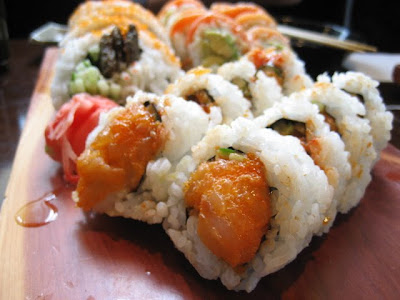 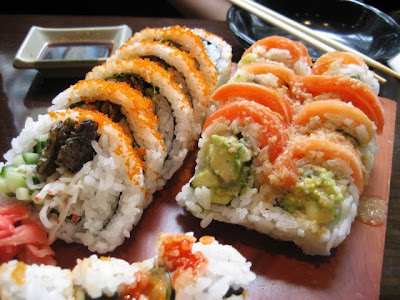 Side by side.  The B.C. roll with salmon skill.
The Alaska roll with avocado, tobiko and salmon. 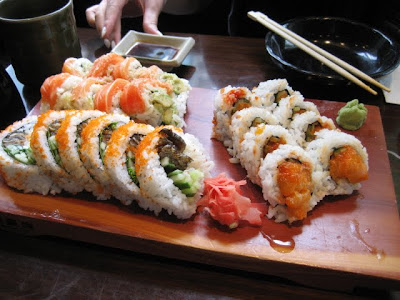 All together now.  Three rolls.  Two people.  One plate.  Yum.
Had there been more time (or room in my stomach), I would have chosen the Dynamite Roll, Hawaiian Beef Roll, the Crab Loves Papaya (deep fried crab meat), the Spider Roll (because soft shell crab is damned delicious) and maybe even the Chi-Chee Roll (baked chicken with mozzarella cheese).  Next time! But for now... some digestion... and more eating...