Breakfast: From Doughnuts to Dim Sum

I was set on having some delicious dim sum for breakfast on my first full day in Vancouver, so I woke up bright and early and hopped into the apartment's gym for a workout to motivate my metabolism into a manic mode.  I was ready to eat! But alas, dim sum in Canada apparently doesn't get good until close to noon.  So Amanda took me to two pit-stops to pass the time.

Pit-stop 1: Bank of Montreal for some USD-CAD forex (not that exciting)
Pit-stop 2: Tim Hortons, Canada's largest coffee and doughnut chain (much more exciting) 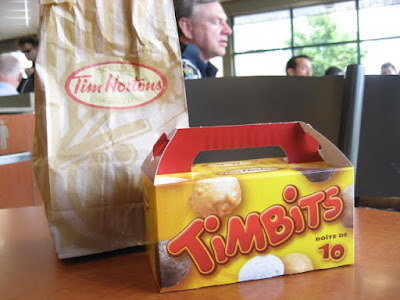 Warming up.
After stretching my stomach with doughnuts, I planned to capitalize on dim sum.
According to Wikipedia (my flawless source of go-to, get-it-quick information) Tim Hortons surpasses McDonald's in fast food sales and knocks Starbucks out of the ballpark in Canadian coffee sales.  Wow, the Canadians must really not like us that much. 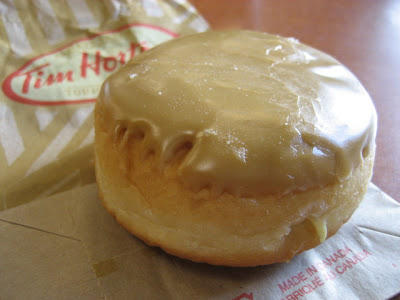 The Canadian maple.  The center is filled with maple-flavored custard.
You can't get anymore Canadian than that.
I had noticed the unexpectedly high number of customers at a brightly-lit Tim Hortons on the way back to Burnaby the night before. Either nothing else was open, or this doughnut store is that good. Turns out, it's both. 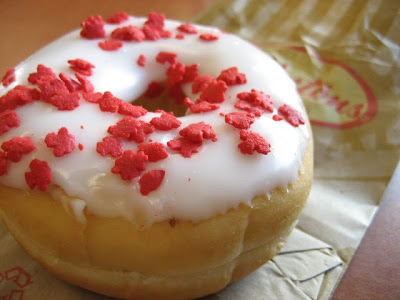 Highly patriotic.
The sprinkles are in the shapes of maple leaves.
Tim Hortons gets pretty creative when it comes to fashioning their doughnuts.  The sprinkles on the Canadian doughnut, made especially for Canada Day (July 1), screamed patriotism with its bright red maple leaves.  I mean, we've got red, white, and blue doughnuts in America... but I've yet to see an Independence Day doughnut with sprinkles in the shape of stars and red and white striped glaze.  Granted, that doughnut would be a lot more complicated to make, but I'm pretty sure Krispy Kreme can manage. 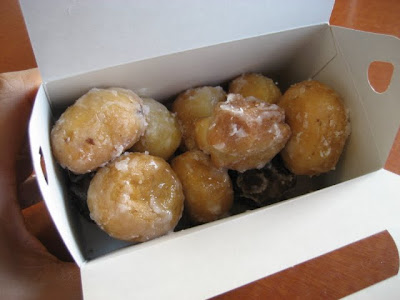 Tim's tiny bits.  I chose at least one each of...
the apple fritter, dutchie, honey dip, sour cream glazed, and chocolate glazed.
The doughnut holes at Tim Hortons (called Timbits) are pretty frickin' creative too.  They don't only have the simple glazed doughnut hole (a few tossed in with each purchase at the local shop in the USA), but they have over a dozen different flavors.  From the apple fritter to the honey dip to the sour cream glazed, it was tough to choose just 10 for my box. 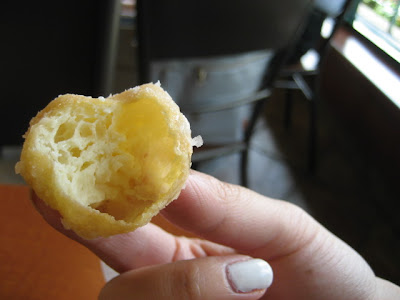 Pretty and porous.
Amanda pinches the golden inside of a honey dip Timbit.
No worries.  All I needed was a little snack... just a little something to warm my stomach up for... dim sum! So I moved from doughnut holes to dim sum... from one bite-sized item to the next bite-sized item.  Here's a look at the mass of munchies from East No. 1 Seafood Restaurant (第一樓海鮮酒家) that Amanda and I challenged ourselves to: 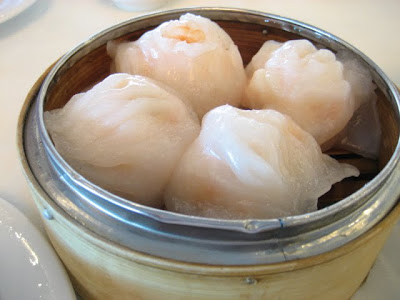 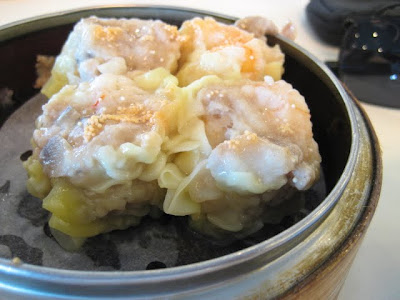 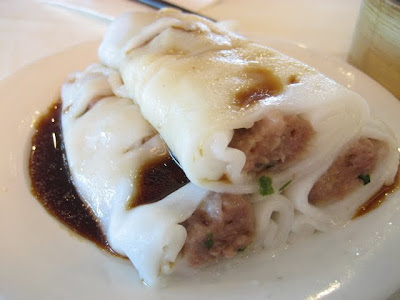 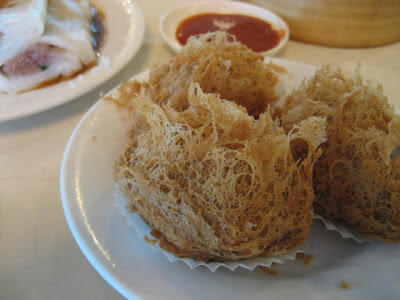 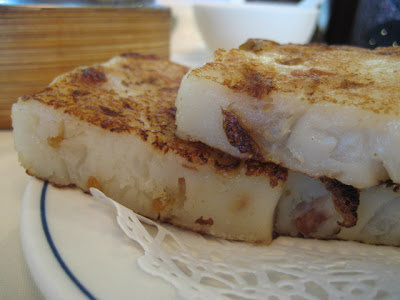 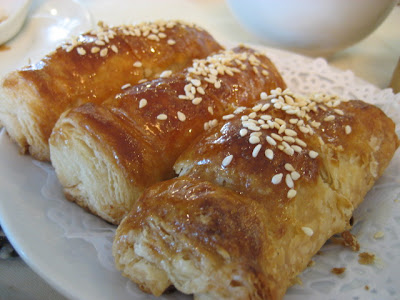 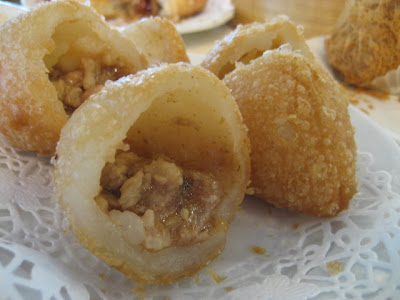 Ham sui gok (鹹水角).  Literal trans: salty dumplings.
Ground pork and diced mushrooms fill the interior of the football-shaped mochi dumpling.
Vancouver is quickly becoming the new mecca for Chinese food, especially Cantonese cuisine.  Top restaurants in Vancouver have lured the best Chinese chefs from Hong Kong away from their homeland in order to employ them in the highly competitive market of Cantonese cuisine.  As one of the world's most livable cities, Vancouver can be a good enough reason in itself for the chefs to move.  It's no surprise that dim sum all over Vancouver has to be good... or the restaurant is ruined.  Amanda and I continued to see regulars savor their favorite dim sum dishes as dim sum newbies practiced their Cantonese (and their chopsticks).  It's safe to say that East No. 1 Seafood Restaurant has survived the generations and will continue to do so.

(7 dishes x about 4 per order) / 2 eaters = approximately 14 super big mouthfuls per person.  I was so stuffed, especially because the doughnuts, which I had previously thought would stretch my stomach out, actually cushioned the dim sum as it landed in my stomach.  Eek.  But a successful dim sum brunch, nonetheless.  How much breakfast can I eat? Quite a bit, I guess.


All Romanizations were translated from Cantonese rather than Mandarin to reflect the Cantonese origin of dim sum.
Next post: Lunch!