After a fully-loaded breakfast, Amanda and I did as much digestion as we could.  Our digestion workout included:

(1) looking for dramas - specifically Taiwanese and Korean dramas at the small Chinese-owned DVD store downstairs from East No. 1 Seafood Restaurant...

(2) finding unique potato chips - and gasping at the many odd (and ever-so-cool) varieties of President's Choice brand potato chips at the Real Canadian Superstore...

(3) shopping - getting lost in racks of clothing and tables of shoes at J2... I really shouldn't have bought anything because my luggage was about to burst, but I couldn't walk away from this jacket (orig. CAD 260 on sale for CAD 60).  Yeah, like I was about to let that one go? 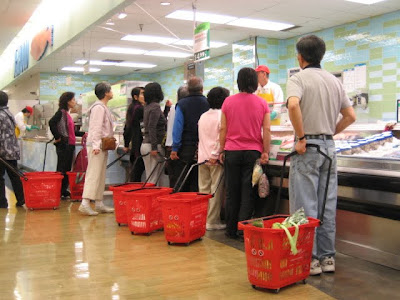 Miniature baskets on wheels! Shoppers await their fresh fish... it's oddly cute.
My guide thought it was strange to take a picture of this.
(4) grocery shopping - at T&T Supermarket (Canada's largest Chinese/Asian supermarket chain... it's their version of our 99 Ranch Market)... but we bought nothing more than Canadian maple nougats and imported Japanese Kit Kats.  Did I mention we took advantage of the endless samples of ramen, potstickers, and bottled tea? We took a step back in our goal of digestion here...

(5) singing - Amanda has a 20-track compilation of Mariah Carey classics and remixes in her car... it's hard to resist when "Always Be My Baby" starts playing...

But enough digestion! It was time for lunch!

We jumped from Metrotown across the street to the food court at Crystal Mall for some inexpensive (AKA really good prices) eats.  Crystal Mall's food court offers everything from traditional Cantonese-style BBQ pork and duck to Malaysian noodles to Taiwanese beef noodle soup to spicy hot pot to fresh juice bars.  The variety is pretty impressive, but the xiaolongbao (juicy pork dumplings) from Wang's Shanghai Cuisine impressed me even more.  It's no wonder Wang's won an award from the annual Edgewater Casino Chinese Restaurant Awards for best Food Court Dish. 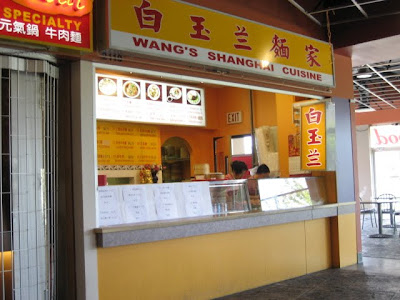 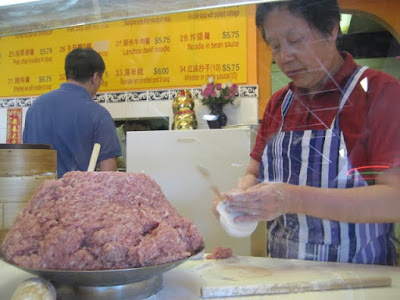 Jiggling mountain of pork.  A Wang's employee wraps the dumplings by hand.
She also thought it was strange to take a picture.
DTF's dumpling is like the princess who bruised from sleeping on a pea hidden underneath 100 mattresses.  She's prone to breakage, and one mistaken poke in a sensitive area could mean a burst of burning juices.  Regardless, her feminine daintiness is alluring, and the waft of her fragrance tempts you to find out what else is underneath her skin. 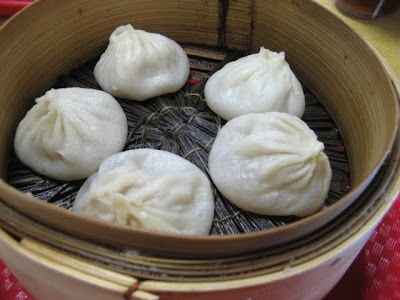 The pleasurable palm-sized dumplings.
Wang's skin is thicker than Din Tai Fung's but still easily breakable.
Wang's dumpling is more like a sumo wrestler.  It's huge... it's meaty... and it jiggles like Jello.  Trying not to break the skin, although slightly easier to prevent than at DTF, is still tough... because no matter what, you don't want to rub a sumo wrestler the wrong way.  One wrong nudge for Wang's dumpling could spell a collapse of dumpling skin and a disastrous deluge of pork juices... and one wrong nudge for Yokozuma could mean that you're lying under endless folds of sumo skin and sumo sweat.  Eek. 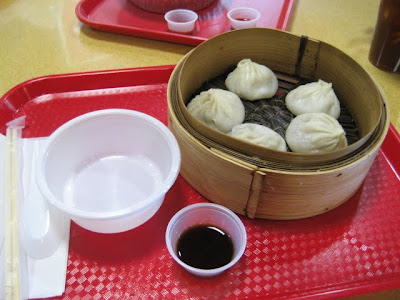 Logically and tastily sound.
The dumplings come with an extra bowl for the sole purpose of catching leaking juices.
Dainty or powerful, princess or sumo, Din Tai Fung or Wang's... the differences are clear.  But what they do have in common is that they're both GOOD AS HELL.  What I will say, though, is that because Wang's dumplings are that much bigger, my soup spoon was thoroughly filled to the brim with pork juices.  Ahhhh... slurping that up was comforting yet unnervingly addicting at the same time. 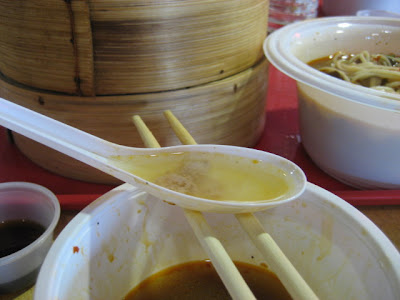 Soup for slurping.
At times, the spoon is not big enough to hold the entirety of pork juices.
Wang's was so good, in fact, that I returned on the final day of the trip to have two more long (steamers) of the award-winning xiaolongbao.... and some of their Shanghai-style noodles, a soup-noodle that is prepared with potatoes, carrots, and soy beans.  The noodles are a bit harder to enjoy if you haven't grown up on them, but the local specialty surely provides a comforting hug for those who are homesick for Shanghai. 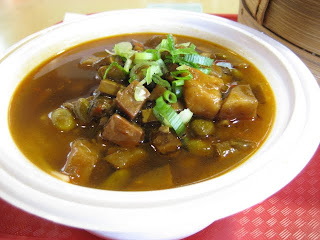 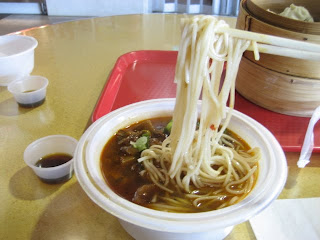 Shanghai homestyle noodles.
The noodles are buried under a heap of diced potatoes, carrots, and soy beans.
Finishing all those baos meant just one thing... another battle with digestion.  So? Some more tortoise-paced walking around Crystall Mall... digestion will ensue 'til the next meal...