As a change of pace from the typical Friday night, some fellow foodies and I decided to run the town and do some taco tasting. After dinner three of us set out a plan of attack to taste as many taco shops in Los Angeles in one night as we could. Quite frankly, it's impossible to hit up every famous taco stand, shop, and truck in LA, but in one night we got to 5 different shops in just a little over 5 hours (and 80+ miles). Here's what happened:
Stop #1 - La Dona taco truck - 9:00 p.m.
SE corner of Duarte Road & Rosemead Blvd. (San Gabriel) 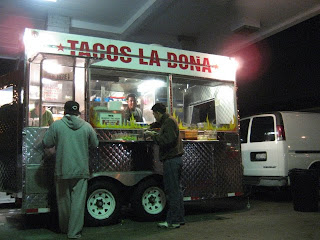 Locals only. Some patrons arrive by foot in their pajamas.

In an empty gas station parking lot, local residents arrive on foot to order their late-night snacks. The meat was tender and flavorful; the salsa was spicy and fresh. There wasn't anything else that I needed at that time... except cilantro. How can you not have cilantro with your onions and salsa? What a shame. The silver lining was that La Dona made the al pastor with grilled onions, and they sliced their radishes up so that I could toss some on top of my taco mound. After warming up my stomach for the night's taco run, I picked up Diana and Duke, and we were on our way. 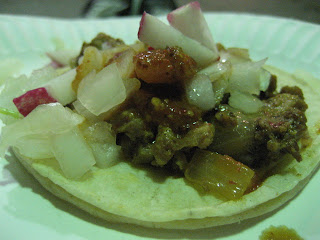 No cilantro. No fun.
Despite the lack of green, the taco is still full of flavor. 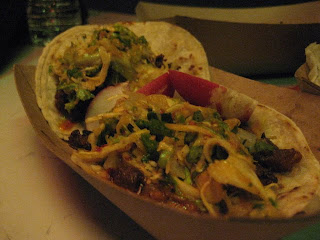 Searching for the Kogi truck along Abbot Kinney Blvd. was like going through a Where's Waldo of taco trucks. Lined alongside the road were trucks left and right... delicious delicacies everywhere! Unabated by our temptation to stop at the other trucks, we made our way to Kogi, which didn't have a long line to our surprise. (I have a sneaking suspicion that the newer trucks may have done damage to Kogi's market share.) 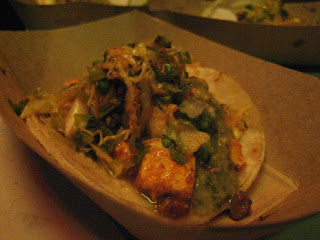 
While Diana and I decided on the spicy pork taco, Duke announced that he would ask about the special of the day. (I now secretly wished that I had done that too, but thankfully I got to have a bite.) Kogi's special of the day turned out to be mulitas containing shredded chicken on the inside and a searing salsa roja,. After taking a bite of the mulita, I became delusional from the deliciousness, and I almost lost all focus on the tangible names of the ingredients. The salsa that was seared on the hood of the mulita was good enough to substitute as gravy on mashed potatoes. Absolute heaven. A few more bites, and we said kamsamhapnida to the Kogi. 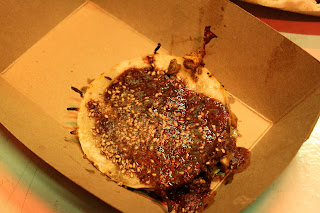 Don't judge a book by its cover.
The mud topping is actually a sizzling salsa roja on this magnificent mulita.
photography by DWC

Stop #3 - Flying Pig truck - 11:45 p.m.
Abbot Kinney Blvd. (Venice)
On the way back to the car, we noticed the baby pink Flying Pig truck parked across from the Kogi truck. Based on a friend's recommendation, we had no choice but to stop and have a taste. 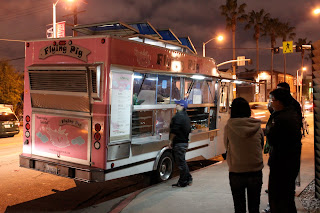 Pigs have finally flown.
I never thought Taiwanese-style buns would have ever come from a truck.
photography by DWC

To my surprise the menu was based off of many of the traditional buns from Taiwan and China. Diana ordered the braised pork bun, inspired by a Taiwanese bun shaped like a pac man called gua bao (刮包). Traditional Taiwanese gua bao is also made of braised pork but is garnished with cilantro, crushed peanuts, and a savory mustard green. Flying Pig's version is accompanied with cooling cucumber slices. 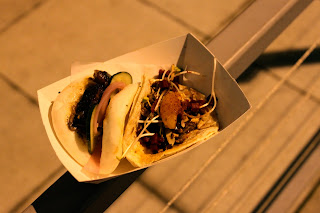 Flying Pig's tamarind duck taco was quite an impressive reconstruction of the traditional Peking Duck dish. Rather than flavoring the duck's skin with the almond scent as chefs of Peking Duck do, Flying Pig dropped sliced almonds in between the warm tortillas, and a single Mandarin orange wedge was placed to substitute the orange glaze that typically accompanies the traditional crispy duck. Props for creativity. Done eating... off to Pinches!
Stop #4 - Pinches Tacos - 1:00 a.m. 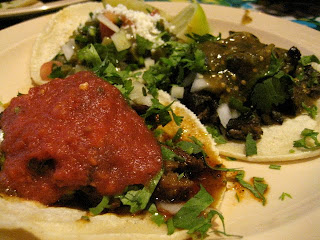 A pair of Pinches.
The al pastor taco (front) and the carne asada taco (back).


Someone I know is always raving about Pinches, so we put this down on our list of taco shops to try. What really captured our attention at Pinches was not the carne asada or the al pastor but the cactus taco. Having cactus was a first for all of us. Taste like chicken? More like a pickled bell pepper. Is it prickly? The texture is a bit slimy like okra. Would I try it again? Probably not. Pinches wraps the taco innards with just a single layer of tortilla, which subtracts from the strength and sturdiness and lets the meat fall to its peril on the plate. Fail.

We also tried the guava flan, which was posted on the chalkboard as a special for the day. I could tell that the resins from the guava pulp had sunk to the bottom of the flan, but the flan itself could have had more guava oomph. We left a bit disappointed, but I was sure that King Taco would redeem the reputation for renowned tacos. 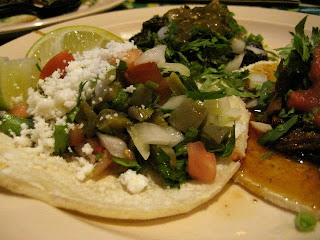 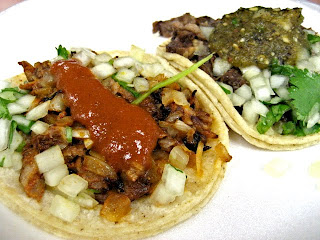 A little bit goes a long way. Taco al pastor with a touch of salsa roja.

King Taco is a childhood favorite of mine. Their al pastor is one of the best in the business, and their salsas are to die for. The salsa roja was like lava on my tongue, and it helped spark my appetite a bit, so I pressed on with the cabeza (beef head) taco. It sounds like it may prompt gag reflexes into action, but it's simply the most tender (and fatty) meat from the head, not the brain. The taco cabeza has a flavor that is not loved by everyone, but it is something everyone has to try. The char from the salsa verde complements the carne de cabeza perfectly, but by this point in the night, I could barely hold down another bite. Tiempo para regresar a la casa. 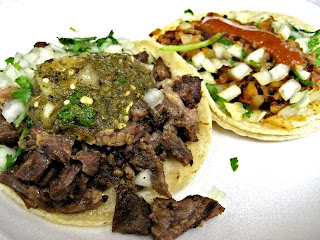 The best head (tacos de cabeza) I've ever had.
King Taco makes the best tacos de cabeza and salsa verde.
Tacos has got to be one of my favorite foods of all time. Seriously. Carbs, meat, and vegetables (sometimes) all in just a few bites... what other food can do that for ya? But 5 taco shops in one night resulted in an absolute food coma for me. The entire drive home Diana and Duke had to suffer from their own gastric catastrophes while listening to my cacophonous cries, "Ohhhhhh... my estomago..."

Until next time y'all, let's all get S.O.F.A.T.
Mentions:
Photography by Duke is featured in this post...
... and thanks to Diana for playing human GPS... fail.