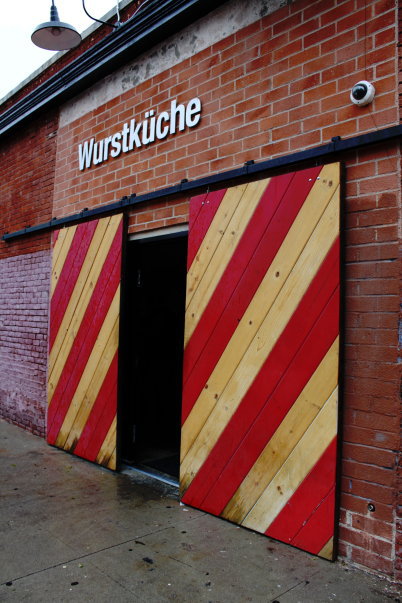 Welcome to Wurstküche.
Wurstküche sits in the reviving Arts District just east of Little Tokyo.
A friend visited from Korea unexpectedly and had a craving for everything American, so we decided to grab lunch at Wurstküche. In retrospect, that wasn't the most American food that we could have eaten... but there are plenty of grilled German sausages alongside dozens of ice cold draft beer from Deutschland and its neighbors. Who's to argue over what's truly American? So on another rainy February day in LA, we found a haven in grilled sausages and ice cold beer. 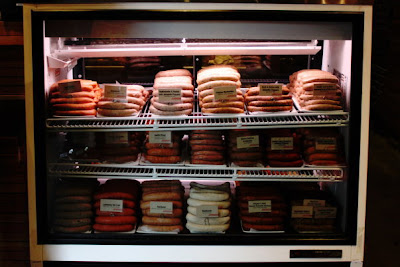 The menu. Sausages range from your basic bratwurst to
more eclectic choices such as duck, rabbit, and alligator.
Having had a few of the classics (bratwurst, hot Italian) and gourmets (chicken apple, kielbasa) on previous occasions, we ordered decisively from the exotics section. A duck & bacon for me and an alligator & pork for her. To drink? BIER. 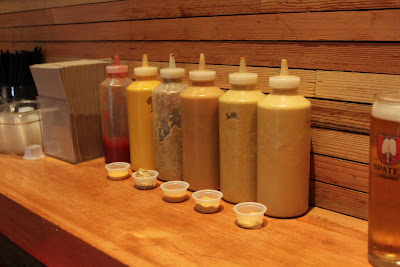 Single file.
A selection of mustards line up for their taste test.
We spent so much time trying to make sure that we had every type of mustard (ketchup + sausage combo is a no-no) that the fries were ready before we even sat down. Note to friends for next time: there are plenty of mustard squirt-bottles at the tables, so preemptively hording resources like squirrels is absolutely unnecessary. 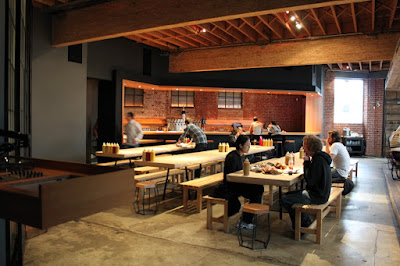 Inviting interior.
Although brightly lit at lunch, the dining room has a different feel at night.


The fries must have come from large potatoes because fries that are that thick typically are cut in wedges. These were fries. Crisp and golden skin encased the fluffy and steaming potato inside. For God's sake they were fried potatoes! We chose the chipotle aioli and bleu cheese with walnut and bacon for our dip. 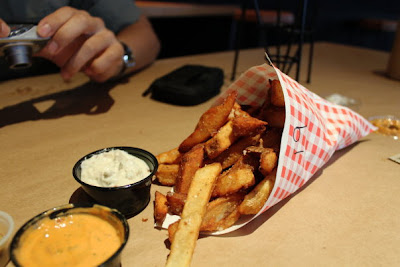 Singing the bleus.
The bleu cheese dip with walnut and bacon is one of my favorites.

The tzatziki and the pesto mayo are good pairings with the fries too. Other frequenters of Wurstkuche opt for the white truffle oil glaze, but who were we kidding? It was a Tuesday afternoon. 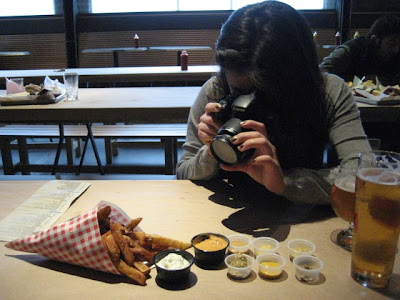 Take a picture.  It lasts longer.
Halfway through chomping through my duck & bacon, I looked over at my friend. I almost choked. The two squares of the ends of the roll was all that was left in her metal container. Rina had already finished her alligator & pork sausage. Wiping crumbs from her mouth, she declared, "I want another one. Will you split it with me?" 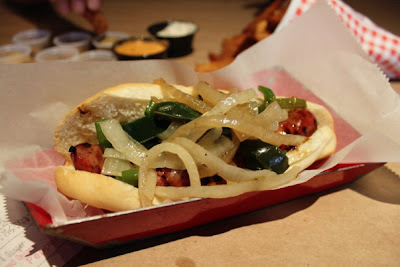 Duck & bacon. With spicy peppers and grilled onions.
That was one of those pseudo-rhetorical questions that begs an unrequited response. Who's to say no to more sausages? "Sure, as long as you finish your beer!" 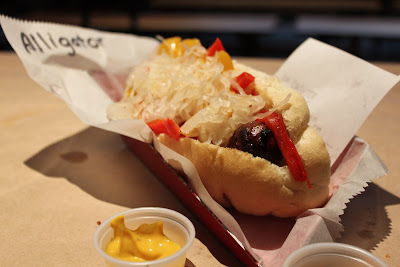 So Rina disappeared to the front of the house, and another sausage arrived: apricot & ginger. "I'm just trying to eat all the foods I miss before I head back to Korea for work," uh huh... By this time we were peeling the roll off the sausage the way you have to peel a banana to eat it. It was all about the sausage now. The bread didn't matter anymore... and neither did plans for the rest of the day. An inquiry: "You still wanna get cupcakes?" 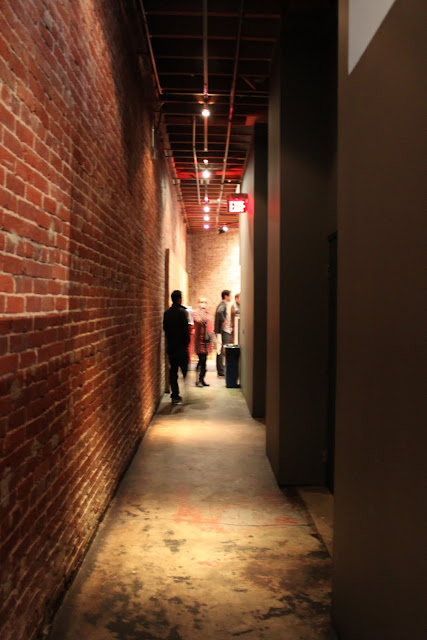 Auf weidersehen.   If only Heidi served sausages here.
Until next time let's all get S.O.F.A.T.
Mentions:
Photography by Rina is featured in this post. Thanks for the socks!