Sometimes cravings hit me the same way a heavyweight boxer gets jabbed in the jaw by his opponent. WHAAAAMM. It's nothin' but pain. Today I got a slam in the stomach that left me crying for curry, and the only way to cure the pain was to conquer the craving.

My favorite spot for a quick conquering of my Indian curry craving is Punjabi Tandoor, a hole in the wall hidden amongst techno-corporate office buildings in San Diego's Miramar region. With about a dozen tables total (inside and on the patio) and most of their curries pre-made, I would never call this a restaurant... but this 'shop' does provides an instant remedy for the pain caused by my curry craving. 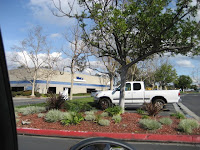 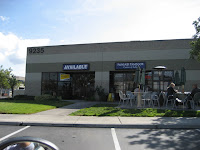 Can you find it? Punjabi Tandoor is hidden between corporate office space.


My meal was a boxing match against five curries. Here's how the fight (MICHAEL LIN vs. CURRY SINGH) played out:

Biting into these samosas are a combination of pain and pleasure. The steam fills the caverns of your mouth so quickly that you don't have time to scream, but the intensity of spices from the peas and potatoes leaves you panning for more. Good thing the samosas come in pairs! 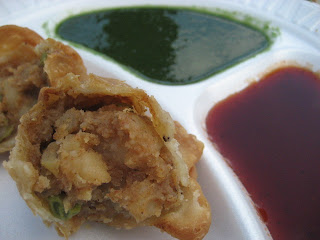 Crispy and fluffy vegetable samosas.
Broken apart and basking next to pools of chutneys.

Round 1. The first punch - SAAG SPINACH CURRY
The spinach curry is the first punch to your face... BOOM. Like... damn. Where did that come from? It's a sobering wake up call that announces that the fight has begun. The creaminess of the spinach curry fooled me at first, but trust me when I advise you to never underestimate your opponent. The adrenaline starts pumping, and drops of sweat have begun to roll down the side of my face...


Round 2. Footwork and blocking - CHANNA CHICKPEA MASALA
Getting hit for the first time signals your body to immediately guard against another attack. Put your arms up, and cover your face! The chickpeas in this curry are a bit bland in comparison to the spinach curry, but it provides a defense against any other attacks of spiciness. The channa masala is the dance of the footwork that helps prepare for the next jab. 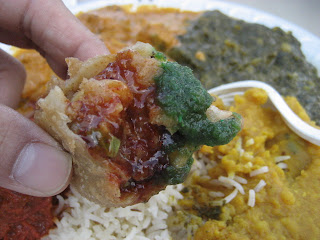 Topped off with a yin and yang of chutney.
The green chutney has a spicy yet minty kick, and the red chutney is sweet like molasses.


Round 3. The unexpected uppercut - SHREDDED CHICKEN TANDOORI
I expect spicy food to be brightly colored as a natural warning of impending digestive disaster, but deceit in this surprise lies beneath the curry's dull, crimson color. While the spiciness from most other curries hits the top of your tongue, the blow from this chicken tandoori hits the underside of your tongue like an uppercut to the bottom of your chin. BAAAAAM. It hits so hard that it throws the sweat right off my face.

Respite between rounds - PANEER TIKKA MASALA
After getting a brutal pounding in the first round against Curry Singh, paneer tikka masala provides a rejuvenating respite between rounds. Don't get me wrong; the curry still stings, but the delightful dairy soaking in the tub of the curry is like the sponge of relief that the trainer uses to wipe down your sweat. The curry that the paneer floats in is like the squirt of Gatorade in your mouth that replenishes your body. It still stings a bit, but it helps you strategize your next move. 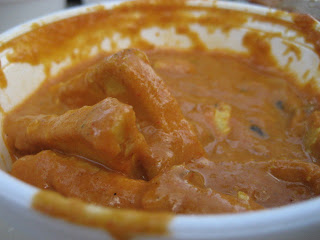 Final round. Fight to the finish - CHICKEN TIKKA MASALA
The final round in a fight is the one that inflicts the most pain. The aggressor jabs, hits, and punches in such a frenzy that the opponent collapses in a total knockout. This chicken tikka masala jabbed, hit, and punched my taste buds with such a drunken rage of spiciness that I was overcome with an invigorating rush to defeat the curry. I didn't want to throw in the towel, but Singh delivered a final blow of spiciness so great that my tongue collapsed in defeat.

Post-fight massage/rub-down - MILK KHEER
After an utter defeat of currgantuan proportions, my taste buds needed a cleansing just as much as heavyweight boxers need post-fight massages. The cleansing for my taste buds came in the form of a milk-based, sweet rice dessert called kheer, comparable to Southeast Asian tapioca desserts (西米露). Providing a much-needed relief after a spicy meal, kheer allows the eater to rest from battle and regain the strength and endurance needed for the next match. 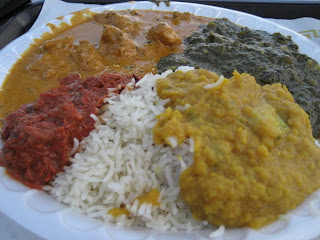 Lin vs. Singh: in the green corner is saag spinach curry.


After a traditional southern Indian wedding last November, I couldn't get over my hankering for delicious Indian food. Although the state of Punjab is not part of southern India (it's closer to the Pakistani border), Punjabi Tandoor calmed my craving for curry. The samosas, the chicken tikka masala, and the paneer were my favorites... hands down. Perhaps vegetarians would enjoy the channa masala more than I did (as my Lydia the newfound vegetarian had). Judging by Myung's plate (six curries; plate completely demolished), he enjoyed everything.

Mentions: Aparna, we share a very important and special date! Thanks for giving me a first-hand glimpse at southern Indian traditions. I hope I can provide the same generosity and hospitality with my culture's traditions in the near future too...
Anisha, for telling me about this place and 'promising' that you would take me... and then seeing you there when I went myself! This place is bomb... thanks, Ms. Sakariya!
Aman and Janaki, the first Indian friends (Punjabi and Gujarati... I still remember) I met at school; one whose mom cooks the most amazing and memorable home-made Punjabi food ever and one who has allowed me to drunkenly sabotage her vegetarian diet... but only once!
Myung, thanks for driving. Enjoy your time here before heading back to Seoul...
Lydia, welcome back to USA. We'll get some 蔥抓餅 soon!
Anna, I was put in a bad spot... between a monster and a vegetarian!