At this time two years ago, I was spending my Lunar New Year in Taiwan with extended family, and I was preparing to travel to China for a semester of studying abroad. It was one of the coldest and wettest winters in Asia in history. It poured non-stop in Taipei. Coincidentally, it has been pouring non-stop in the States this winter as well. When it rains here at home, I am inclined to curl up in the corner of the couch with a comfortable cup of cocoa. But when it rains in Taiwan, my inclination is completely different... I want to grab the nearest umbrella and dash out the door for a bowl of beef noodle soup (牛肉麵). 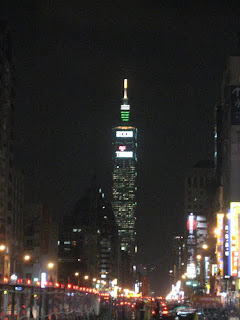 En route to beef noodle soup.
Taipei 101 was still the world's tallest skyscraper in 2008.
My favorite beef noodle soup in Taiwan is made on the streets of Taipei by a gentleman by the name of Mr. Chao. It is not a restaurant or even a cafe, nor is it close to being a hole in the wall. It is a stationary stall that sits in the same exact location every day of the year, rain or shine. The shining star of the stainless steel stall is an enormous kettle that Mr. Chao employs to bring beef broth to a boil. It is rolled away with the equally enormous gas tank into a nearby hole in the wall that is shared by the neighboring street vendors, many of which are beef noodle soup stalls as well. The only other permanent fixture is the sign that reads Old Chao's Noodles (老趙刀切麵). 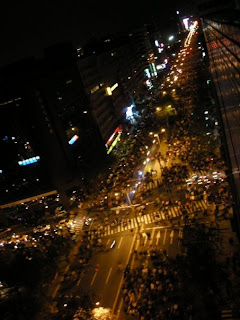 Three's a crowd. The bustling streets of downtown Taipei.
Each one of Taiwan's 23 million citizens has a favorite location for beef noodle soup.
Everything about Mr. Chao's noodle business seems simple. The name is straightforward, and the menu consists of just a few items: beef noodle soup, beef soup, or just noodle soup. But Mr. Chao's seemingly simple noodle shop isn't simple in the least. During off-peak hours the noodle stall turns into a complex noodle production factory complete with an assembly line that includes Mr. Chao and his son Chao, Jr. 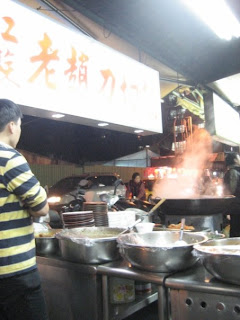 Mean metal. Almost everything at the stand is stainless steel.
The wok roars with a ready flame for roasting chilies.
A kitchen cleaver is unsheathed. Shing! Young Mr. Chao begins to dice pickled mustard greens (酸菜), a complementary (and almost mandatory) after-purchase addition to the soup. Each person adds more or less and adjusts the flavor to his or her taste. At the same time, older Mr. Chao reveals a wok and begins to quick-fry chili peppers and with green onions in a searing hot oil. The peppers are perfect for patrons who want their soup spicy. Within minutes, the attention is turned towards a basketball-sized ball of dough. One Chao portions, and another Chao kneads... 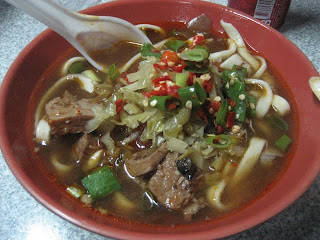 Old Chao's beef noodle soup. Fried chili and onions garnish the top.
Nothing about a cup of hot chocolate can beat this.
Upon arriving at Old Chao's stand, Mr. Chao turns from the steaming vat of beef soup and eyes me. The way his left eyebrow jerked into a sharp, upside-down V was his way of asking for my order. In Mandarin I say, "beef noodle soup... small bowl." Mr. Chao responds with lightning-quick Taiwanese, a tongue that I just don't understand unless my grandmother slows it down for me. "Huh?" Mr. Chao, slightly annoyed that I'm not one to understand the native tongue says in Mandarin, "It's not ready yet. Five minutes. You wanna wait?" I nodded. Even if I hadn't ran to the MRT station, switched from the blue to brown line, and walked in the pouring Taipei rain... it was well worth the wait. 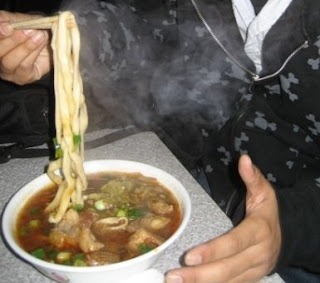 Some serious steam.
On rainy days I'd rather relish in beef noodle soup than hot cocoa.

Five minutes have passed, and without saying a word, Mr. Chao drops a bowl of beef noodle soup on his counter... but in my direction. His left eyebrow formed the same jagged, upside-down V shape. But this time it meant that was noodles were done. I thought I had better catch on with his silent language... might as well... I couldn't speak Taiwanese, and he didn't want to speak Mandarin... I pulled out the change from my right pocket and dropped four 10 NTD coins into his plastic tub of change. 40 New Taiwan Dollars... just over a buck. I shot him a look with my right eyebrow... I was capable of the jagged, upside-down V shape too, but my raised eyebrow meant, "Thanks." 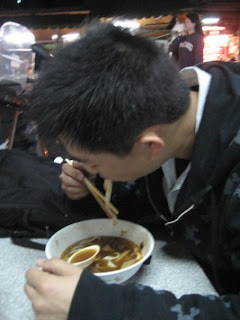 Ambidextrous. My left hand grasps noodles with the chopsticks.
My right hand spoons beef soup while forming a barricade around the bowl.
I wish I could remember the address (does he even have one?) or at least the name of the street, but if you blindfold me and drop me anywhere on the streets of Taipei, I would be able to find my way to Old Man Chao's Noodle Shop as easily as a Golden Retriever is able to locate his favorite bone buried in the ground. Every Taiwanese native, local, or diaspora descendant has a favorite beef noodle soup place. Old Chao's is mine. And it's my rainy day cup of hot chocolate... in Taiwan.