A white, unmarked van pulls into a dark, empty lot at the corner of Duarte Road and Rosemead Blvd. The Tacos La Doña cart is hitched to the back of the van. When the vehicle comes to a complete stop, more vehicles enter the lot, and a line of parked cars is formed. 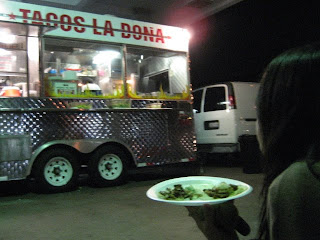 Def. la doña. A title of respect bestowed on elders or employers.
Out of the car file high school students and parents with children. They approach the cart's window and place their orders, "Tres tacos tripas... " It becomes apparent that many of them are locals. They know that La Doña is cash only, tacos are a buck a pop (no tax), and that they serve Coca Cola imported from Mexico... the kind that is made from real sugar cane and not high fructose corn syrup. 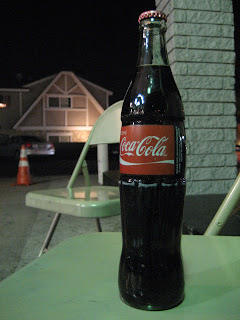 Authentic. The scratches indicate that the bottle has been reused.


Upon picking up their paper plates of pastor, the parents place their children in their laps and squat down on the concrete islands where gas pumps once stood. A few of the folding chairs provided by La Doña have of onion and cilantro on them, remnants of recently eaten tacos. Rather than wiping the chairs down, the parents have decided that it's easier to squat. 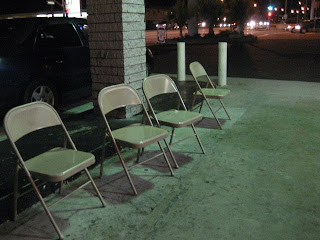 Provide a caption.
I'll buy a round of tacos for the reader who submits a winning caption by Feb. 28.
The teenagers eat standing over the trunks of their Civics and Integras. The rear spoilers provide just the right height for a makeshift table. Another group of locals arrive... they are gray-haired seniors of Asian descent. They arrive by foot, and they are wearing sweats and pajama bottoms. Definitely locals. 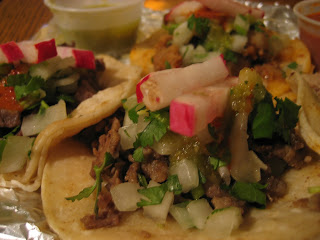 Suave suadero.
The brisket is smooth and comes from the lower chest of the cow.
Students, families, and retirees... what strikes me is not how different these groups are from one another, but that they all seem to have something in common. Although this is complete speculation, my intuition tells me that La Doña's patrons aren't here for the tacos (even though they are quite delicious). They are here to break the monotony of their daily lives and experience a bit of the local community nightlife. 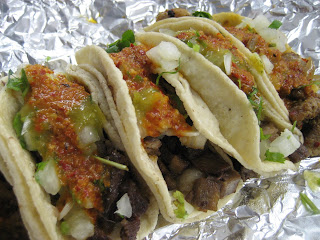 Awesome asada.
I couldn't resist using both salsas on the beef.


The students appear to be high school seniors that have finished their college applications and have contracted full-on senioritis... hanging out at a local late-night eatery foreshadows the forthcoming college nights. The parents bring their young'uns to La Doña to break from their nightly routine of washing dishes, reviewing homework assignments, and tuning in to Leno's lame laughs. The gray-haired grandparents may have been eagerly awaiting their post-dinner meal, which is common in many Asian countries where dinner is not the final meal of the night. (Taco Bell may have been marketing their Fourth Meal to the wrong demographic.) 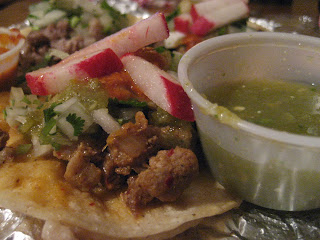 Premium pastor.
Grilled onions have been tossed in.
From the first visit to Tacos La Doña during my late-night taco run last week, I have been absurdly infatuated with the motor-less meals on wheels. Warm tortillas, grilled meat and onions, spicy salsa... asada, al pastor, cabeza, tripa, lengua, suadero... all of them are good. Not clubbing in Hollywood but got a craving for bacon-wrapped hot dogs? They have dirty dogs here too. What more could you ask for? 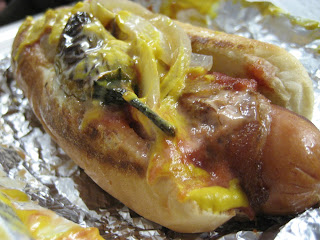 Dirty dog.
It's an absolute mess, but it's absolutely delish.
When I asked if I could take a few pictures, I was answered with silence. Dumbfounded, I took the 'reply' for no, but immediately, I was met with a sharp rap on the window. La doña began flipping the grilled meat. She was met with a blank stare. She rapped on the window again and used her stainless steel spatula to point to the pastor. When it finally registered that the show was for me, I whipped out my Canon and clicked away. 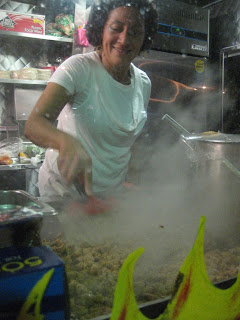 Service with a smile. The world is still good.
The steam from the meat began making its ascent into the air... I swore to myself that I could smell the particles of pastor pleasure. She even cooked with a smile on her face. I couldn't believe it. If that's not genuine service, I don't know what is. 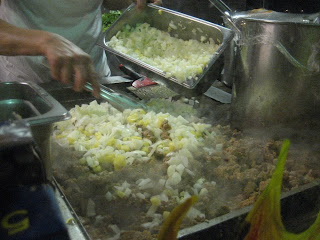 Compliments for the complements.
Grilled meat and grilled onions are an undeniably perfect pair.
I am indebted to Tacos La Doña for providing a late-night alternative to 626's HK-style cafes and fast food drive-thrus. I may have found a new local spot. Granted, the tacos might be larger at other taco trucks, but hey, for a buck a pop, it beats McDonald's dollar menu any day. 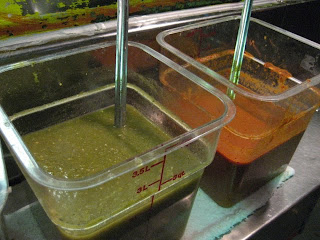 Verde y roja.
If they were political parties, bipartisan gridlock would be a thing of the past.
Hasta luego, mujeres y muchachos... let's get S.O.F.A.T.
ML - 20100216