Two years ago today I was packing... well, stuffing is perhaps the better word. I was stuffing my luggage in preparation for my semester of studying abroad in China. It was 4:00 in the morning, and I hadn't slept the whole night. I had been packing, er... stuffing my luggage since dinner. Since it was 32° Fahrenheit in Shanghai, my aunt insisted (last-minute) that I bring an extra parka and long underwear. Little did we realize that by the end of my spring semester in Shanghai, it would be 32° Celsius. The parka got stuffed in, and a pair of Adidas got tossed out.
Each time an item was put in and another item was tossed out, I would zip the suitcase up and weigh it by carrying it on a bathroom scale. My aunt insisted on this practice so that I wouldn't have to frantically sort through my clothes at the airport (since I've been guilty of it so many times). And because carrying the suitcase hindered my view of the scale's reading, my aunt would shout from somewhere near my toes, "23 kg! Just 3 more kilos away! 好, 好... 快了! Good, good... almost!" Unzip. Open. What do I take out now...?
5:30 a.m. "Time to go!" I was too delirious from sleep deprivation to acknowledge what my uncle had said. Before I knew it I was standing in front of security checkpoint. With a final hug for my aunt and, "I'll call as soon as I get a cell phone," I walked through the security gates. Five seconds later I realized how strange that statement was... "I'll call as soon as I get a cell phone..." Holy shit. No cell phone. I felt so... naked. 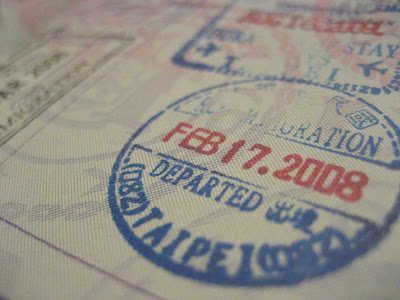 Pound.
The stamp from R.O.C. Immigration literally marked the beginning of my journey.


The thought of going to China all by myself really scared me. Even though I was excited to meet everyone on the program... landing to a new place without a companion is a bit unnerving. Still suffering from sleep deprivation, my thoughts became mere images, lost in a sea of mental hyperventilation. Let's call it hyper-mentilation... 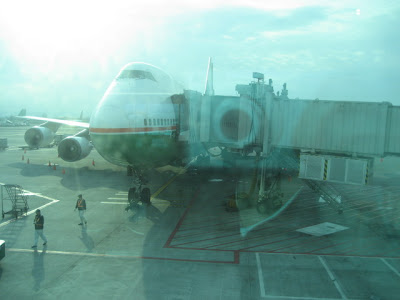 Preparing for departure.
At Taiwan Taoyuan Airport waiting to board the first segment (TPE-HKG) to Shanghai.


8:00 a.m. BR 851 pulled back from the gate.
I usually take pictures of the in-flight meals, but I must have knocked out. I remember having major difficulties pulling the tray table out. "Here," the kind businessman next to me said. He unlatched the table and unfolded it in one swift motion. (I swear I've been on planes before.)
10:00 a.m. The jolt from the wheels hitting the runway woke me. I fell back asleep while the Boeing 747 taxied to the gate. The next thing I remember was slipping in and out of consciousness at the airport in Hong Kong. 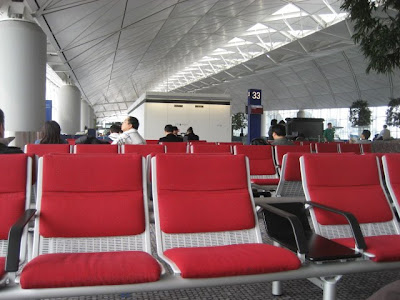 
11:30 a.m. Blink. Final boarding. Sweat of panic dripped down my face. Where were my bags?! I jumped up... and nearly fell over. I had nudged my carry-on between my feet as a precautionary measure. Against what... I'm not quite sure (two years later). People probably thought I was crazy. "Paranoid Taiwanese..." 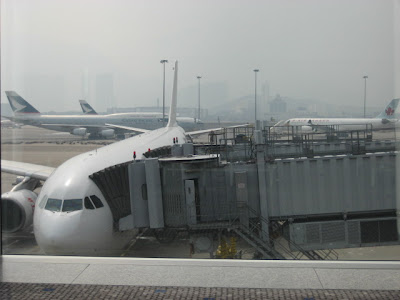 Hazy.
One word described both the weather and my state of consciousness.
Noon. Struggling to stay awake, I rest my head against the curvature of the plane. KA 892 was on its way to Shanghai. I missed another opportunity to snap a shot of Dragon Air's lunch of grilled beef with strawberry glaze over rice. (Is this Chinese food?)

Just after 2:00 p.m. The first thought as I peered out the window for my first glimpse of Shanghai was... why are all the roofs bright blue? Seriously, has anyone else noticed all the bright blue rooftops on approach to Shanghai? Please leave me a comment and tell me why all the roofs in Pudong are bright blue.

Two thoughts popped into my head after landing...

1. The marshaller is wearing a navy blue, body-length, wool coat with a gold Communist star. Shit. I'm in China.

2. The marshaller is wearing a navy blue, body-length, wool coat with earmuffs and a cap. Shit. It must be cold outside.

The cabin door opened, and I immediately felt the bite of the cold winter air. I anticipated the worst while walking through Pudong International Airport. Filing out of the jetway, I noticed more officials wearing navy blue, body-length, wool coats... and stone-cold faces. Shit. I was in China.

The immigration officer flipped to my visa. "You're here to study?" I nodded my head. He smiled. Pound. A bright red oval now adorned page 13 of my passport. His smile calmed the butterflies in my stomach... but then I peered down the escalator at Baggage Claim at Pudong Airport. Pure chaos. 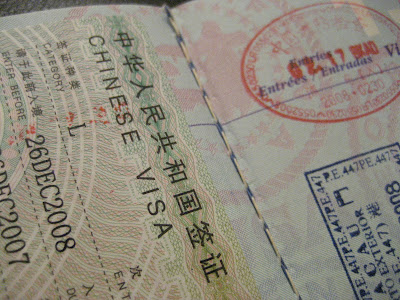 Pound.
Shit. I was in China.
It was like looking at Murphy's Law... live. Bags flew onto carousels the same way dust flies out of a vacuum cleaner in reverse mode. Wives yelled at their husbands to grab luggage carts. I was shoved by some who were charging for their bags. I nudged back and then inched as close to the carousel's edge as I could. "Like Spanish bulls..." I thought. LAX is crazy, but this was a whole other ballgame. I buttoned up my coat and crossed my arms over my chest. Defense.  Although I put no thought into it at the time, this simple defensive action of crossing my arms across my chest was a blatant foreshadowing of the next half a year in China.
3:00 p.m. It had taken me almost a whole day to get from Taipei to Shanghai. I was completely drained, but... shit. I made it. I was in China.