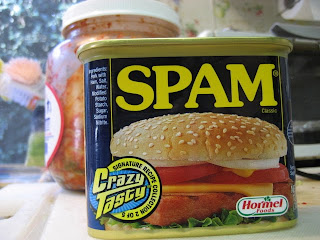 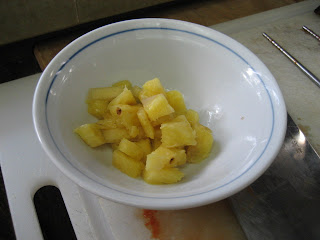 2. pineapple - fresh or canned (doesn't matter) but must be drained 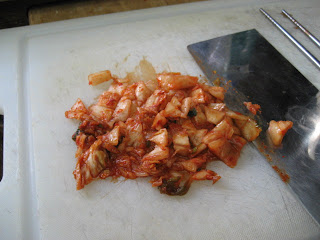 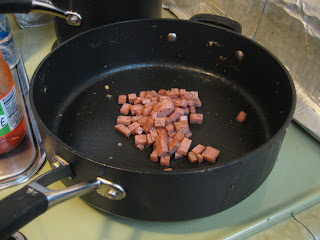 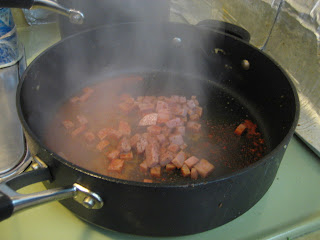 Step 2. Add the kimchi and kimchi juice, and let it reduce with the Spam. 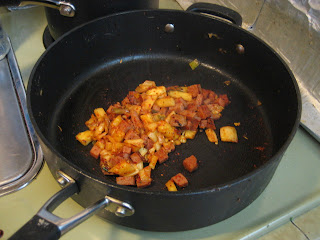 Step 3. Toss the pineapple in with the Spam.
S&P (salt and pepper) the S&P (Spam and pineapple). 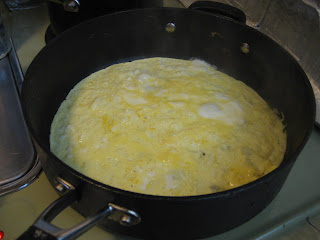 Step 4. Take out the omelette's organs.
Pour the eggs over the skillet and let it firm up. 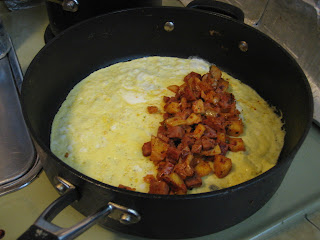 Step 5. Put the omelette's organs back in. Attempt to fold/roll the omelette.
It gets interesting here, hahaha.
After an utterly failed attempt at folding the omelette, I came to the sinking realization that Spam+pineapple+kimchi could have made a delicious contemporary pizza a la CPK. *smacks forehead* Feeling disappointed in myself for not thinking about pizza as a possibility, I sank into my overstuffed sofa seat hoping that my kimchi omelette would taste decent at the very least. 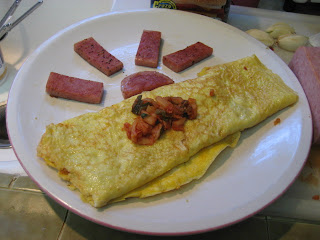 Spam+pineapple+kimchi omelette. Good morning, America!
I covered the rip in the omelette with kimchi. You'd never be able to tell otherwise. :P
As I took my first bite, something hit me (I think it's called shock). Savory Spam... sweet pineapple... and spicy (and a bit crunchy) kimchi... all wrapped in a little bit of neutral (the egg)... delicious! But just to make sure my taste buds weren't screwing with me, for my second bite, I raced into the kitchen for a bottle of Tabasco. A dash here, a dash there... bite no. 2. Nom, nom, nom. Mmmm...! The savory+sweet+spicy combo was really working for me. More munching ensued... and a few minutes later... 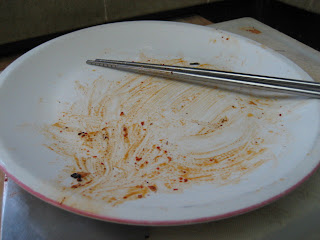 Demolished. Tabasco and kimchi blood remain.
Chopsticks are more convenient than any other utensil.
I think I've just created an Asian omelette! But another realization hits. I don't think I'm the first one to have created an Asian omelette. There is a Taiwanese-style omelette that is made with pickled daikon radish (Chinese-written: 菜浦蛋; Taiwanese-spoken: tsai bho nngh). I've had this Taiwanese radish omelette plenty of times before. So I went back into the kitchen, excited to try a Taiwanese-inspired, Korean-flavored omelette (泡菜浦蛋). Instead of Taiwanese picked radish, I used Korean pickled radish kimchi. The kimchi isn't as salty or as crunchy as the pickled daikon, but it was well worth a shot. 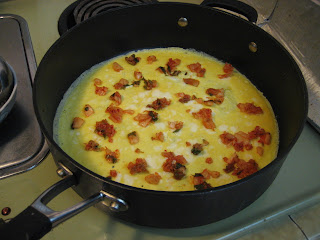 Taiwanese-inspired, Korean-flavored. Radish kimchi omelette.
I may try scrambling the eggs with the radish kimchi inside next time.
Just as I had thought... not as salty and not as crunchy, but not bad at all. In comparison to the first omelette, the second one is physically flatter and flatter in taste as well. There isn't as much of a "Hmmm... what exactly is this that I'm tasting...?" To improve, maybe I would add another pinch of salt in the egg and then eat it with a side of kimchi (either cabbage or radish). 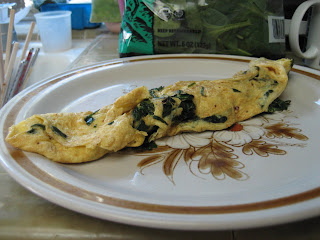 Surprise! A simple spinach omelette.
I was in a mood to scramble eggs.

Gah! I've had way, way too many eggs this morning. Kimchi pizza next time? Until then, let's all get S.O.F.A.T.