On December 12 of last year (12/12/12), jetBlue held a flash sale for short haul flights to help open the newly remodeled terminal at Long Beach Airport.  Flights from LGB to LAS, SFO, OAK, SAC, PDX, and SEA were only $12 each way with taxes included.  It was cheap enough (less than $24 total for a RT with taxes) to fly to Vegas for dinner and return in time for work the next morning.  Looks like quite a few spontaneous jetsetters had the same idea because the flights to Portland and Seattle sold out instantly... and that is how I ended up in Vegas in the middle of the week. 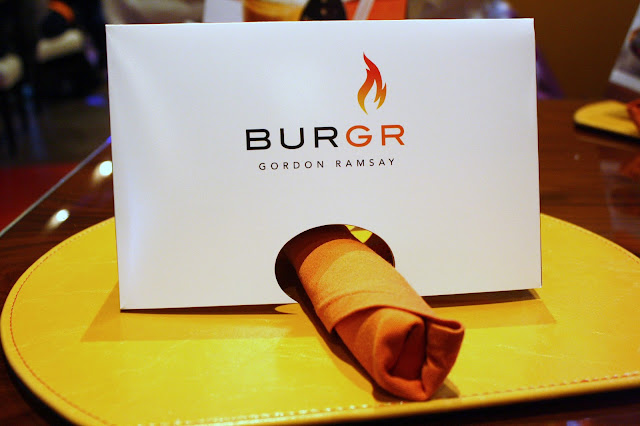 I met up with Vegas local Amber-Rose Kawewehi, writer of the blog Cheer Up With Food to try out the new Gordon Ramsay BurGR at Planet Hollywood.  Chef Ramsay's new burger joint strives to make the classic American burger and shake combination into a classed up version of comfort food in a casual environment.  Amber-Rose (yes, you can call her Amber for short) brought a friend with her, and I brought my roommate.  The four of us ordered just about everything on the menu. 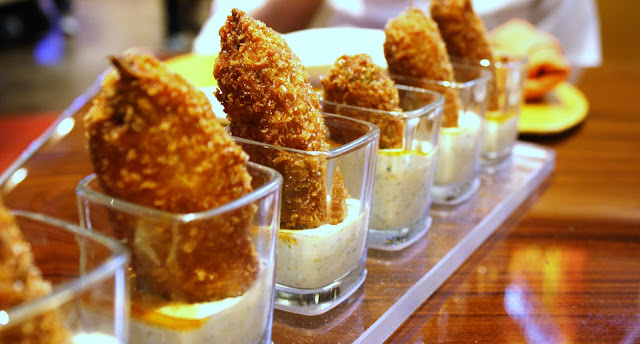 We started off with the Roasted Jalapeño Poppers.  The outside was breaded with panko, and the interior was stuffed with applewood smoked bacon and English cheddar.  They were dunked into a shot glass of English cheddar ranch with chili oil.  In case you can't handle spicy, you're in luck because out of the half dozen poppers, five of them have had their seeds removed.  One of them, described on the menu as the "fiery surprise," still contained the vein of seeds within.  The odds are that you won't be the one to end up with the fiery surprise, but if you didn't have the best of luck with the roulette wheel on the casino floor, I wouldn't take my chances on this one.  After all, this is Vegas. 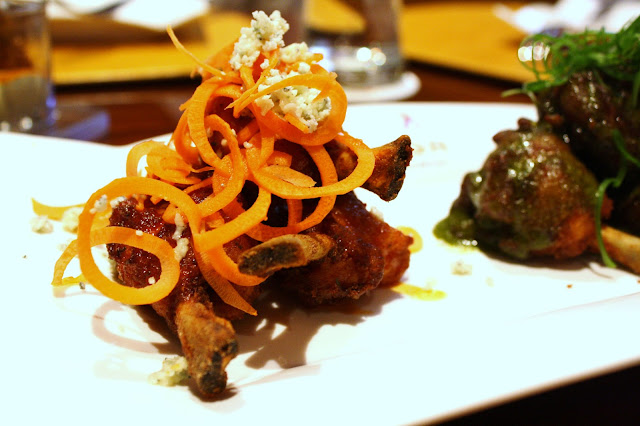 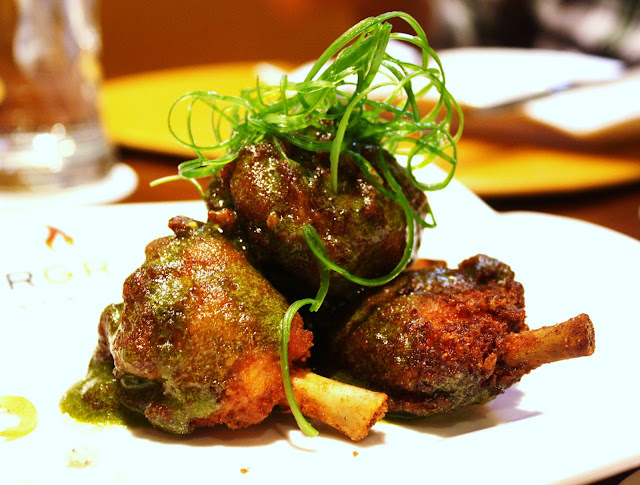 Next up we ordered a platter of the Fury Chicken Wings, which were a combination of four tangy hellfire bleu cheese wings and four honey wasabi wings.  The hellfire wings definitely had a bit of heat... maybe even more so than the honey wasabi wings.  The second set of wings had a obvious wasabi bite, but the restaurant was careful not to have the volatile condiment overpower the flavor of the wings.  The Deschutes Chainbreaker White IPA that I was drinking tasted even better with the spicy fried food.  By the way, we ordered our drinks off a portable iPad that our server whisked to us each time we wanted to quench our thirst.  Very cool. 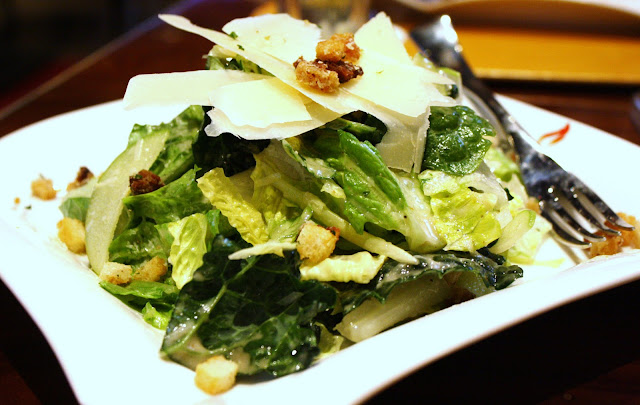 There were only two salads on the menu, and thankfully neither of them were the typical house or classic Caesar salad.  Amber made a great call by ordering the Kale Granny-Apple Caesar Salad.  I love that the salad section actually had a vegetable that was substantial in nutrients without coming across as way too healthy.  The kale was a smart move on Chef Ramsay's part.  And even smarter was the addition of the crispy and slightly tart Granny Smith apple slices.  The apples added a light and fresh touch to a salad that becomes quite heavy with its eponymous dressing. 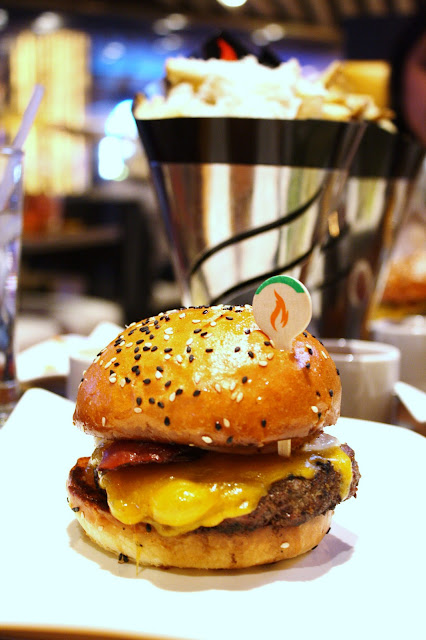 Although there were other items on the menu we wanted to try such as the Honey-Pig Bao Buns and the Devil Dawgs, we stuck to the classic burgers and fries combo.  Our highly attentive server Charlie expertly explained that the meat used in the burgers were 100% beef, a blend of beef brisket, chuck, and short rib.  They are all grilled with an English Devonshire butter, but no other seasonings or sauces were added.  Two types of wood were used for creating the fire under the grill... applewood, which created a smoky flavor, and alderwood, which created a sweeter flavor.  After the detailed description, we knew that ordering burgers was the way to go. 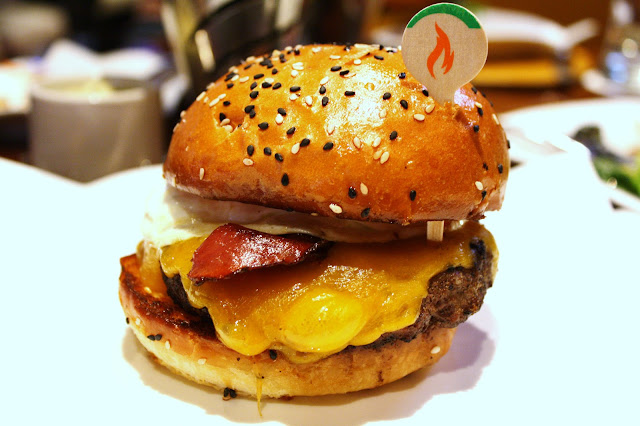 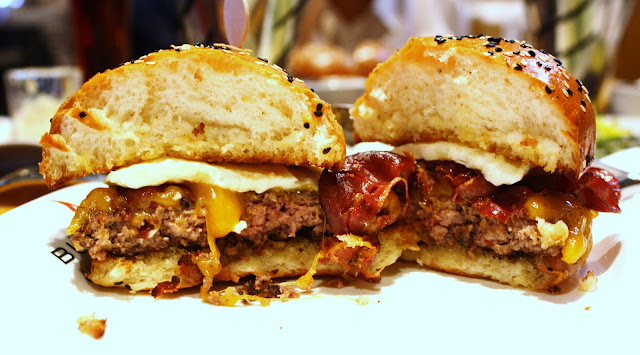 I ordered the Farm Burger from under the Stacked section of the menu.  It came with a sizable portion of duck breast bacon and a runny fried egg, which ended up dripping into the sharp English cheddar cheese.  The duck bacon was more tender, more crispy, and even more decadent than the typical breakfast pork bacon.  The bun was more than just buttery.  Biting into the crispy yet pillowy bun was like biting into a soft, buttery crouton.  Absolutely delicious. 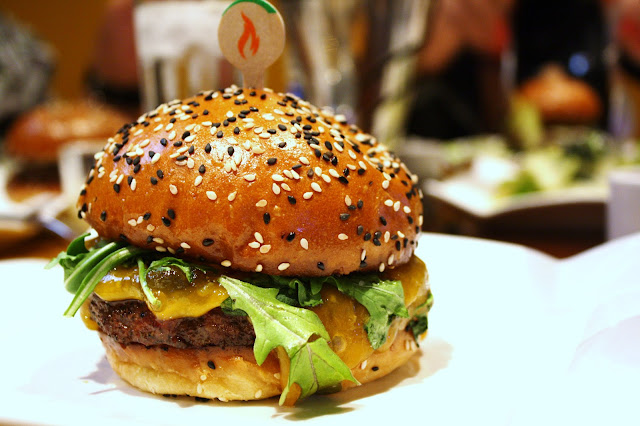 Amber ordered the Britannia Burger, which was made with mango chutney, sharp English cheddar and a layer of arugula.  I wasn't quite sure what was so Britannia about this burger... not that it needed a Union Jack to scream Britain or anything.  It could have been the mango chutney, which would have been a nod to the heavy influence of Indian cuisine on English cooking.  The mango chutney was a nice touch, especially since its sweetness contrasted the peppery arugula leaves.  But really, it was simply creative.  When was the last time you had mango in your burger? 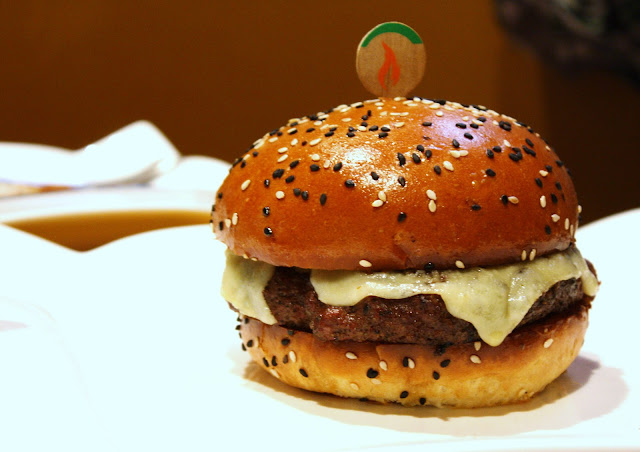 Amber's friend Byron ordered the Uber Cheese Burger.  Just from its profile we could tell that it was loaded with cheese.  This cheeseburger had a trifecta of fontina, reclette and goat cheese all melted between the patty and the bun.  It oozed out and covered the circumference of the patty to give it enough more moisture and juiciness. 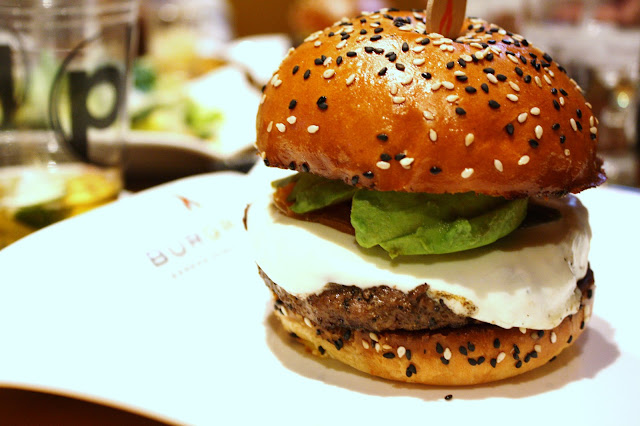 We couldn't leave without ordering the Hell's Kitchen Burger.  It had a good amount of asadero cheese melted over the patty along with roasted jalapeño peppers, oven roasted tomato, and freshly sliced avocado.  Needless to say, this burger was stacked.  I appreciated the oven roasted tomato, and I liked the creaminess of the Mexican asadero cheese... but what really made this burger good was the spiciness from the peppers.  Angela, by the way, was the lucky one that picked the popper with the seeds still inside it.  Looks like heat followed her in burger form this time. 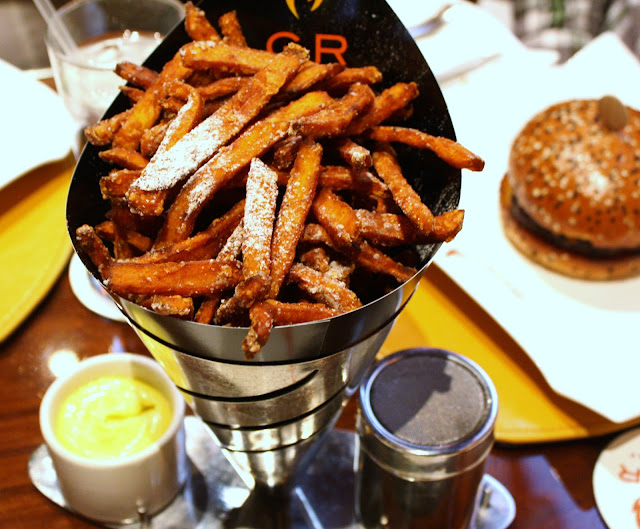 The four of us split an order of the Just Fries, an order of the Truffle Parmesan Fries and an order of the Sweet Potato Fries.  The truffle fries looked as if it were covered with Parmesan snow.  The truffle salt and truffle aioli made the cheesy fries extra salty and finger licking good.  The sweet potato fries were surprising in that the two accompaniments provided completely different tastes.  One was a vanilla powdered sugar, which made the naturally sweet fries even more sweet.  The other was a honey jalapeño mayo, which was both sweet and spicy at the same time.  The orders of fries were so big that the four of us couldn't finish, so we took them home for the next day to eat.  Usually that isn't a very smart idea, especially for fried foods, but the sweet potato fries held up well and were still tasty the following day. 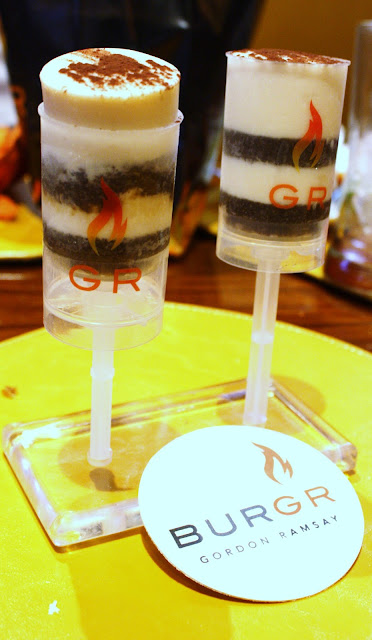 We could barely finish the big burgers and phenomenal fries, so we chose to pass up on the milkshakes.  The milkshakes, though, looked absolutely intense.  Each of them were served with a pudding (choices included caramel, coconut, butterscot, banana, and chocolate hazlenut) and topped off with a cookie (choices included toffee, chocolate, snicker-doodle, gingersnap, and praline).  What we could eat though were the Sticky Toffee Pudding Push Up Pops.  The interactive dessert was made with layers of sticky toffee pudding, salted peanut ice cream and dusted with cocoa powder.  It brought a sense of nostalgia to those of us who grew up eating Push-Up ice cream pops.  These things were not easy to eat, but that may have been the point... to create the sticky mess that we made as children perhaps brought the nostalgia closer to home. 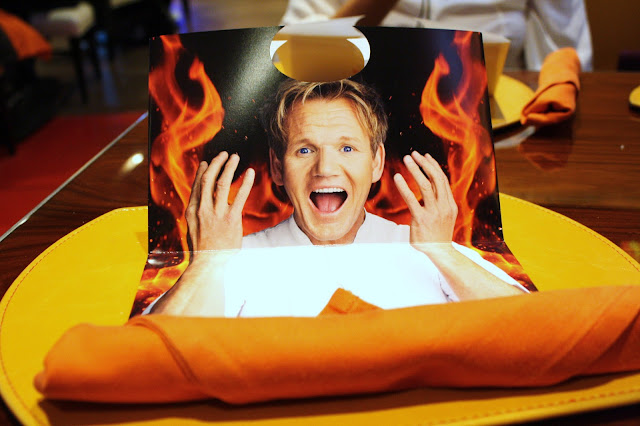 But mess or no mess, Gordon Ramsay made some great burgers.  They may not have been the best burgers I have ever eaten (what burger can top In-N-Out, really?), but the burgers were definitely worthy of at least one visit... at least.  Thank you to all the local Vegas bloggers that I was in contact with.  But a huge thank you goes out to Amber-Rose for meeting me at PH.  Cheers to more blog collaborations this year, and to meeting many more food bloggers out there.  Until next time, let's all get S.O.F.A.T.

Cheer up with Amber-Rose's post on Gordon Ramsay BurGR here.