From San Diego Restaurant Week, we move back up to the City of Angels for our own restaurant showcase called dineLA.  At Ken's suggestion we selected Stefan's at LA Farm for its six course dineLA menu.  Chef Stefan Richter from the fifth season of Top Chef prepared the only six course menu.  That made for some easy decision making.

At the end of a long Monday in the office, the only thing I wanted to do was sit at the bar and have a drink.  So sit at the bar we did... except that was all we did because the bartender did not notice my desperate plea for alcohol.  No matter.  Chef Richter saw my frustration and jumped behind the counter to pour a glass of whiskey for me.  He recommended a super smokey Laphroaig 10 year Scotch whiskey.  Chef dropped two ice cubes in the whiskey glass and suggested to take one sip right at that moment and then again only after the ice melted.  It was seriously smokey... like a chimney during Christmas kind of smokey. 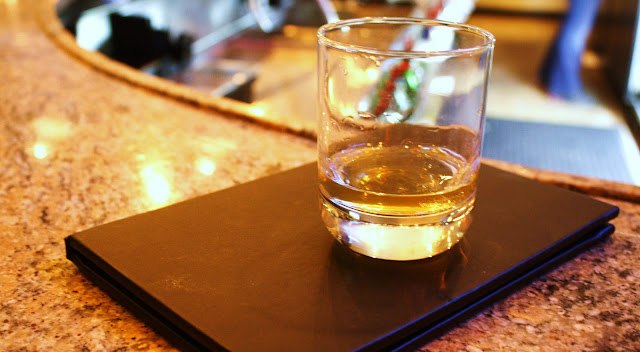 The strain of corporate America eased up, and the tension of another manic Monday melted away.  Here is our six course meal. 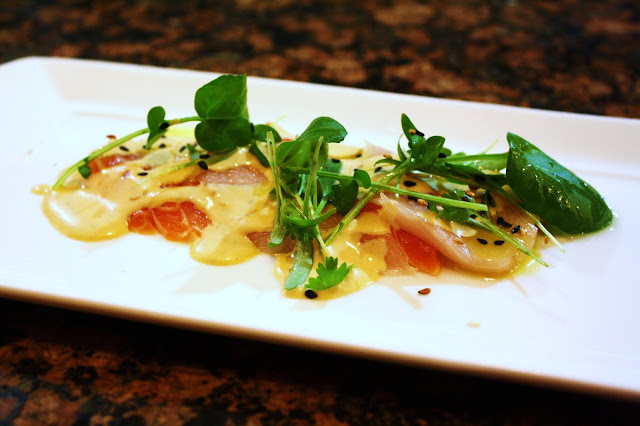 Michael's starter course: Cali crudo with thinly sliced hamachi and lime yuzu vinaigrette.  I always enjoy starting a meal off with raw or fresh ingredients.  It is a smart way to ease the palette into multiple courses with lighter flavors and relatively cooler temperatures. 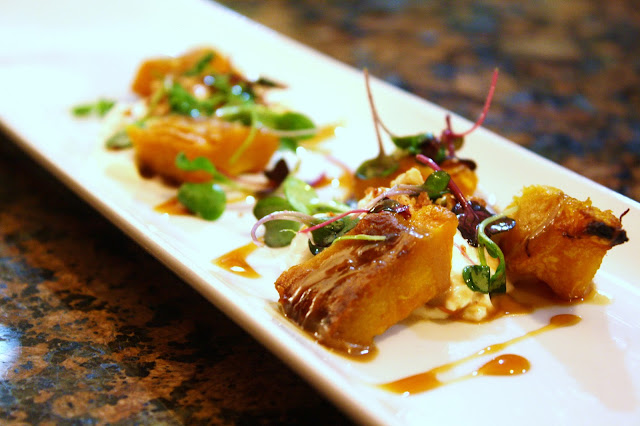 Ken's starter course: Roasted acorn squash salad with burrata and walnuts.  Continuing with raw ingredients we were served more fresh farm fare.  The burrata cheese had a bit of acidity that worked to bring out the earthy sweetness of the squash.

Michael's pasta course: Pumpkin raviolo with brown butter and pecorino.  The brown butter combined with a fresh pasta made for a classic flavor.  I was glad that Chef did not use butternut squash in the ravioli... it is used entirely too often. 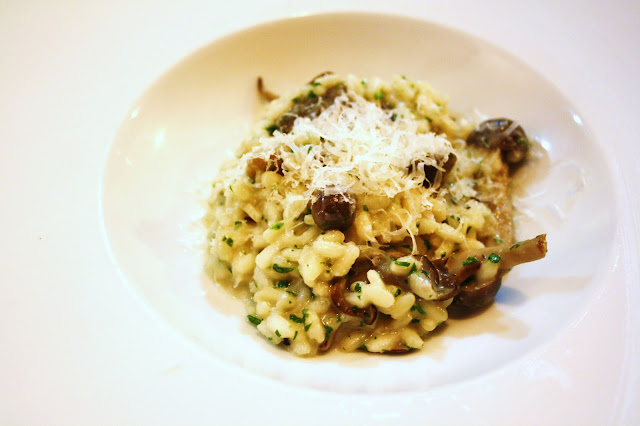 Ken's pasta course: Mushroom risotto with hen of the woods fungus and bleu cheese.  It was creamy and al dente, savory and earthy.  Mushrooms, as opposed to meats, always provide suitable flavor without making risotto or pasta dishes too greasy. 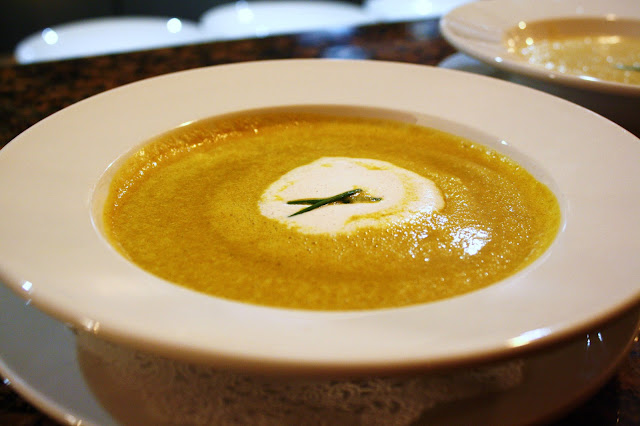 Michael's soup course: Acorn squash soup.  I was so surprised by the flavors in the soup.  It was so intense because there was a sweetness from the squash, but I also tasted hints of cinnamon and nutmeg in it.  It was reminiscent of Thanksgiving pumpkin pie.  I love that the creme fraiche was there to balance out the intensity of the flavors. 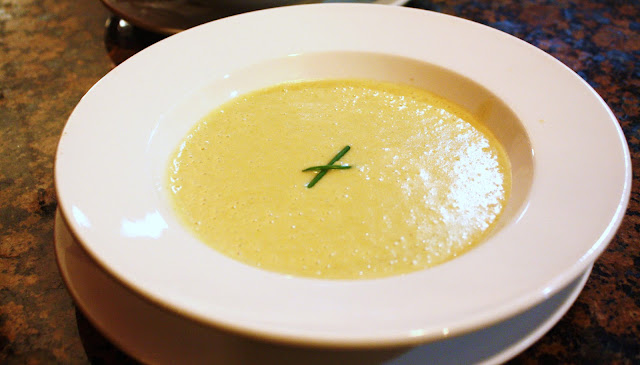 Ken's soup course: Smoked leek & potato soup.  The soup was not bad, but it tasted much milder after having spoonfuls of the intense acorn squash soup first.  Ken started with this one, so he was able to taste the leek and potato more. 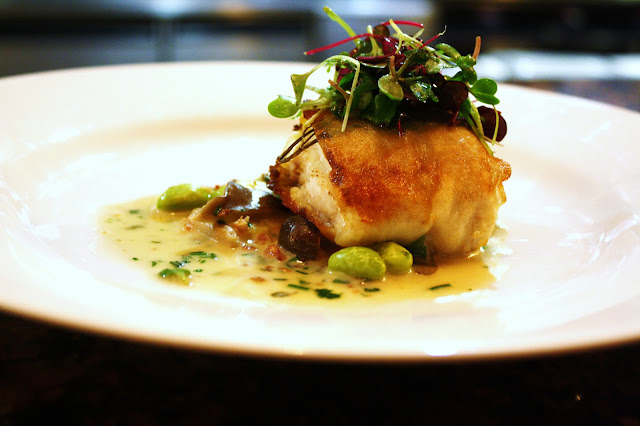 Michael's fish course: West Coast halibut cooked with brik dough, zatar spice, edamame, chanterelle & shimeiji.  There was a good sear on the exterior, and the fish itself was soft and almost fluffy. 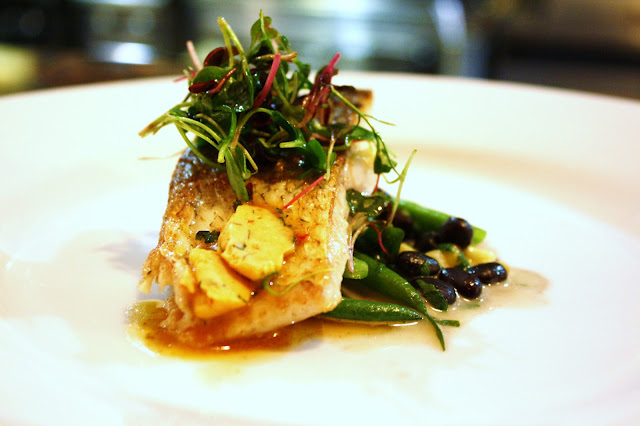 Ken's fish course: Crispy white fish with chipotle butter, black beans, cilantro, corn, green beans.  I liked the abundance of vegetables because it prevented the dish from feeling heavy from the butter.  The crisp fish skin was a plus. 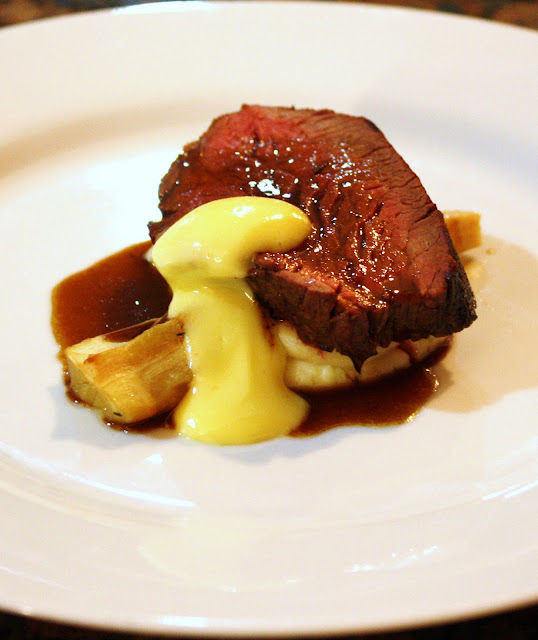 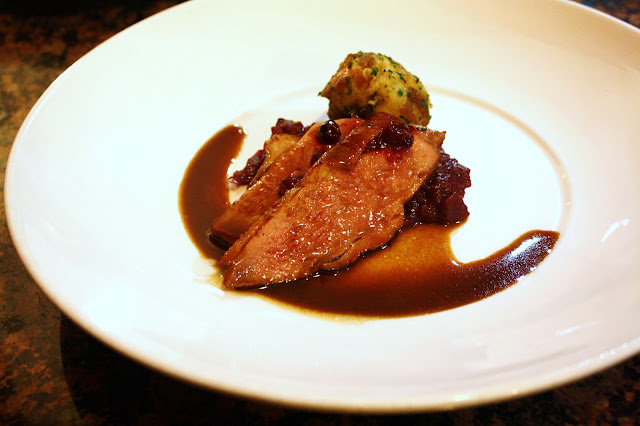 Ken's meat course: Duck breast.  The braised red cabbage and lingonberry sauce had a slight sourness that contrasted the savory flavor of the duck breast.  The pretzel galette with the herbs and spices tasted like a bread stuffing that usually goes with turkey during the holidays.  This dish was a creative way to pair poultry and starch.  The duck was so tender.  So good. 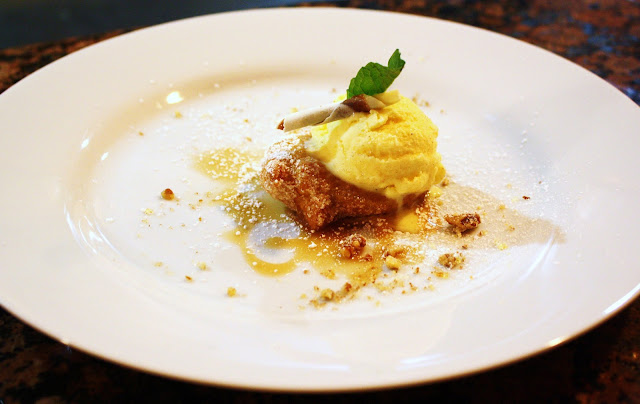 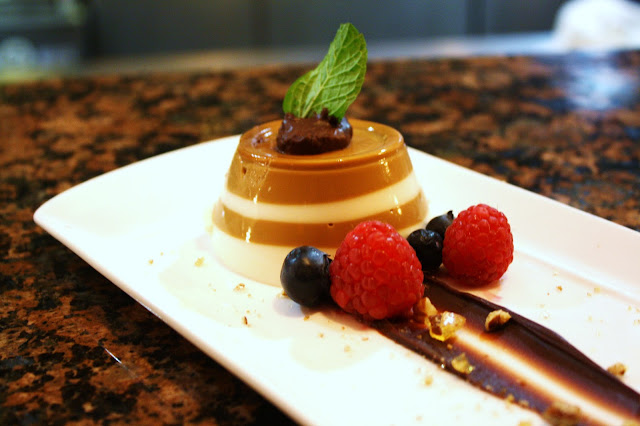 Ken's dessert course: Coffee & vanilla panna cotta.  Panna cotta is a favorite of both mine and Ken's.  I have only ever had a uniform flavor of panna cotta, so to see the swirl of coffee and vanilla together sparked more than just curiosity.  I preferred some sort of whipped cream to tie the final course together, but it was good nonetheless.

Ken and I thoroughly enjoyed our experience at Stefan's, especially because Chef made a full fledged effort to introduce himself and immerse in conversation.  We also appreciated that Chef and his staff complied with my troublesome request to walk into the kitchen after each dish was prepared to take photographs.  Thank you very much Chef Richter for the hospitable welcome and delicious meal.  And we will definitely take you up on the chance to have a meal in the kitchen while you run your "shit show."  I can't wait.

The event celebrating Chef Stefan's 15th anniversary in America is upcoming and will feature a three course preset menu for 15 per person.  Until then, let's all get S.O.F.A.T.