San Diego Restaurant Week, an increasingly popular showcase of the best restaurant menus in the Whale's Vagina, came around once again this past January.  The week long event has been so frequented by both locals and tourists that it now happens twice a year.  The last time I dined at a SDRW restaurant, I was a recent Triton graduate.  Needless to say, it has been quite a while.  It was due time for a visit. 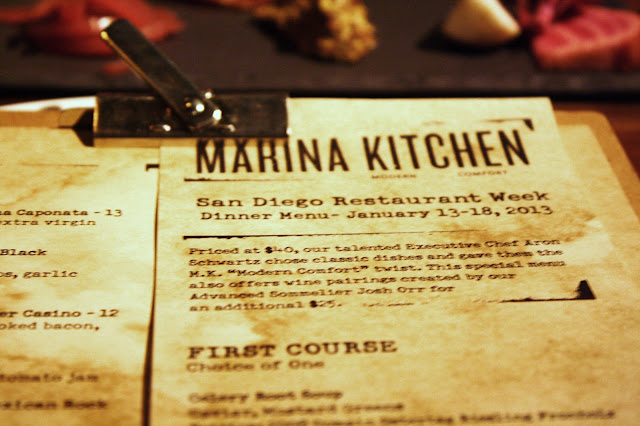 Fellow Triton alum Angela and I decided to try out the menu at Marina Kitchen, which is located inside  the San Diego Marriott Marquis & Marina right by the water.  Marina Kitchen stood out the most because its menu was one of the few that did not feature roasted beets or miso marinated fish, both of which seemed to be on every other SDRW menu.  For just 40 per person, we could piece together our own three course dinner.  And for an additional 25, the sommelier put together wine pairings to complement each course.  This is what we ordered. 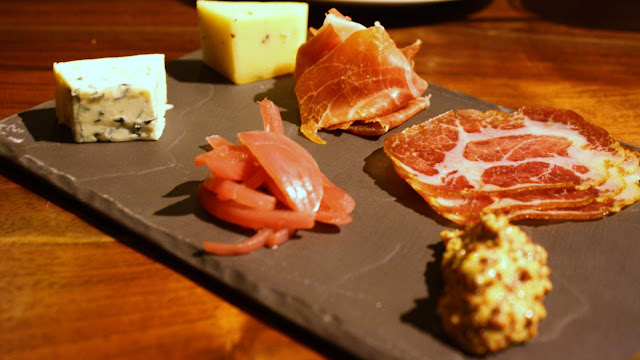 Pre-course: Charcuterie.  Bresaola, coppa la quercia, la quercia speck, shaft's bleu, truffle gouda.
This was not on the Restaurant Week dinner menu, but Angela and I have been looking for a meat and cheese platter that bests the charctuerie from Bow & Truss that we had last fall.  Of the meats and cheeses available, the clear standout was the truffle gouda.  It was so smooth, creamy, and buttery that we wanted to take some home.  No joke. 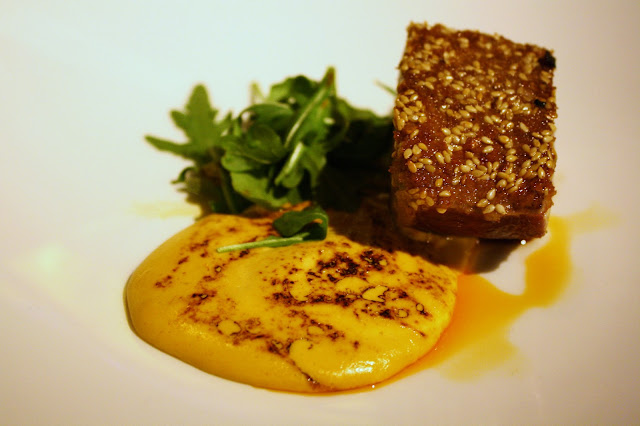 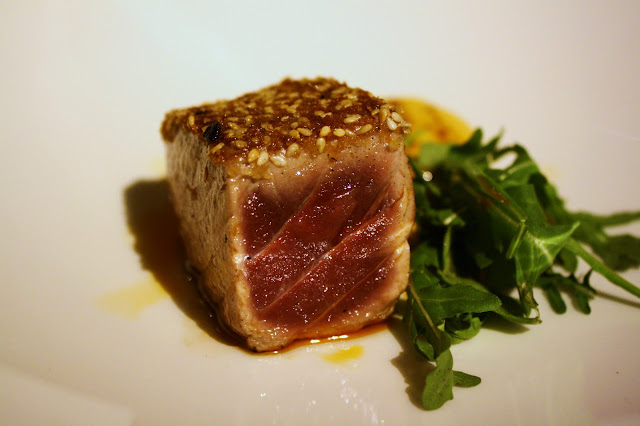 The crust was crisp.  The tuna was tender.  And the uni sauce was rich, creamy, and delicious.  I was glad that there was such a disproportionately large pool of uni sauce on the plate because it was just begging to be lathered up. 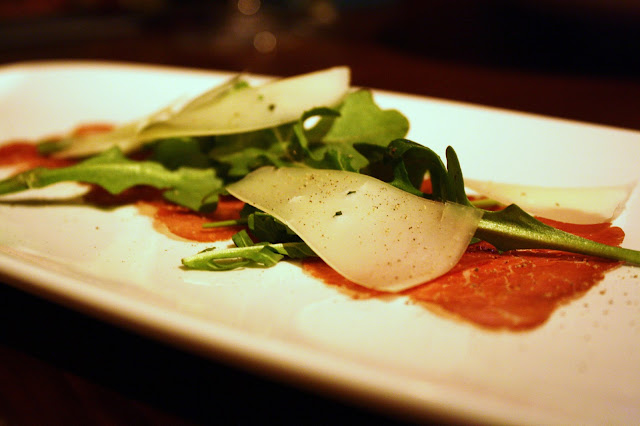 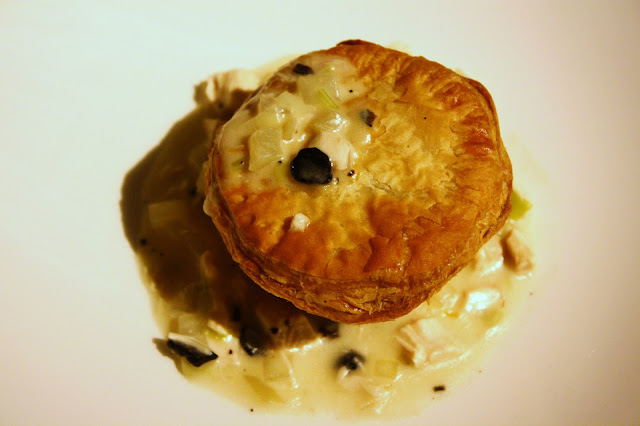 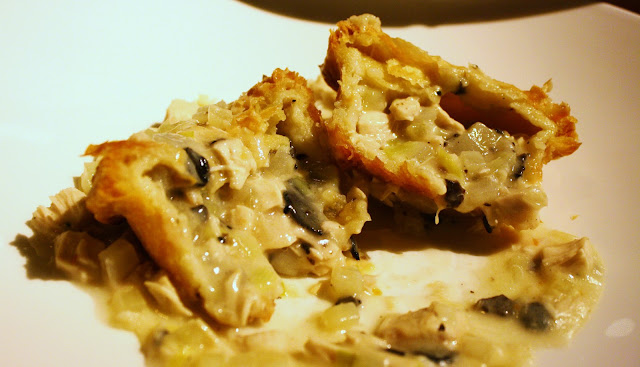 I have loved pot pies since childhood, albeit it was usually the Marie Callender's pot pie that I loved until I came across the handmade pies from The Pie Hole, but I have cherished the compact little baked comfort food for quite some time.  Seeing that Jidori chicken was being used only heightened my curiosity for what was inside the pie's crust.  The black truffle was not as apparent in flavor, so perhaps a drizzle of warm truffle oil would have enhanced the taste.  But I still really like the fresh leeks and earthy potatoes in the pot pie.  The chef did a superb job at conveying a warm sense of comfort with the pie. 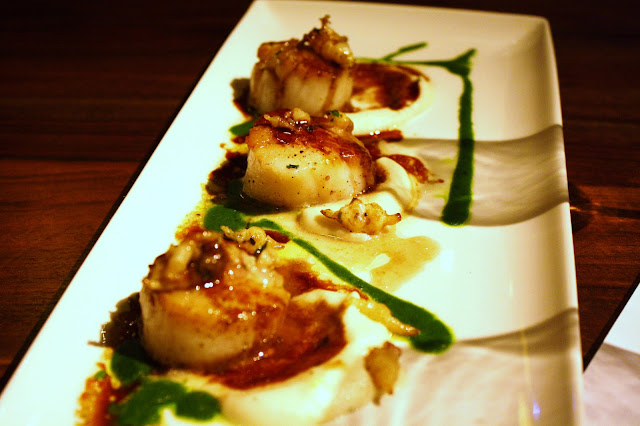 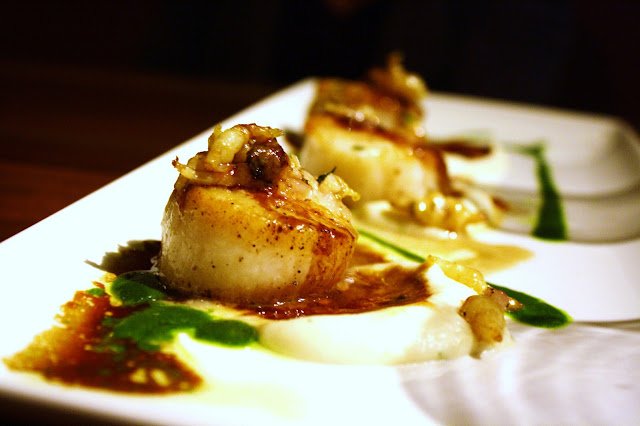 When we were eating this I had no idea what nettles and crosnes were or what the difference was between a Jerusalem artichoke and the kind that is usually in my spinach dip.  But whatever the chef used to make the sauce and to top off the scallops was delicious.  Nettles, so I later found out, are those little screw like twists that somewhat resemble a mutilated escargot.  The scallops were cooked perfectly too... seared but still rare in the center.  It was an elaborate dish with a beautiful presentation... and it ended up being one of our favorite dishes of the meal. 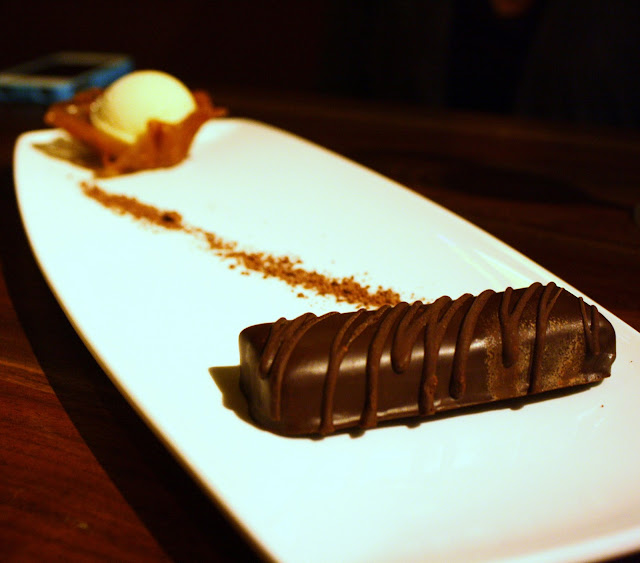 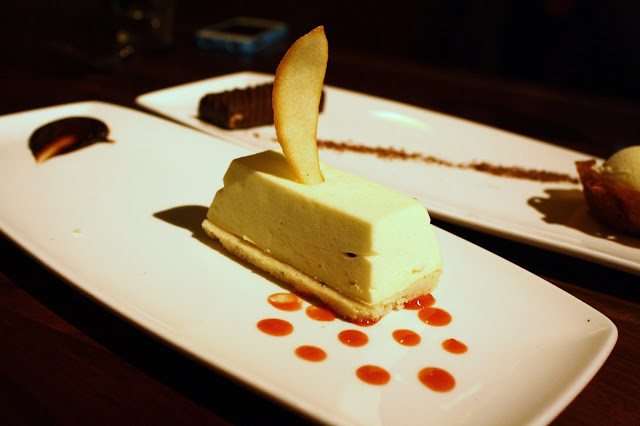 We liked the white chocolate ice cream in the flower petal shaped cookie shell, and we liked the drops of blood orange too.  The carpaccio was not bad, but it would have been better if there was more meat to shaved cheese ratio.  At the end of the meal we still wanted to take the truffle gouda home.  It was that good.  The seared scallops and ahi tuna with uni sauce were definitely the highlights of the meal.

The next San Diego Restaurant Week will begin September 15 and will feature 180 restaurants.  Without a doubt I will head back down to Daygo to try out some more restaurants.  And I know food fanatic Angela will too.  Until then, let's all get S.O.F.A.T.