The Shin Yeh restaurants (欣葉) are known for preparing local fare in upscale settings.  Many of the restaurants sit on upper level floors of buildings that overlook Taipei's main thoroughfares.  Some are even set in lounge like atmosphere with dim lighting, trendy music, and novel cocktails.  This is a stark contrast to other traditional Taiwanese restaurants like Little Lin's Seafood and Sit Fun, where the fresh ingredients are laid out by the entrance in refrigerators or over ice.  According to its history, the owner of the original Shin Yeh knew that Taiwanese fare was a simple food and dedicated herself to developing it into a gourmet cuisine that could be served in banquet settings.  The food here is still whipped up in that distinct Taiwanese style of fresh ingredients and simple preparation.  And of course, the main ingredient in the dish is given the spotlight as the essential star of the show.

My family and I dined at shinyeh' table, a sister restaurant of the original Shin Yeh that targets a younger crowed.  Shinyeh' table (蔥花) occasionally names their dishes in creative ways, utilizing puns and analogies and other tongue-in-cheek methods of capturing the guests' attention.  Not all the dishes have amusing names though.  In fact, most of them are pretty standard, but the ones that do bear amusing names really do stir up a chuckle here and there. 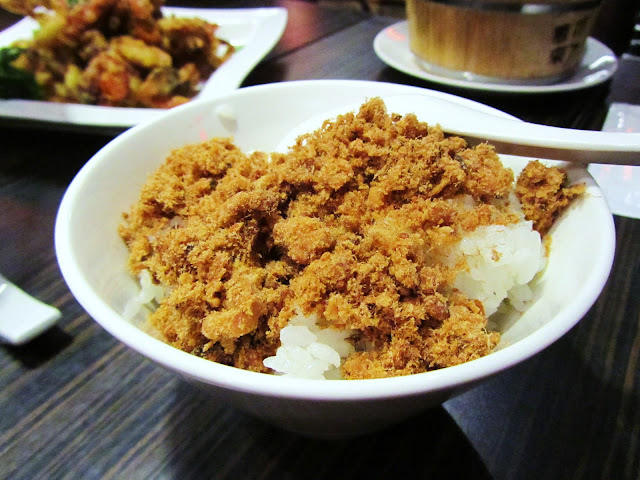 Pork song rice (猴囝仔拌飯)
Pork song (肉鬆), also known as pork floss in some bakeries, is a staple in every Taiwanese household.  It's shredded, dried pork that acts almost as a condiment in items such as rice porridge, sandwiches, and even hot soy milk for breakfast.  The texture has been described to be similar to cotton candy, something that melts in your mouth but still provides a slight crunch on first bite.  It's a great addition to basic, steamed, white rice.  The crunch of the pork song is initially a contrast to the steamed rice, but it eventually blends in with the fluff of the rice as easily as the famous little chocolates melt in your mouth. 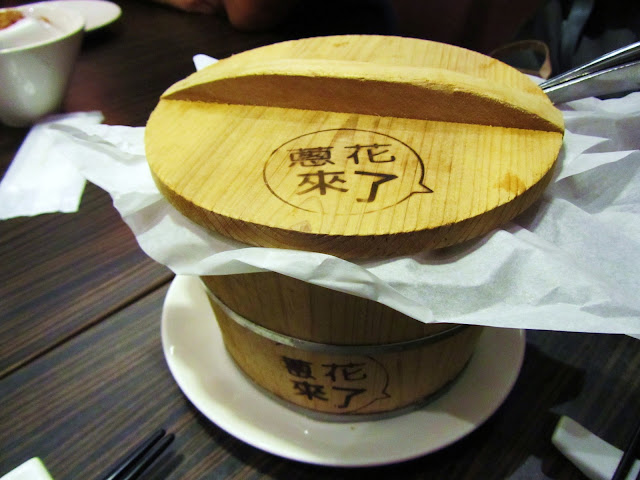 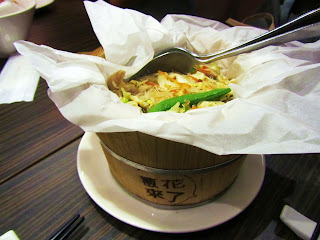 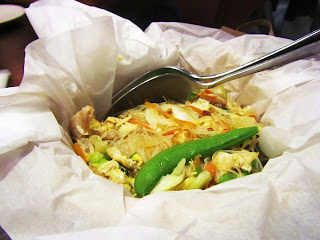 Wok seared rice noodles (蔥花米粉炒)
Although a rice noodle dish may seem relatively simple, there is a lengthy preparation that occurs prior to the final step of stir-frying.  Vegetables such as cabbage, carrots, celery, mushrooms and snap peas need to be cleaned and chopped... pork or chicken should be sliced into strips, and even eggs have to be scrambled.  Most of the preparation, however, is focused on the rice noodles.  The best rice noodles are said to originate in a oceanside city called Hsinchu (新竹), about one to two hours outside of Taipei.  The makers of rice noodles there hang the strands of noodles out to dry with the natural sunshine and ocean breeze of Hsinchu in the same way that laundry is hung out to dry in the yard.  It is this process that gets each rice noodle dried into individual threads, and it is that separation of the noodle that makes the best stir-fry. 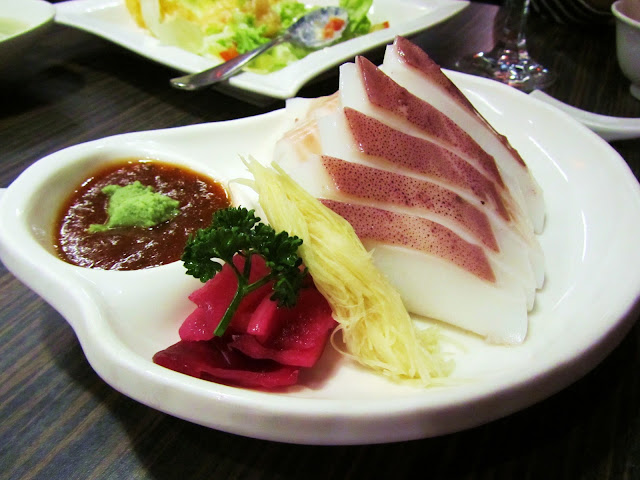 Poached cuttlefish with five spice sauce (無情軟絲)
Squid served with a side of soy sauce paste and wasabi, fresh shredded ginger, and pickled radish is a dish that captures the essence of the Japanese influence on Taiwanese cuisine.  The soy sauce paste, as the name indicates, has five different spices in it, only one of which I can actually pick out... minced garlic.  It probably took more time for the chef to fan out the squid and to shred the ginger than it did for him to actually cook the sublime sea creature.  Simplicity and presentation in detail... the epitome of a Taiwanese dish. 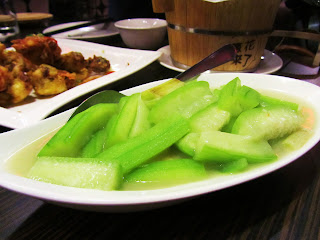 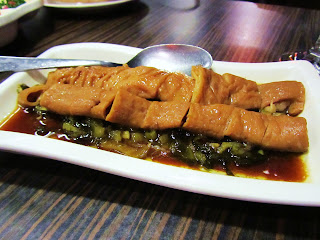 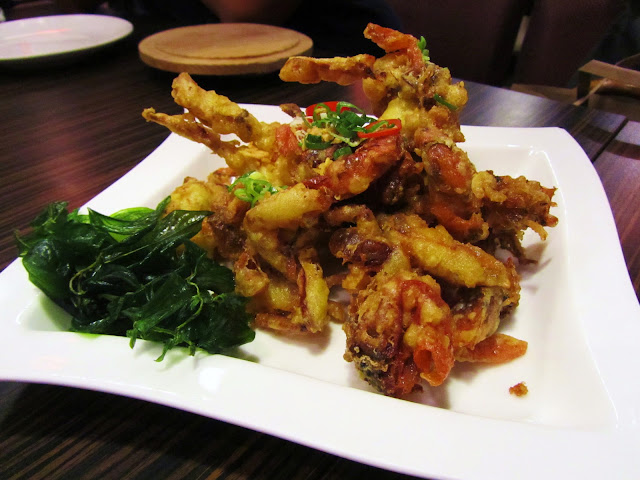 Wok fried loofah with garlic (翻滾吧絲瓜)
Loofah, garlic, and oil... the simplicity here gets carried all the way to mom and pop shops in Agoura Hills. 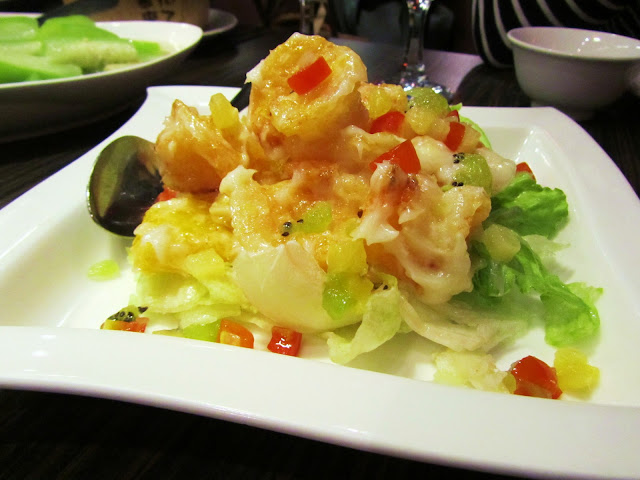 Prawns stir-fried with tropical fruit (果粒纖蝦)
We all know honey walnut shrimp, but I can guarantee that these prawns dotted with pineapple, kiwi fruit, and bell pepper confetti will completely wipe honey walnut shrimp out of your mind afterward.  A mouthful of natural sweetness oozes from the pores of the slightly crispy shrimp with each bite.  It's a stir-fried version of what I'd eat everyday if I were trapped on a deserted tropical island.

One of the dishes that had an amusing name was a pork and bamboo stir-fry called Teacher I'm So Sorry (老師對不起).  I didn't understand the attempt at humor at first, but my aunt explained that back in her elementary school days the teachers would use bamboo poles to smack the rear ends of misbehaving students.  Consequently, someone must have thought of combining strips of bamboo shoots with tender slices of pork in a stir-fry dish.  It's humorous in a slightly morbid way.

Some of the other amusing names are listed below.  These will require a knowledge of Mandarin Chinese and perhaps a familiarity with the Before & After category on Wheel of Fortune to fully extract the humor:
Hopefully this series of posts help everyone gain a better understanding of what traditional Taiwanese cuisine is all about.  It's rare to find this kind of truly authentic Taiwanese food Stateside, so perhaps this will encourage foodies around the world to take a trip to Taiwan for a culinary inspired trip.  Until next time, let's get S.O.F.A.T.