Like black white slice restaurants, the restaurants that serve the most traditional local fare in Taiwan typically don't have menus.  The freshest ingredients are laid out by the front entrance in a refrigerator case or over ice, so when the customers arrive they are able to view the meat and seafood selection for the day.  Ordering is done by selecting what looks the freshest and then letting the chef know how it should be cooked... deep fried, stir fried, blanched, boiled, steamed, or made into soup are popular choices.  After ordering, customers walk in and sit down.

One of my first meals in Taipei was at a traditional Taiwanese restaurant called Sit Fun (喫飯食堂).  Now... there's something to be said here about a restaurant called Sit Fun in Taiwan.  What doesn't make sense is that "sit fun" sounds like a translation for eating (食飯) in Cantonese, which is not typically spoken in Taiwan.  What does make sense, though, is that to sit down and to have fun is what eating is all about! Am I right, or am I right?

Here are some Taiwanese dishes from Sit Fun that we had.  They are cooked in the simple style of traditional Taiwanese cuisine. 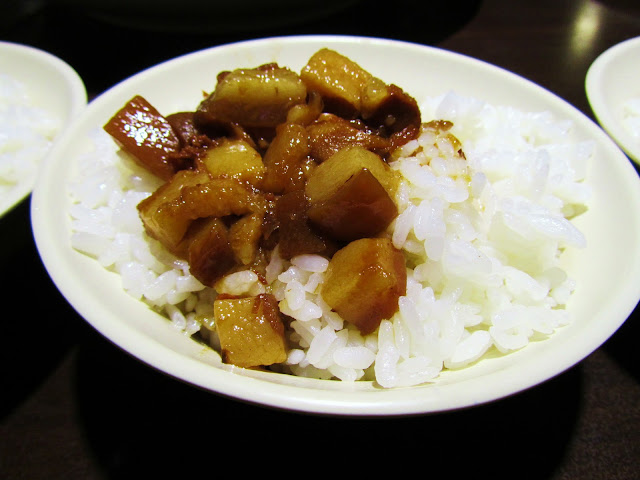 Braised pork rice (魯肉飯)
Cubes of fatty pork are braised and rendered down until the juicy fat almost melts in your mouth.  Topped over steamed white rice, this bowl of pork and rice is as simple and as tasty as it gets.  Although it's one of the best rice items at Sit Fun, what this restaurant specializes in isn't braised pork over rice but actually just pork oil over rice (豬油拌飯).  Lard, you say? Let's just call it pork-infused oil.  Two words... disgustingly delicious. 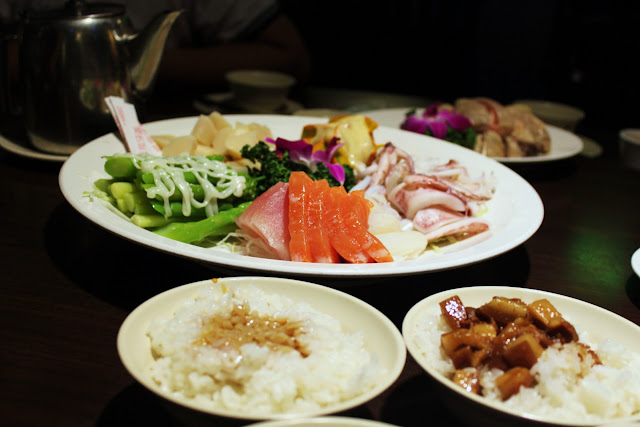 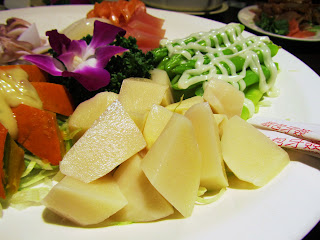 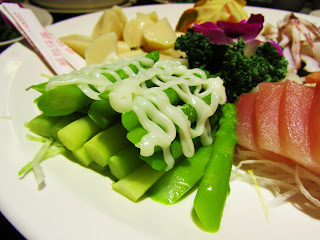 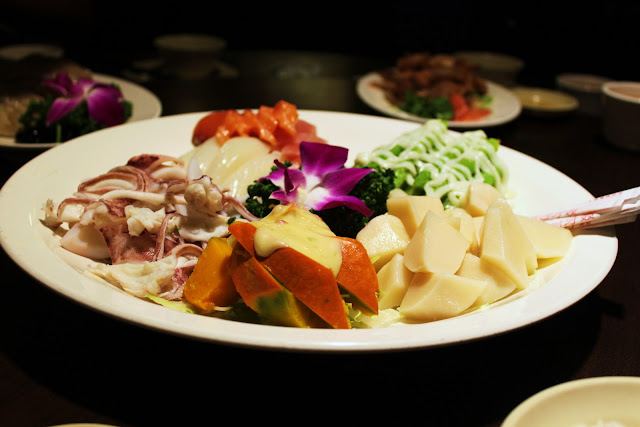 Appetizer platter (拼盤)
Usually the first dish to arrive, the Taiwanese appetizer platter almost always includes the following items: fresh sashimi, tender bamboo shoots, and crisp asparagus.  The sashimi for on this plate consisted of salmon, yellowtail, and whitefish... but why sashimi? Doesn't that seem more Japanese than Taiwanese or Chinese? Actually Taiwan was colonized under Japanese imperial rule for over 60 years, so it can be said that the sashimi at the start of the meal represents the large Japanese influence in Taiwanese cultural and culinary history.

Bamboo and asparagus are typical favorites for Taiwanese.  And as always, those two items have a light layer of Japanese style mayonnaise for a sweet contrast.  Also served on the platter are freshly cut pumpkin as well as baby octopus, both of which are the fresh picks of the day.

To truly make this a pu pu platter experience, the appetizer dish is served with toothpicks.  It's the closest to finger food that we're going to get without going barbaric. 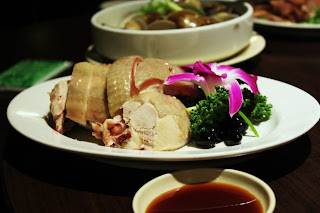 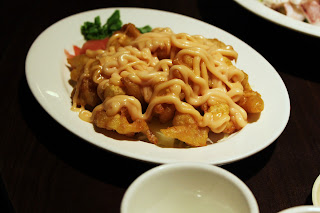 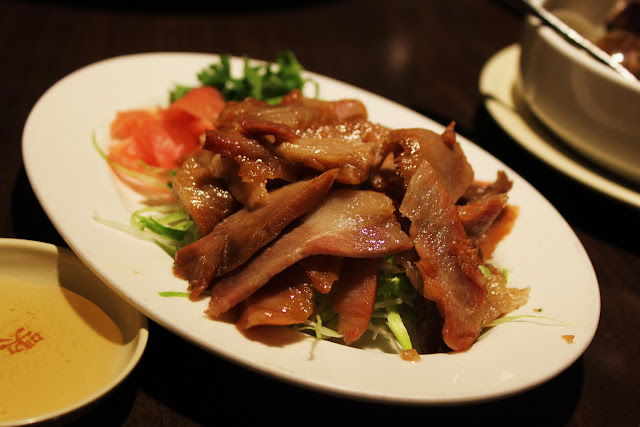 Salt water chicken (鹽水雞)
No, the chicken was not raised in salt water with the fish of the ocean.  Rather, it was poached in salt water and served with a side of garlic soy.  Salty much? Not so.  The majority of the salt doesn't get far past the skin, but the portion that does bypass the skin serves to tenderize the chicken while it's cooking.  The method of cooking is so effortless that it seems almost primitive, but the true sign of tradition and authenticity.

Barbecue pork (台式叉燒肉)
What we typically know as Cantonese style BBQ pork is chasiu pork, that crimson colored sweet pork perhaps akin to the Mexican al pastor.  Well, here lands the Taiwanese version... a less red, less sweet, more moist and more thinly sliced version that is served with both pickled ginger and honey vinegar.  It's tastes like a moist jerky made from honey ham, and it's moist enough to be the most tender sweet and savory meat you will find this side of the Strait.

All of the dishes above have common characteristic of an easily identifiable main ingredient and an accompanying side sauce, both of which are features of traditional Taiwanese dishes.  After reading the previous post, you'll notice similar characteristics.  These simple dishes made from fresh ingredients is one of the ways to distinguish Taiwanese cuisine from others.  And it's this simplicity that makes the dishes so delicious.  Until the next simple and delicious meal, let's all get S.O.F.A.T.