Taiwanese food is a simple food.

Whereas many Chinese stir-fried dishes employ the yin and yang concept of relative equality (meat and vegetables in balanced importance), Taiwanese cooking does not.  Instead, Taiwanese cooking utilizes one star ingredient and complements it with a subservient sidekick of seasoning, spice, or some form of dipping sauce.

Think of it this way: Chinese cooking is like an ice cream sundae.  The ice cream, bananas, whipped cream, chocolate syrup, and even the cherry on top share equal roles within the sundae.  Take one ingredient away, whether it's the ice cream or the cherry, and the harmonious balance of ingredients is greatly disrupted.

Taiwanese cooking, on the other hand, is more like frozen yogurt with sprinkles.  The sprinkles, while important, plays a supporting role to the frozen yogurt.  Take it away, and... well, you still got yogurt.

Here's a look at some of the Taiwanese dishes that I had... along with just a... wait for it... simple explanation. 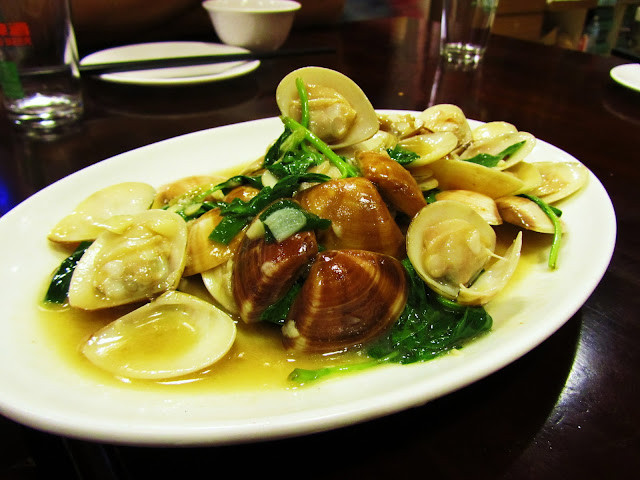 There's something about the combination of garlic and basil that makes anything taste good.  From Italian pasta to Taiwanese seafood, the fragrant basil and biting garlic form a flavor that simply can't be beat. 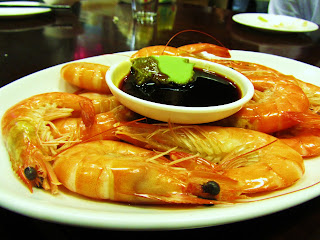 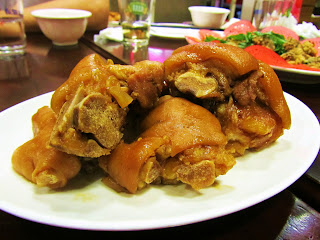 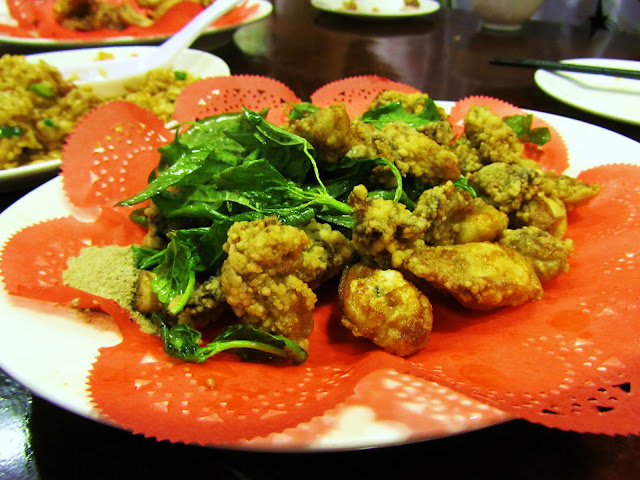 If it weren't for the shrimp being barely boiled, these sea creatures would be considered sashimi.  Halfway between shrimp cocktail and Japanese prawn sashimi, dabbing cooked shrimp in the soy and wasabi combination gives tribute to the olden days of Japanese colonial rule.  This is simply the way seafood was meant to be eaten.

Let's face it.  The pig's foot isn't the most appealing body part for first timers.  But if the same animal can bring joy to people with its bacon, pancetta, and sausage, how can the foot hurt at all? Its fattiness is the most flavorful part.  It's part salty (soy), part sweet (sugar), part spicy (garlic and ginger), and all around tender (rice wine)... this is a great way to experience a traditional Taiwanese birthday food.

Think popcorn chicken.  Okay, now sub the chicken with fresh oysters.  And then add a forest of deep fried basil and a sahara of salt and pepper that you can dip each oyster oval into.  That's a formula for heavenly indulgence... if not a heart attack in the making. 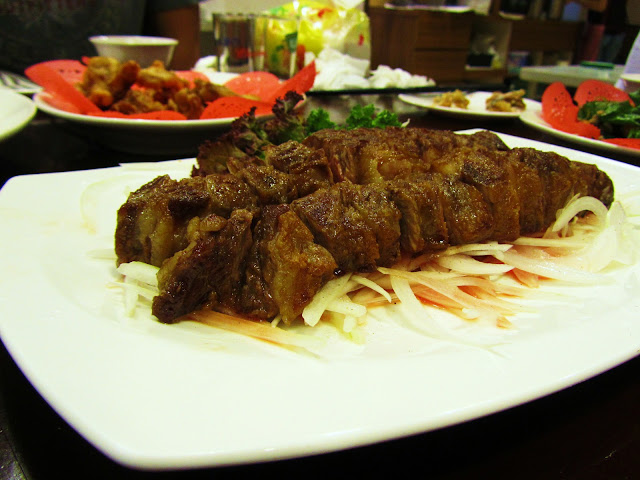 This house specialty is highly recommended by the chef's wife.  Funny, because she runs a restaurant that specializes in seafood.  The chef sears the beef to perfection on the outside while heating the inside to a degree that is just barely passed rare.  The beef is truly tender and flavorful.  If you get a little squeamish about rare meat, there's a bed of raw onions under the loins to help kill off the potential rawness.  Really. 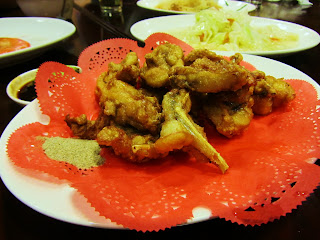 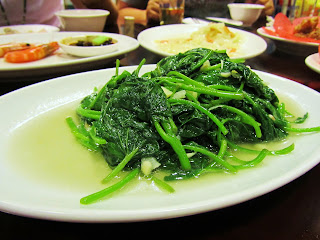 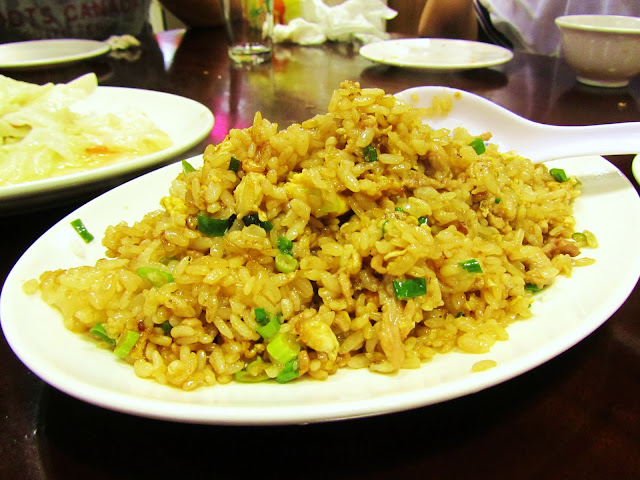 Star ingredient: Frog's legs (鹽酥田雞)
Side seasoning, spice, or sauce: Salt and pepper
Method of cooking: Deep fried
I had my first experience with frog's legs with these little bites.  If the Colonel cooked this up in one of his famous extra crispy batches, it'd just be extremely firm, lean chicken.  Roll them around in the salt and pepper powder, and you would just think that it tastes just like a moist version of chicken breast.  Seriously, even the name in Mandarin means, "chicken of the field."
Star ingredient: Fresh spinach (炒菠菜)
Side seasoning, spice, or sauce: Garlic
Method of cooking: Stir-fried
Everyone needs their greens, right? The best way to have Popeye's favorite is stir-fried with just a few cloves of crushed garlic.  The natural water from the leaves mixed with the garlic infused oil from the wok makes a simply awesome sauce.
Star ingredient: Rice and eggs (蛋炒飯)
Side seasoning, spice, or sauce: Green onions
Method of cooking: Wok fried

Still hungry? There's always fried rice.  But this, once again, is as simple as it gets.  No meat, no other veggies... just rice, scrambled eggs, and finely chopped green onions.  It's wok fried with pork fat and soy in such a high heat that the grains of rice separate into individual grains and eventually melt into the fatty soy sauce.  So good.

Chances are you won't be hungry, though, because chances are that you will be chasing each bite with a sip of Taiwan Beer.  The simple brew is so popular with Taiwanese dishes that Little Lin's Seafood Shop even has a PYT to help serve and pour it for each table.  The pretty young thing could be considered poor young thing; she works the entire night in stilettos.

Not shown are the steamed whole fish, stir-fried rice noodles, and stir-fried Taiwanese cabbage.  Other Taiwanese food and travel blogs such as Angie's Blog, Gygy, and Deep Blue No. 5 all have pictures from their experience.

Although the experience with Taiwanese food always starts off simple with perhaps just a few dishes, it winds up with a multiplex of various meats and seafood and even a few veggies here and there.  Similarly, this post evolved from a simple explanation to a multitude of paragraphs.  Chiah pa! Until some more simple food, let's all get S.O.F.A.T.