Taiwanese and non-Taiwanese, locals and tourists, whoever has discovered this savory soup noodle has fallen in love with it.  It doesn't matter if other cultures have variations of this dish (think Vietnamese pho); even they have the occasional craving for soupy noodles swimming in beef juice.  Even our friend Diana, whose eating habits borderline vegetarianism, will have beef noodle soup.  Meat on the side, please.

There are thousands of beef noodle soup restaurants in Taiwan, many of which claim to have made the champion of all beef noodle soups.  It's no wonder that many of these shops are concentrated around Yong Kang Street (永康街), a main tourist area in Taipei with hundreds of visitors from Japan and Hong Kong, many of whom come specifically to visit world-famous Din Tai Fung dumpling house... and to get a taste of Taiwan's beefy national dish. 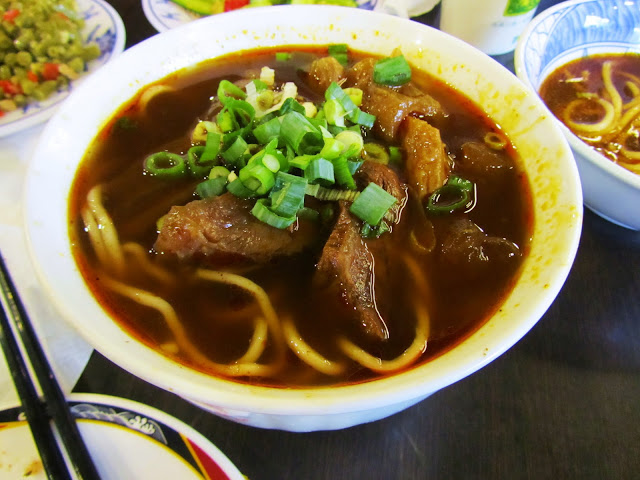 So Yong Kang St. is where Diana and I took Rina, our special guest from Seoul, who indeed fell in love with beef noodle soup (and gua bao, among other Taiwanese specialties).  We sat down at Lao Zhang Beef Noodle Shop (老張牛肉麵), the 2006 champion of the annual Taipei beef noodle soup competition.  Lao Zhang (also known as Old Chang's) specializes in Szechwan flavors, which means they use plenty of chili pepper, garlic, and Szechwan peppercorn, a spice that effectively tingles your throat with a numbing spiciness.

While Rina slurped up the soy and tomato infused soup and while Diana enjoyed her meatless version (think clam chowder without the clams), I took delight in Old Chang's cucumber and green bean appetizers, both of which are peppered with red chili.  But what I really enjoyed from Old Chang's was the famous spicy steamed pig intestine (粉蒸肥腸).  Yup, you heard me... pig intestine. 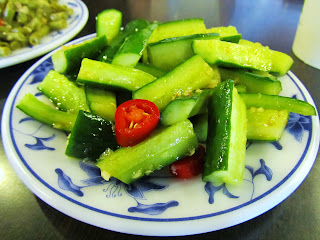 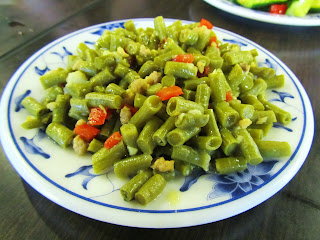 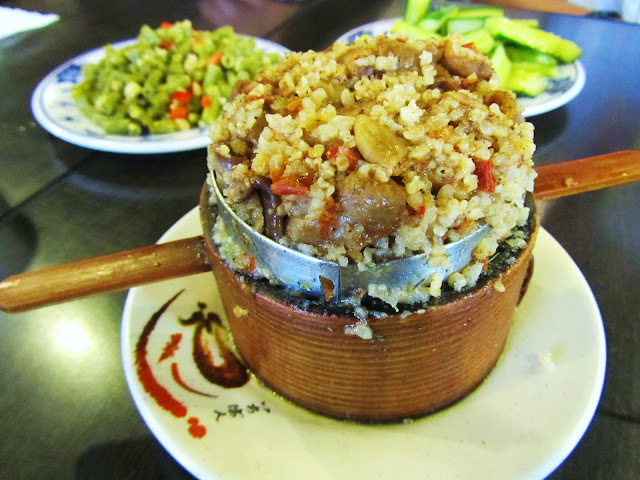 The spicy steamed pig's intestine is a fen zheng (粉蒸) dish, which roughly translates to a dish that is powder steamed.  The powder it refers to is a type of rice powder, a sort of rice or grain that resembles couscous.  The grains of rice look like they have been broken in half by a crushing, grounding, or pounding process.  Added to the the rice powder are usually spices such as star anise, five spice powder, pepper, and sometimes cumin or cinnamon.  Wash the imagery of intestine coils out of your brain, and fill them with thoughts of tofu skin with sticky rice covered in garlic, chili, pepper, star anise, and the ever fragrant Szechwan peppercorn.  You will think it's amazing-delicious.

Even Rina, who may have been slightly averse to internal organs prior to tasting this dish, tried it... and liked it.  When I showed oolong-milktea pictures from my trip, he made some hunger-induced oooh and ahhh noises.  What he ooohed and ahhed over was the version of the fen zheng dish made with pork spare ribs (粉蒸排骨)... equally as delicious as the intestines and perhaps just a tad less gut-wrenching.  Oh, and did I mention that there's a layer of soft and fluffy sweet potato at the bottom of the bamboo steamer soaking up all the spicy flavors and fatty oils that have dripped from down from the pork? Oooh, hell yeah.

But back to beef noodle soup.  Before I could even finish the bamboo steamer of pork, Rina and Diana had already demolished their bowls of noodles.  Tender beef? Gone.  Chewy noodles? Gone.  Spicy soup? All gone.  Although the fen zheng pig intestines were good, it was clear that the star of the show was still the beef noodle soup. 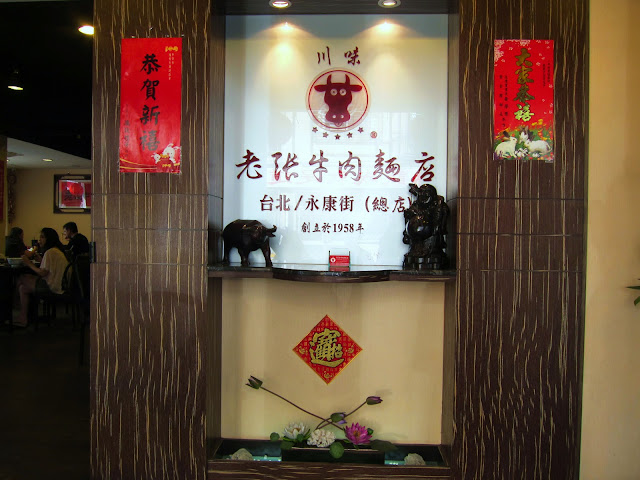 If you can stomach it, I'd suggest heading to Taoyuan Street (桃園街) to try another famous beef noodle soup institution (one of oolong-milktea's favorites).  There are tons of beef noodle stores, stalls, and restaurants in Taipei... including one owned by a Persian man married to a Taiwanese lady.  You're sure to find one that you love.  Until then, let's all get S.O.F.A.T.