In just a few hours the two of us had consumed three German sausages, fries complete with two dipping sauces, two pints of beer, shrimp ceviche on a crunchy tostada, and strawberry froyo... in a cone.  Did I mention that we stopped by for some Starbucks, a chocolate croissant, and mochi ice cream too? We had formed the basis for a Tums/Mylanta/Beano commercial in one afternoon.  It was now almost 6:00 p.m.  Time for dinner! 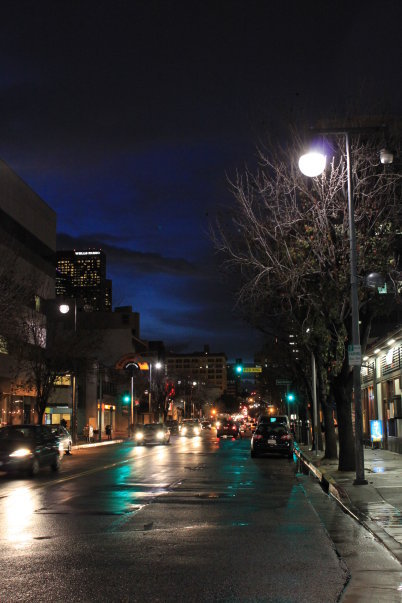 Sunset from 2nd St.
The street lights and headlights are reflected off the wet blacktop.
Walking around the streets of Little Tokyo, we stopped at Daikokuya (大黑家), a popular ramen house (ramen-ya) that has been a favorite of mine for quite some time now.  During the prime dinner rush (and even close to midnight), the wait time runs parallel to the wait time for Splash Mountain.  It didn't matter that it was cold, windy, and rainy outside.  Daikokuya had just what we needed... a hot bowl of noodle soup.**


The menu is simple.  Although there are appetizers and other entrees, it is clear that the ramen is the shining star.  (It's centered smack dab in the middle of the menu.)  The foundation of Daikokuya's ramen is not the noodle but the broth, created by simmering pork bones on low heat overnight and throughout the day.  Sunday's store closing time is posted on the window outside: "when the broth runs out..." 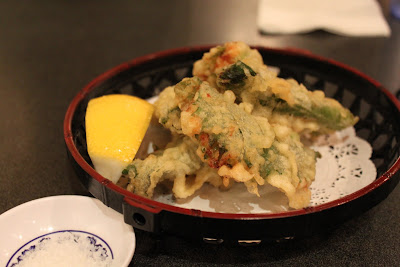 Smell the shiso.
Sesame leaves have aromatically strong flavors in both taste and smell.
I rarely order from the appetizers section at Daikokuya, but this time I noticed a dish made from deep-frying spicy tuna wrapped in shiso (the leaves from the sesame plant).  Shiso is a favorite flavor of mine, so I had an urge to taste the spicy tuna wrapped in shiso.  Like basil, shiso leaves smell delicate in their natural state, but they inject powerful punches into the tongue.

The three layers of the spicy tuna hit my taste buds at different times.  First, the crunchy tempura batter mediated between the sour lemon juice and the stinging grains of salt.  It kicked my taste buds into gear.  Next, wafts of the shiso found its way into my nostrils as the shiso danced on top of my tongue.  Finally, a tender taste of the fried spicy tuna.  Spicy tuna is usually consumed raw, so I think my taste buds were expecting it to be that way.  After the deep-fry, the spicy tuna was a fluffier version of the canned Bumblebee.  A bit anti-climatic but complacent.  No worries, the ramen had arrived. 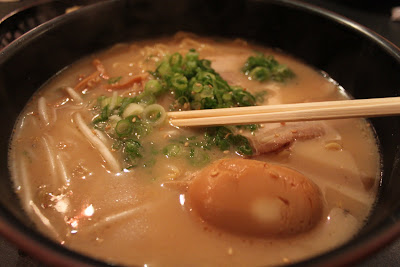 So simple.
The bubbling broth brewed from bones forms the calming caramel color.
What I truly look forward to when eating Daikokuya's ramen is the pork... just swimming in swine soup.  The circular slices of pork seem almost geometrically inscribed in a ring of fat.  I relish in this fat.  I relish it in the same way some of my friends relish in bacon and its fat.  Just close your eyes, and imagine pockets of flavor that explode with every bite.  And they are trapped in the caverns of your oral digestion.  They can't escape.  HA.  And by the time you open your mouth once again, the flavorful pork and its flowing, juicy fat have already fallen down the pitch black esophagus to their painful, acidic destruction.  BOO YA.
While I had been focusing my attention on the meat, the noodles had been just bathing away in the flavorful broth... soaking up all the juicy pork fat that I had left behind in the bathtub... er... bowl.  The noodles had the honor of befriending the pork in a Japanese jacuzzi.  Gah, the noodles are so lucky. 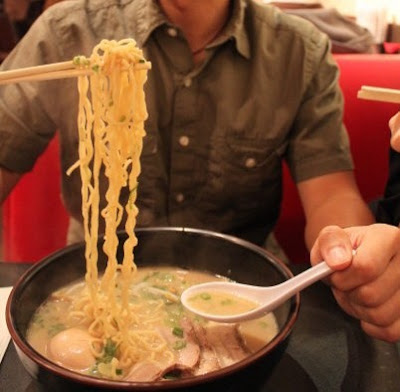 Ssssluuurrrrp.
Japanese culinary culture says that the louder the slurp, the better the taste.
In Japanese ra means to pull, and men means noodles.  So with the help of my bamboo chopsticks, I pulled every strand of noodle into my mouth.  If I was to be arrested for gluttonously inhaling carbohydrates, my defense would be, "Hey, I was just abiding by the dictionary definition."  Slurp, slurp, slurp.  The completion of my ramen indicates the completion of this post.  Until next time, slurp away! Let's all get S.O.F.A.T.
**Refer to Post 9: Rainy Days in Taipei Call for Beef Noodle Soup.
Mentions:
Rina, what a fatty day! Thanks for the beautiful shots of the street and scenery.
Diana, thanks for joining us after work and huddling under the awning with us in the rain.
ML - 20100306/20100209
Posted by S.O.F.A.T. (Stories of Food and Travel) Blog at 11:53 PM