I ate diaphragm.  Or at least that's what the menu read.

While in the Bay Area for a quick 20 hours, Vickee took me around her hood for a quick bite at Milpitas Square before my return flight to LA.  Of all the different Asian restaurants in Milpitas Square, we stopped at Taiwan Noodle House (台灣排骨大王), a small mom and pop shop that serves Taiwanese snacks and a variety of Taiwanese-style noodles.  Of course, the literal translation of the restaurant's name from Han characters means Taiwan Pork Chop King... but hopefully the off-translation just meant that the food was authentic.

And authentic it was.  The menu listed 'diaphragm' as a specialty! Can you get any more authentic than that? Since it was so different from anything on the menu (trust me, everything else on the menu is pretty standard), I had to try it.  Plus, when I had asked the owner what she recommended, the she immediately responded, "Would you like to try diaphragm?" 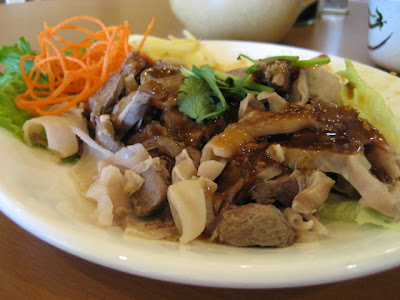 So adding onto our soup noodles with deep-fried pork chops, we ordered a diabolical diaphragm as an appetizer.  How did it taste?

My second reaction was that it didn't taste, smell, or look like anything out of the ordinary.  No strong flavors? No strange after taste? Hrmmm... so I began to wonder what exactly this diaphragm was.  We asked the boss, and she explained that diaphragm (豬肝蓮) actually refers to the meat surrounding the liver of the pig.  Is it really diaphragm? No, although had it been, Andrew Zimmerman would have been quite proud.

My third reaction was that it was really good.  Dipped in the traditional Taiwanese garlic soy sauce paste and garnished with fresh cilantro and sliced ginger, the flash-boiled meat that circumscribed the pork liver made for a really enjoyable appetizer.

Would I ever eat it again? You betcha.  (Sarah Palin-esque?) 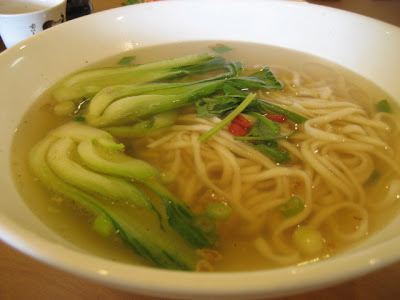 The bowl of noodles that arrived soon after was not bad at all.  Although there was a viscous layer of oil across the top of the noodles, the blanched baby bok choy helped provide a healthier balance.

I was really delighted to see a few goji berries sprinkled into the soup.  Not only do that further the health benefit ever-so-slightly, it really broke up the monotony of the yellows and greens in the bowl.  (While often used to slow-cook light soup or broth in Asia, the health benefits of goji berries have recently picked up in America.  You can now find them in the aisles in supermarkets such as Whole Foods, Trader Joe's, and Henry's.)

I added a few shakes of the white pepper to give the soup a slight kick, but I had realized why the soup was a bit bland when the fried pork chop arrived. 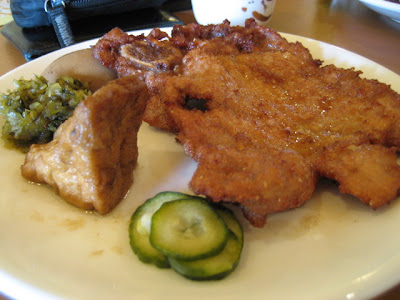 The pickled cucumber and the chopped, pickled mustard greens are served alongside to help break the savory flavors and to cleanse the palate from the oils of the deep-fried pork chop and oily soup.

Not bad.  Not bad at all.  It definitely hit the spot quickly, but as Vickee mentioned, "it's not like we can't make this at home."  True, the noodles did resemble the instant dry noodles that can be purchased at an Asian supermarket.  (Funny how 99 Ranch is only 3 doors down...)  But I wasn't disappointed at all.

So I tried 'diaphragm' for the first time, and I ate a pork chop the size of my face with a bowl of noodles the size of my torso.  Not bad for less than 20 hours in the Bay Area.  Until next time, let's all get S.O.F.A.T.