The girl scouts nowadays have a few tricks up their sleeves, don't they? This year I felt mentally ambushed when I was returning DVDs at the local Blockbuster.  (Yes, I still have an active Blockbuster membership, and I intend to use it 'til the day I die.)  Instead of completely avoiding the temptation to buy the cookies this year, I tackled my weakness head on.  2010 was the year I planned to buy a box.  Just one box.  Samoas, perhaps.  A friendly co-worker had already secretly handed me some Thin Mints at my desk, so I had my mint chocolate fix already earlier in the week.  Okay, Samoas.  It was decided. 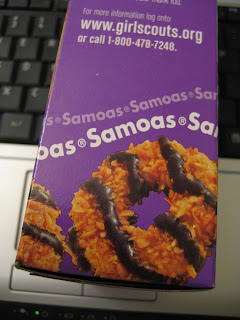 I dropped four singles on the table and picked up my purple box of coconut-covered caramel cookies.  Feeling satisfied that I didn't even browse the other boxes, I turned to walk away.  But just as I was turning away, the blond eight-year-old asked, "Sir, what else would you like?" Now that I think about it... she must have been at least ten years old to be asking that kind of sales-driven question.
"What else would I like, huh?" Secretly, I wanted to give her 'the look' and yell in frustration, "A higher paying job so I can buy more of your damned cookies, and an even faster metabolism so that I can eat ALL the damned cookies!" But I refrained.  Good job, Michael.  I opened my flat, dilapidated, black weathered wallet and peered inside.  Three Lincolns.  I was one dollar short of four boxes.
"Okay, here's twelve bucks... I want the Thin Mints, Trefoils, Do-si-dos, annnnnd... let me check my car for some change."  So while I had thought my plan to buy just one box was going to work out perfectly, my brain was thinking, "I reeeaaally hope there's a dollar worth of change in the car..." Honk, honk.  I opened the center console.  Two quarters and a Euro.  Not enough.  I opened the compartment above the cup holders.  A glistening pool of copper pennies appeared... 1, 2, 3... 20, 21, 22, 23, 24... 24.  I'm at 74 cents.
Pure anguish flowed through my bloodstream.  $3.74.  I CANNOT BELIEVE I AM 26 CENTS SHORT OF A BOX OF COOKIES.  RI-DI-CU-LOUS. 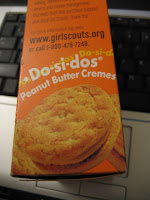 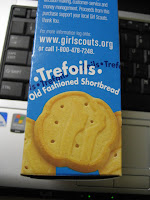 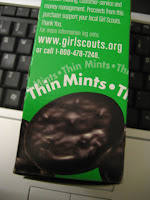 As much as the mom wanted to help her daughter sell all her cookies, I knew at this point... she seriously thought I was insane.  Like... I Love Lucy insane.  "I don't think the bank will take a Euro..." and trailed off.  I think my eyebrows furrowed a bit at that point.  Either this lady has never been out of the country, or she really doesn't want my damn money.
But before I could say sorry or even tell her where you could trade in a Euro for U.S. dollars, a very pleasant (and smart) lady overhead the conversation.  She paused as she was passing by and said, "I'll buy your Euro from you!" 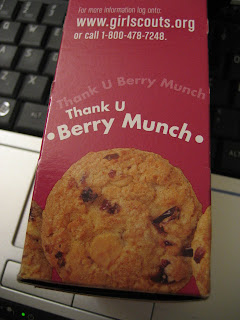 And with that she reached into her pocket, pulled out four quarters, and dropped them one after one onto the table.  1, 2, 3, 4 quarters... 5, 6, 7, 8 quarters... I was speechless.
"Uh... uh... b-duh... thanks!" Uneasy laughter and more stammering.  "Thank you so much!"
"Here you go!" I grabbed the last box in such a hurry that I didn't even look.  (How ironic... they turned out to be the Thank U Berry Munches...) Embarrassed yet somewhat self-satisfied I ran to the car with my loot.  And when I turned the key to start the car, I said to myself, "This is the LAST year.  FOR REAL."