I got a chance to meet Marian the Foodie when she joined the Six Taste team last year.  Lucky for me (and all of us at Six Taste) Marian is an extreme foodie who has many culinary connects across town.  Even luckier for me... she was kind enough to invite me and Ken to attend a private tasting menu that Chef Andre Guerrero of The Oinkster put together.  This nine course dinner took place with Marian and her foodie friends at Chef Guerrero's latest restaurant called Maximiliano.  I got a chance to see Chef Guerrero's passion for cooking, talk to him about his love for Chinese food... and drink a lot of wine.  Oh, and I met OG food blogger kevinEats too.  Worth the two hour drive up from Orange County? I'd say. 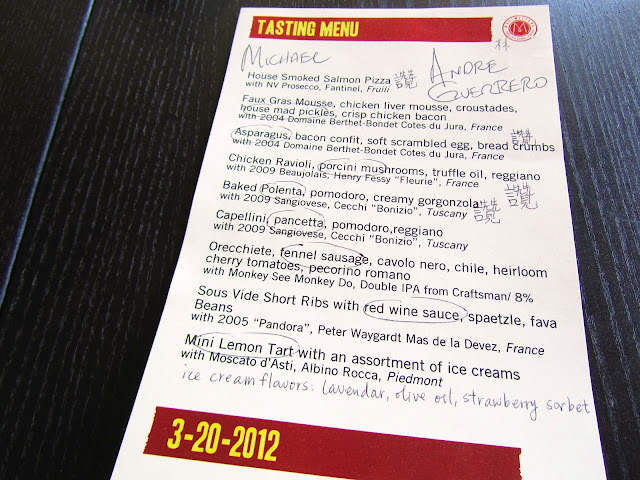 We sat down to a house smoked salmon pizza served with a glass of Prosecco.  The thin crust was warm, and the smoked salmon was the right amount of salty.  The pesto gave me a world of happiness, but my favorite part was the dollop of Burrata right on top of my slice.  That topping, along with the chopped scallions, gave a freshness to every bite and complemented the saltiness of the smoked salmon so well.  Best pizza I've had in a long time. 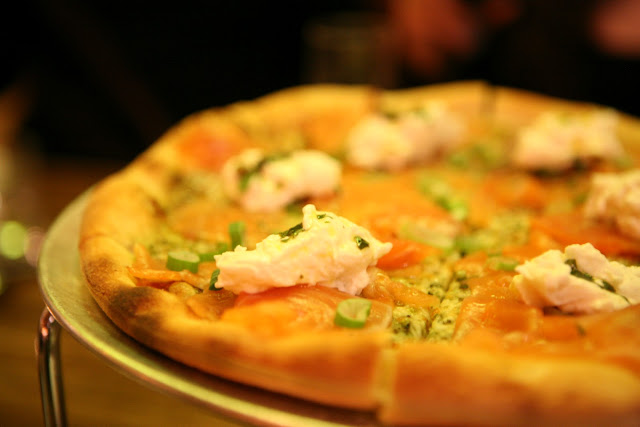 Our next plate was a faux gras mousse, chicken liver mousse, croustades, house mad pickles, and crisp chicken bacon.  Yep, you read that right... faux gras not foie gras, and thankfully because I embarked on an eight course foie gras dinner in the week prior, and I was not ready for another taste of foie.  The spreadable mousses on the crisp croustades made for an unbeatable texture contrast.  The house mad pickles were ever so slightly spicy yet full of lip puckering sourness... absolutely delightful.  Perfect for cutting the richness of the liver mousse.  And the chicken bacon? Can't... deny... bacon. 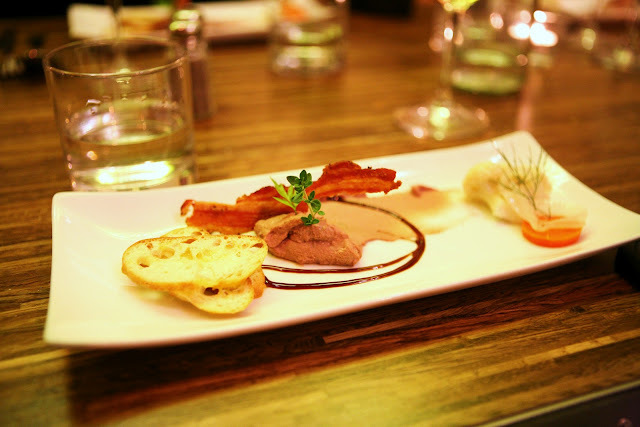 Next up was a highlight of dinner... asparagus, bacon confit, and soft scrambled egg topped with bread crumbs and served with a 2004 Domaine Berthet-Bondet Cotes du Jura from France.  Everyone agreed that this was the most comforting of all the dishes, especially with the pork belly bacon confit at the center of the dish.  The asparagus was tender yet not overcooked or too soft.  The soft scrambled eggs reminded me of a soft cheese or almost like the slightly burned top of a potatoes au gratin.  It was just so homey and innocent... nothing could taint the purity of this dish. 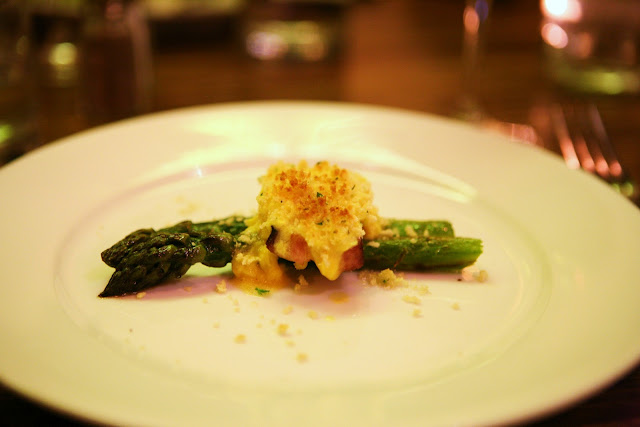 The next four courses were all different pasta dishes that hit more to the core of Italian home cooking.  The porcini mushrooms really came through in the chicken ravioli topped with truffle oil and reggiano cheese.  The cream sauce really allowed me to savor the flavor of the pasta.  It was served with a 2009 Beaujolais by Henry Fessy "Fleurie" of France.
The baked polenta was unlike anything I've ever tasted.  Prepared with pomodoro and creamy gorgonzola, the polenta was truly rich in flavor.  I scooped the pomodoro over the square of polenta repeatedly hoping to recreate the last bite I took.  This, and the next dish, were served with a 2009 Sangiovese by Cecchi "Bonizio" of Tuscany.
Course number six featured a classic Italian pasta.  A capellini with pancetta, pomodoro, and reggiano really captured my heart.  The noodles were perfectly al dente, and the pancetta popped with every bite.  I loved that the pasta was swirled in an updo and that it was dotted with pancetta confetti.  It seemed like this dish oozed with love and passion.  If I didn't already know Chef Guerrero was in the kitchen, I could have sworn an Italian nonna prepared this dish.
Our final pasta dish was an orecchiete.  It had fennel sausage, cavolo nero, chile, heirloom cherry tomatoes, and pecorino romano in it.  Orecchiete has never been a favorite of mine, so what really stood out for me in this dish was the fennel sausage and the cavolo nero.  This meat and vegetable combination really play well against each other, one with the more savory umami flavor and the other with the more cleansing touch.  This was paired with the Monkey See Monkey Do, a double IPA from Craftsman.
The last entree to arrive was short ribs prepared sous vide with red wine sauce, spaetzle, and fava beans.  Even though we were given serrated knives, there were not necessary because the short ribs were ridiculously tender.  I could slice through it like butter.  The red wine sauce really made this dish though.  A combination of savory, salty and sweet clung onto the short ribs like paint on canvas.  The spaetzle really sealed the deal for me.  I swiveled the spaetzle around on my plate until it was completely coated with the red wine sauce before eating it.  I could have closed my eyes and died right then and there.  This final entree was served with a 2005 "Pandora," by Peter Waygardt Mas de la Devez in France. 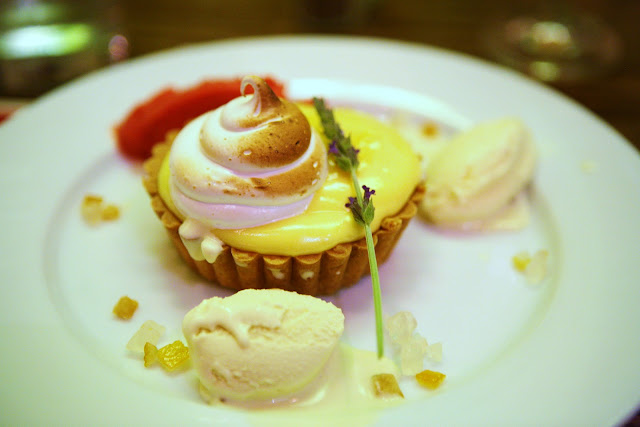 But no time to die just yet... eight courses completed and only dessert to go.  Everyone's got a second stomach for dessert, right? What was listed on the menu was a mini lemon tart, but what was placed in front of me was nowhere close to being mini... not that I'm complaining.

The lemon cream had just enough citrus to cause a tart tingle but not enough to cause squealing of any kind.  Its creaminess could not be described in any way other than heavenly.  The coif of cream at the top was almost like a cute Asian cartoon poop.  It was light, airy and fluffy... and the highlight of burned brown on just one side made for a picturesque garnish that was almost too beautiful to break with a fork.

Surrounding the lemon tart was a trio of ice cream: a lavender ice cream, olive oil ice cream, strawberry sorbet.  The lavender ice cream was rightfully floral, a giddy girl's dream.  The olive oil ice cream was remarkably refreshing, a smart way to cleanse the palate.  The strawberry sorbet was perky and foreshadowed the coming summer harvest.  Served with a Moscato d' Asti, the lemon tart was a great way to end a nine course meal.


A big thank you goes out to Marian for the invite to dine with kevinEats and to partake in Chef Guerrero's old school Italian dishes.  It was definitely a fun experience.  Until next time, let's all get S.O.F.A.T.
This post features photography by Ken Lee.
ML - 20120320
Posted by S.O.F.A.T. (Stories of Food and Travel) Blog at 12:00 PM