Post 72.1: Taipei - Wrapping Up Two Weeks in Taiwan, Part One

I ate so much during my two weeks in Taipei that I could write one post about each meal per week for an entire year, and I wouldn't even be finished.  But since there's a huge backlog of meals from this year that need major attention, it's time for a Cliff's Notes version of my Taipei trip.  Here is one picture that was the most memorable part of each day of my two weeks in Taiwan. 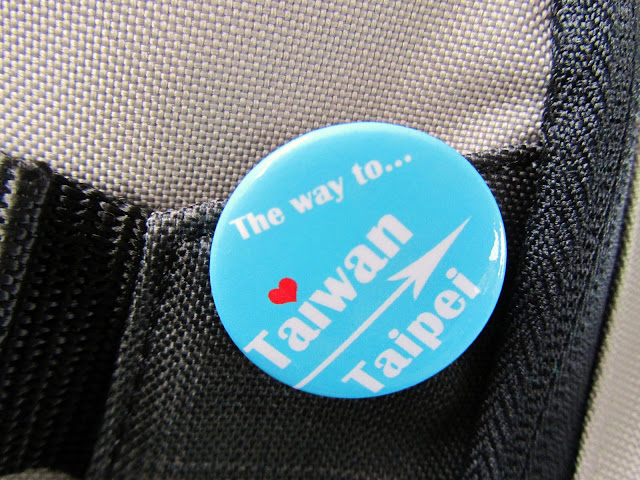 September 1: Anxious to board
Sporting my enthusiasm for the trip by way of button at LAX. 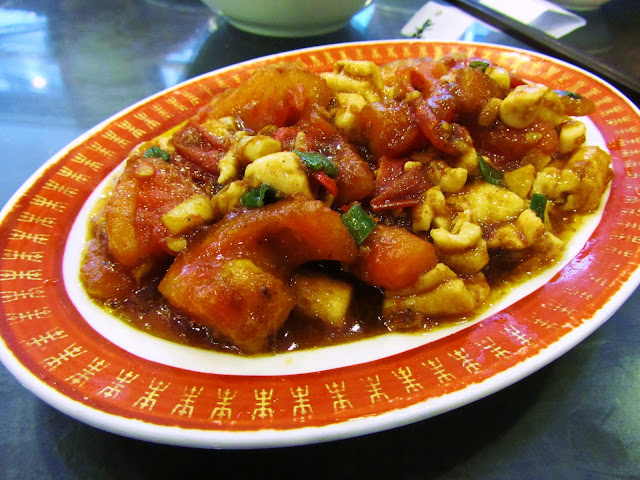 September 2: A more than welcome first meal
After a total of 24 hours of traveling (front door to front door, including a 6 hour layover at Incheon Airport), I was desperate for any meal outside of an airplane or airport.  We stopped by a local place (金春發牛肉店) for their specialty beef dishes.  The curry chow mein (炒咖哩牛肉麵) and this bone marrow dish (炒龍骨髓) stir-fried with tomatoes, garlic, chili and Taiwanese BBQ sauce really hit the spot. 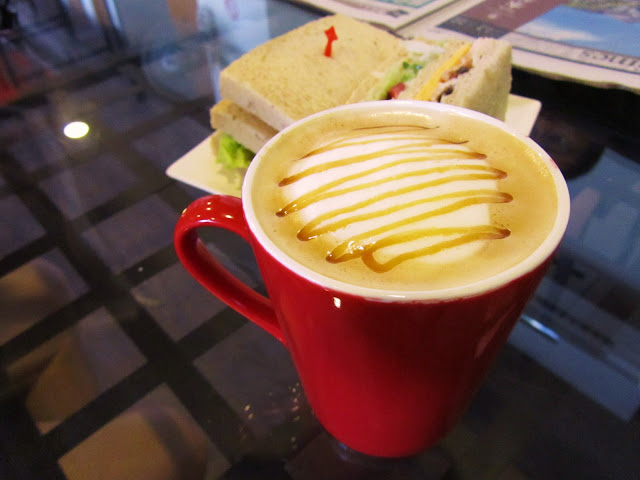 September 3: A cup of home
I discovered many Western style coffee shops serving American breakfasts after waking up in our newly relocated family home of Tamsui.  The cafe downstairs is owned by a Taiwanese-Australian, and it serves eggs, toast, and lattes.  Heinz and Tabasco, labels of American authenticity are self-serve, a friendly reminder of home. 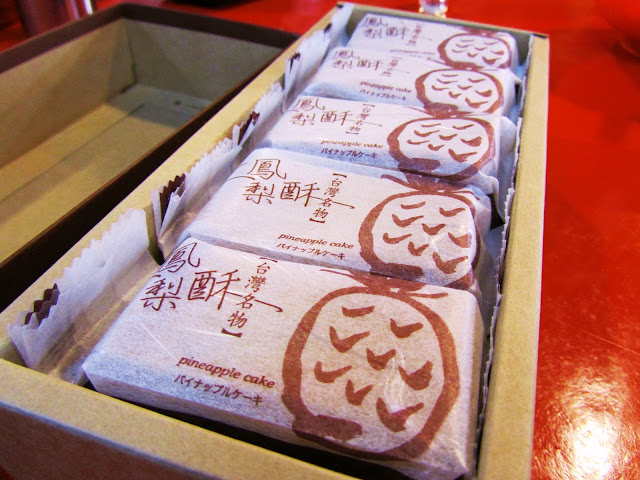 September 4: Pineapple cake by the box
Overly excited at the thought of pineapple cake, I immediately bought two boxes of 10 each upon seeing the organic variety displayed in a local bakery in Yonghe District.  Pineapple cake or shortbread, one of Taiwan's most famous pastries, must be consumed immediately due to the lack of preservatives.  I had forgotten that I had two weeks left before returning stateside.  Consequently, I ate one pineapple cake per day til the day of departure... then I bought a few more boxes to take home. 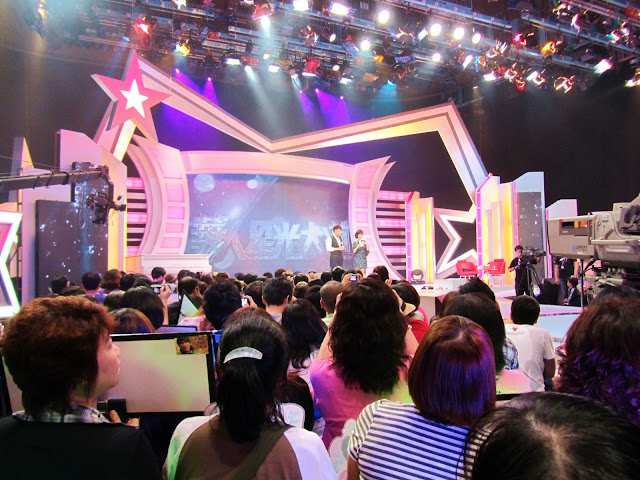 September 5: Star sighting
A fellow Triton invited us to CTV (中視) for a taping of One Million Star (超級星光大道), Taiwan's version of American Idol.  The majority of the audience was middle-aged housewives who squealed like school girls at the sighting of Aska Yang (楊宗緯).  If seeing Aska weren't enough, a connection to the executive level of CTV led us to meet David Tao (陶喆) who happened to be a guest judge on the show. 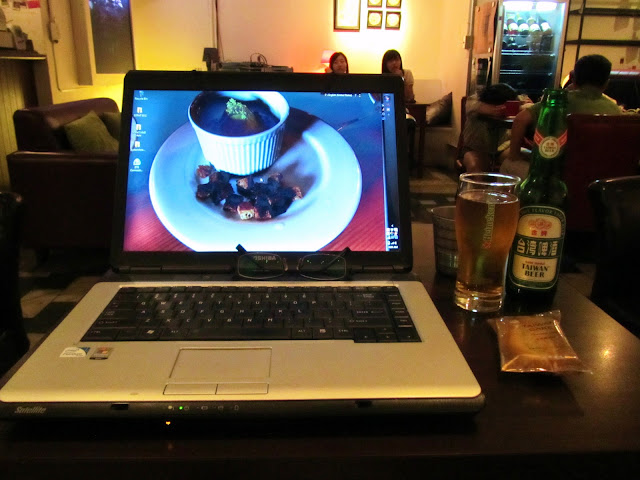 I met up with Diana at Insomnia (睡不著), a dimly lit café filled with local college students chatting about the campus gossip and studying for exams.  Diana and I reacquainted ourselves with simple phrases in Mandarin such as 7-Up (七喜), long removed from our memory due to the lack of language practice in America. 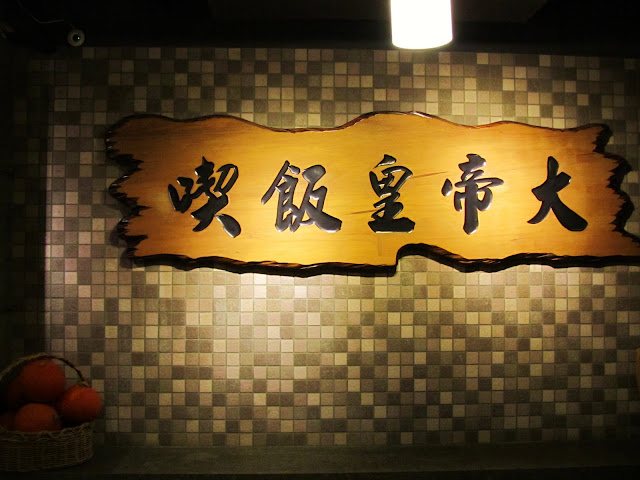 September 7: Taiwanese live to eat
During a visit to Sit Fun for traditional Taiwanese food, my uncle pointed out some of the local sayings posted up on the restaurant's walls.  This phrase, uttered in the local Taiwanese tongue, says that eating trumps even the emperor. 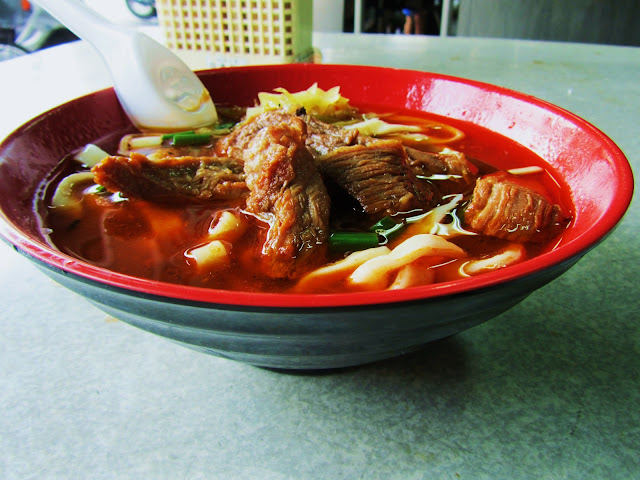 September 8: A bowl of Taiwan's national dish
Almost a week into my trip, I finally scored some beef noodle soup from Old Chao.  Sweating from the humidity, the heat, and the temperature of the piping hot soup makes for an exhilarating eating experience. 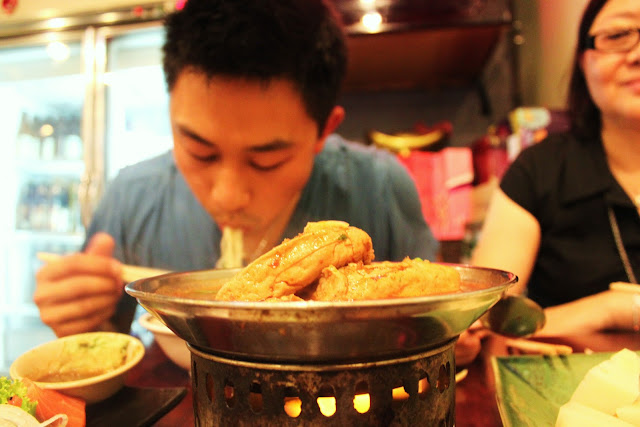 September 9: I'm eating... don't bother me
Anna stealthily takes a shot of me scarfing down some noodles from my favorite hole-in-the-wall while my aunt peers over from her side of the table.  Spicy stinky tofu gets heated up by the fire under the steel hot pot.  Noodles and stinky tofu... just another day in Taipei. 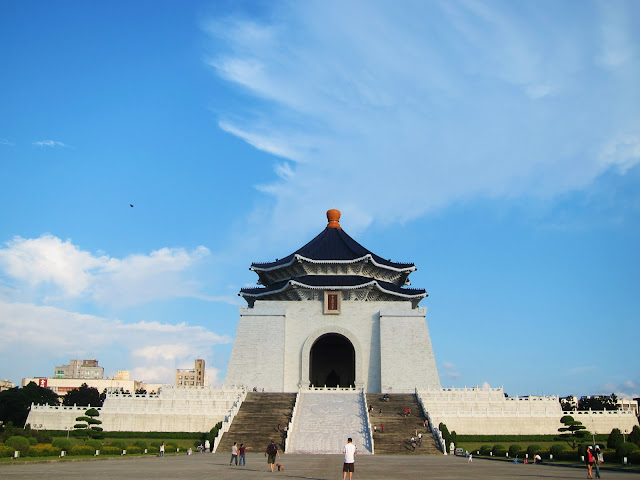 September 10: Merciful sub-tropic summer weather
Summer in Taiwan is a force to be reckoned with, but one this sunny Saturday afternoon in Taipei, the sky revealed some beautiful blue hues to display as a backdrop at Chiang Kai-shek Memorial Hall.


September 11: Mid-Autumn Festival
This holiday means different things to different people.  For some, it might mean a day to eat mooncakes to commemorate the overthrow of the Mongol rule in the Yuan Dynasty.  For others, it might simply mean an outdoor barbecue in the summer night.  For my family, it means eating Japanese food... no clue why... we've eaten sushi and sashimi on this holiday for years now.  Not to break from tradition, my aunt and I dined at a Japanese restaurant (川賀屋日本料理) in Tamsui District.  While there I was able to capture the celebration in the streets outside the restaurant. 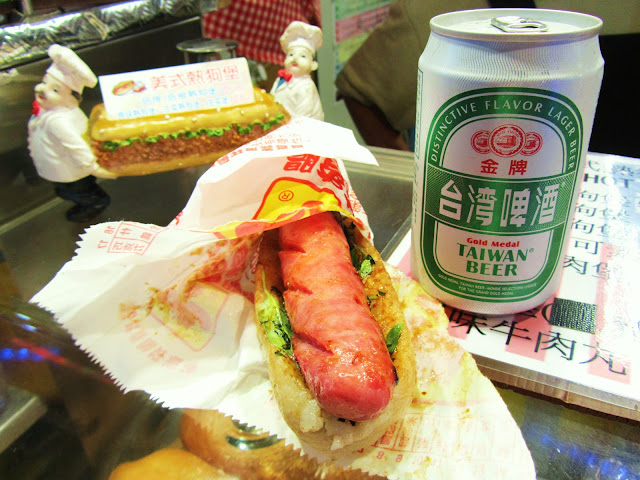 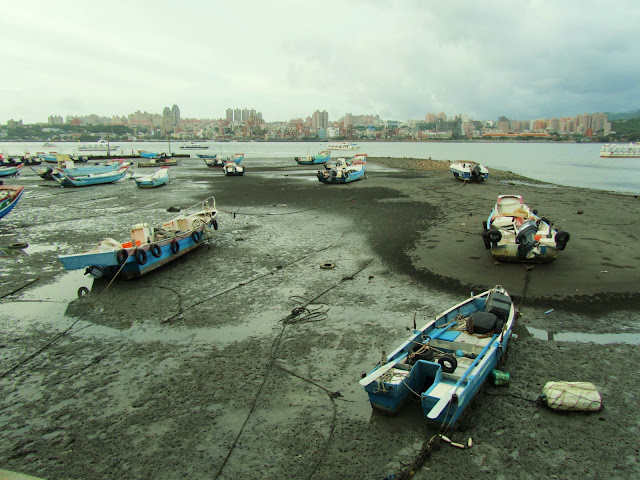 September 13: Riding along the Tamsui River... on a bike
Having finally mastered how to bike ride in the recent years, namely from a biking adventure around Stanley Park in Vancouver, Rina urged me to take another biking tour... this time along the Tamsui River in Taipei.  We took the ferry across away from the city to the Bali District (八里區) side of the river and rented bikes for just 100 NTD (a little more than 3 USD) for unlimited usage.  Low tide, fishermen taking respite, an ah gong practicing some tai chi... there was something just so tranquil and peaceful on this side of the river.  This is something I must do again. 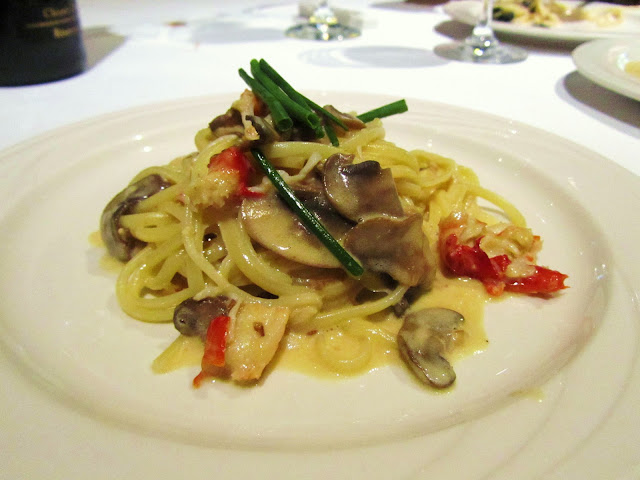 September 14: Uni fusion
A visit to Taipei or Tokyo requires a trip to indulge in exotic Japanese fusion pastas from Bellini.  Thanks Nicholas and Tiffany for joining me in the cod roe spaghetti with yuzu (和風柚子明太子麵), calamari and squid ink linguine (茄丁墨魚汁扁平麵), and this sea urchin cream linguine with king crab meat and mushrooms (北海道蟹肉海膽醬扁平麵).  Oh, and don't forget about the two pizzas, appetizer, dessert, and bottle of red... a great way to wrap up two weeks of fooding in Taipei.  Good job, guys. 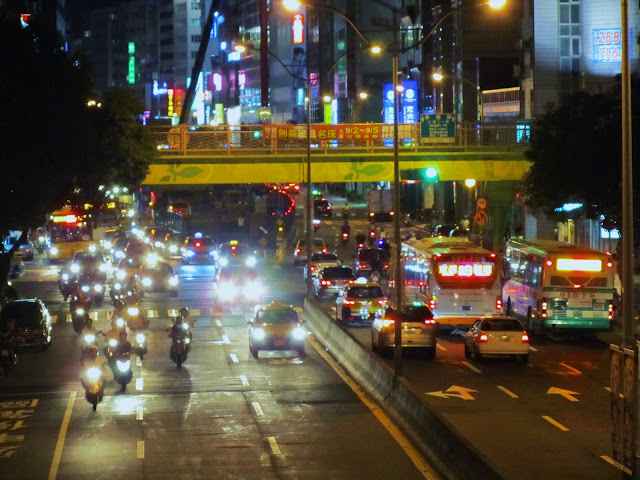 September 15: Nanjing Road nightscape
Even at midnight the streets of Taipei bustle with rapid movement from mopeds, taxis, buses and pedestrians.  While standing on a pedestrian walkway over Nanjing Road on the final night of my trip in Taiwan, I wondered where everyone needed to go in such a hurry.  This city definitely inspires you to go, go, go! 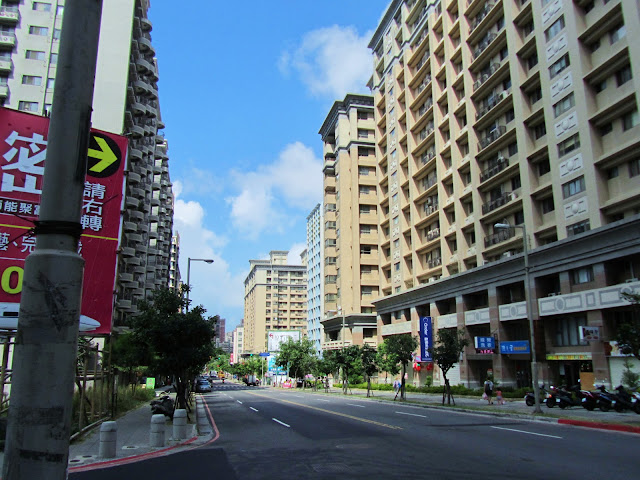 September 16: A contrast to city life
From bustling Taipei proper to Tamsui District in New Taipei, anyone can distinguish downtown city life from what is arguably one of the calmer, more serene suburban areas of the city.  An hour outside of Taipei City, you can hear the song of the cicada louder than the roar of the moped motor.  There is fresh air, blue sky, and a street to safely jaywalk across.

There are bound to be more trips to Taipei in the near future... so far I've counted six visits in six years.  Two weeks is not nearly enough to capture the essence that is Taiwan let alone experience the magnificence that is the city of Taipei.  From the (second) tallest building in the world to the most humblest of people, the Taiwanese have really contributed to a place worth visiting.  Au revoir for now, Taipei... I'm off to Seoul.  Until next time, let's all get S.O.F.A.T.