Post 38.2: Continue the Birthday with a Michelin-star Meal (LA: Hollywood)

So after the candy corn truffle pig helped Connie find all the tasty truffle treats, it was time to eat the truffles in prepared form.  Connie suggested Providence, which to me, was previously just a city in Rhode Island.  But I soon found out on Yelp that Providence was (and still is) a fine dining establishment awarded with two Michelin stars in 2009.  It was where we were about to get our birthday dinner.

On the tour earlier that morning, a few of the guests on my tour had visited Providence and suggested ordering either the 9-course full tasting or the four hour, 16-course chef's menu.  Hearing about the four hour, 16-course chef's menu delighted my heart but sunk my stomach.  I was just recovering from a stomach bug, and I was pretty sure that multiple courses of raw seafood (although my absolute favorite) paired with many glasses of wine (also a heart's delight) was not a good idea.

We didn't end up choosing any tasting menus, but we still had a splendid (I think that's the right word) dinner, welcomed by a very warm and charming captain Matt who accommodated us in every way possible.

Not everything is pictured, but here are the highlights: 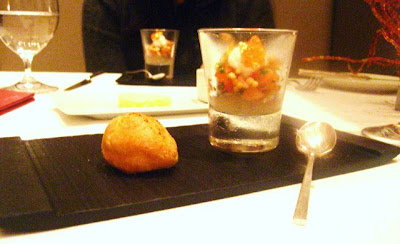 Dinner began with one bite into a savory bread smaller than a ping pong ball.  The gougere reminded me of a cream puff sans the filling.  It's traditionally made with Gruyere, and I'm sure there was a hint of a salty cheese in the light and airy bread, but I don't quite remember what it tasted like since my appetite trumped my memory at that point. 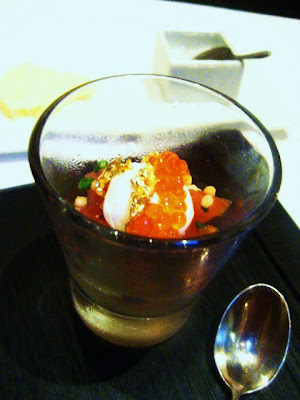 My second bite was also light but at a more profound depth of taste.  The cubes of salt cured trout provoked a comparison to sashimi and smoked salmon... it's less raw tasting than sashimi but more firm and lighter than lox.  The coolness of the creme fraiche cast a refreshing feel on the tongue and helped blend together the crunchy little rice crisps (bubu arare) and bursting trout roe, which was surprisingly not as salty as salmon roe (ikura).  Having a petite soup helped truly acknowledge the individual tastes of the shotglass-sized dish.  And it's an effective tool for pushing away the 24K gold flakes in order to save them for the final bite... 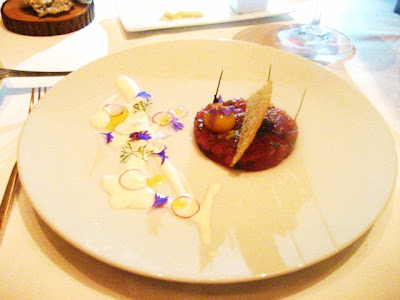 crispy nori rice crackers
I couldn't decide which appealed to me more... the fresh, perfectly circular round of deep, red tuna... or the intricate design of a... twig? a flower stem? a tree branch?... artistically painted onto the plate with an expanding sprawl of creme faiche.  Black on black in automobiles is elegant, but white on white in the culinary world is, as I just discovered, quite exquisite. 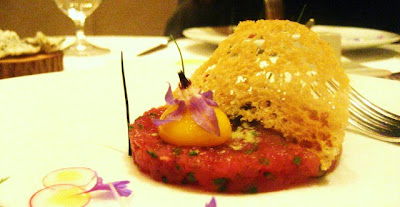 The popped quail egg yolk was just enough liquid bind to hold the tartare together on the coral-like fan of cheese crisp and the seaweed crackers made from rice (not pictured).  By the time I was through with the tartare, the plate looked as if it had never been touched.  Every bead of black caviar had been consumed... the edible purple flowers digested... and even the beautiful radish thins hidden away. 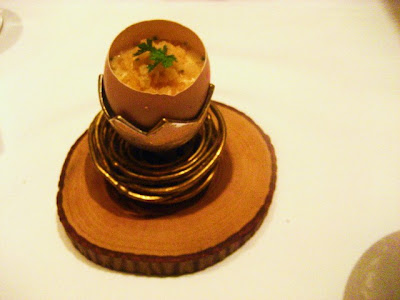 I wish I could tell just what exactly what was in this eggshell of delight, but I can't.  On the menu I could only recognize champagne and fines herbs.  My French extends to croissant and stops at Bourdeaux.  The Santa Barbara sea urchin is an exciting way to experience uni hidden under a dense fog of egg yolk, but I think I still prefer my uni cold and as raw as possible. 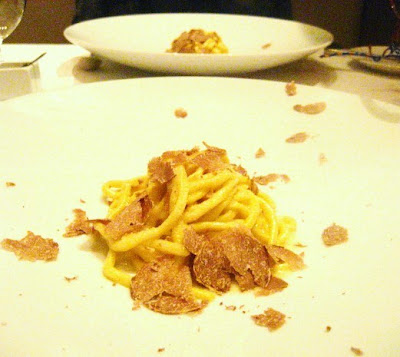 I noticed that the menu lists the truffle as the main attraction with the pasta as the accompaniment.  At first, I thought the logic was a tad strange, but when the dish arrived it was clear to me why the truffle is the main attraction.  Matt hand-shaved the Italian white truffle over the creamy, al dente updo of noodles and made the truffle fall like snow on Christmas in New York.  I had one eye on the weather and one eye on Connie who was about to die from seeing her love for this rare fungus fall from the heavens just inches from her face. 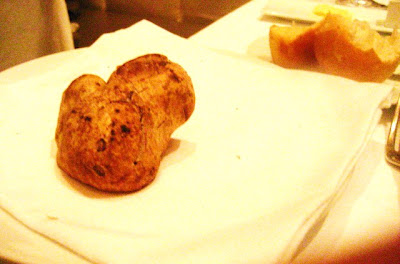 "Just throw the whole thing in there!"

A surprising outcry came from Connie's direction.  Shock.  Blushing.  Laughter.  As Matt gingerly placed the white truffle back into the mobile safe deposit box, he explained to us that the piece of truffle he had just shaved onto our plates was more than eight hundred dollars... remember to breathe, Connie... Matt was not about to throw that whole chunk of gold in the form of fungus in there.  No way. 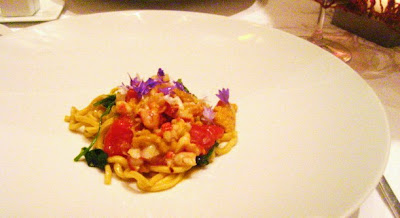 Bites of lobster as al dente as the pasta itself folded into a delicately sweet and sour subtlety helped ease me into a drunken stupor.  Did I mention the teardrops of fresh sea urchin resting on the sides of the pasta hill? Those could have been my own teardrops of happiness...

By this point in the meal, I had become satiated with culinary happiness.  There was nothing else I could put into my body that would elevate the level of enthusiasm that my drunken taste buds were experiencing.  But still I continued to twirl the wavy pasta noodles onto my spoon, lethargically scooping up the noodles with my fork ever so carefully.  Letting a strand of spaghetti fall off my fork was parallel to the scene in The Dark Knight when the Joker is dangling off the side of the building with his life literally in Batman's hands.

I wanted to let go because there was no point in pulling it back to safety... but it was so precious that letting go would be... for the lack of a better word... unfortunate. 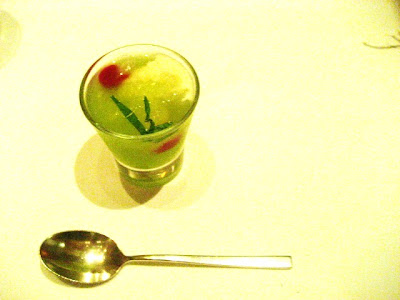 Good.  Refreshing.  Sweet.  The description reflects how much I cared for the melon soup by now.  The melon soup was awesome.  Really, it was.  But food coma was setting in at dinner, and my tongue, taste buds, and stomach were tired... and apathy is taking over as my body succumbs to the exhaustion from typing an epic length blog entry at the end of a day at the office. 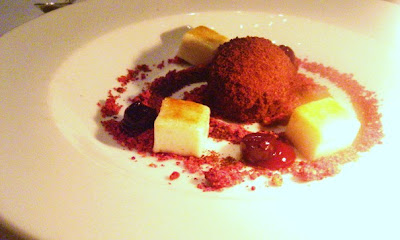 
Rooibus.  Another ingredient I'm not sure of.  (It's an herb native to Africa usually made into tea... thanks Matt.)  I still don't know what rooibus tastes like on its own, but chocolate and rooibus ice cream is delicious.  The brandied cherries were tart but sweet, and Matt ensured that the alcohol was burned off... but I secretly wish that it wasn't.  I could have done without the eggless creme brulee though.  It had a texture more similar to tofu or the soy version of creamy, dairy products.  Better yet... put the egg back into the brulee, and the dessert would be perfect.  We pressed on to finish the dessert... chocolate powder and all. 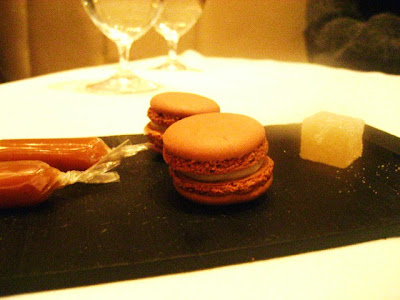 I liked the creativity of combining the spice and citrus of yuzu with the sweet and creamy caramel.  Connie didn't.  She liked the bite-sized chocolate macarons.  Eh, they were alright.  And neither of us liked the vanilla gelee.  It was dense, gelatinous, and encrusted with sugar like a gumdrop.

But it didn't matter anymore.  The good parts of the meal were great, and it more than tilted the balance in favor of deliciousness.  I'm disappointed that my stomach wasn't ready for some raw oysters and a 16-course epic adventure, but that just means one thing... I'll be back! An awesome start to the birthday season... Connie, thank you... I wish you 25 more years of happy eating! Until next time, let's all get S.O.F.A.T.