In the quest for insanely delicious doughnuts, we stopped at Lola, one of Tom Douglas' restaurants, at the end of our second night in Seattle.  But alas, the waitress informed us that the delightfully delicious doughnuts had been sold out.  She added, however, that the dainty delicacies would return in the morning... Of course, we returned. 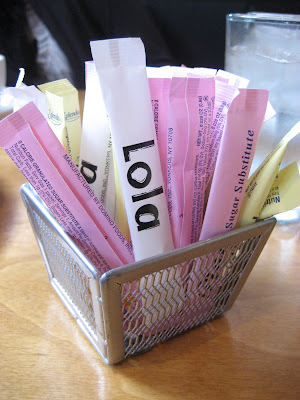 Sweet sucrose.
A bouquet of sugar packets bloom in the basket.
And of course, we ordered the doughnuts.  They were described to us more like beignets than just plain doughnuts.  But whether they were like beignets or like traditional doughnuts, we would order then anyway.  This really was Duke and Connie's mission... but I followed along.  I mean... how good could a donut be anyway? Well, I soon found the answer. 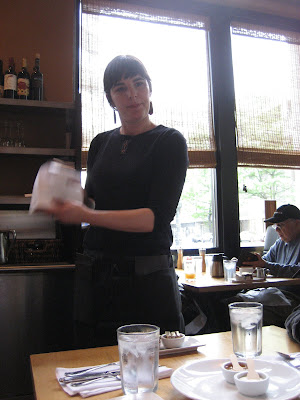 Shaken not stirred.
Heather, our server with a very warm personality, shakes the doughnuts in sugar tableside.
Oh, heavenly goodness.  I took one bite, and I thought angels had landed on earth.  It was light.  It was airy.  I'm not quite sure how they made them, but they sure as hell didn't taste fried.  And even if they were fried... no grease! These baby beignets were basic, bite-sized bliss. 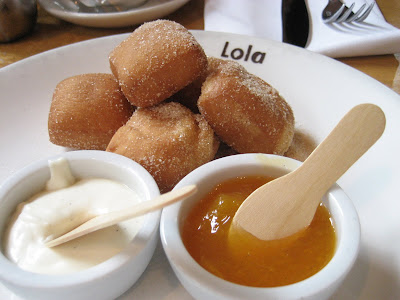 Baby beignets.
Vanilla bean mascarpone and apricot jam serve well as complements.
What made these doughnuts (do these even still qualify as doughnuts?) even better was the vanilla mascarpone. The apricot jam was quite amazing in its own right, but this mascarpone... this mascarpone was something else. Four doughnuts of the way through the plate, Connie and I found ourselves clear out of mascarpone cheese. Both of us turned our heads and eyed the remaining vanilla mascarpone on Duke and Diana's plate... it was pretty apparent that we had been the only ones that had been spooning globs of the mascarpone onto our doughnuts. I wanted to take a tub of this stuff back home with us. Impossible. 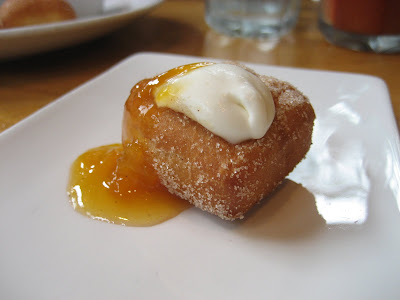 Tempting tastes.
I could hardly keep from drooling as I was taking the pictures of these babies.
I am about to make one of those grand statements that I hope I don't regret... these. are. the. best. damn. doughnuts. I. have. ever. had. EVER. No joke. EVER was bolded and italicized. That's nothing but emphasis, y'all. 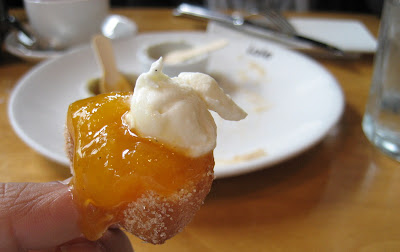 Bite-sized bliss.
It's hard not to moan, "Oh my goooood," after taking a bite.
This is the first time I have ever celebrated (or even acknowledged) National Doughnut Day.  After having the Top Pot doughnuts and these beautiful, baby beignets topped with vanilla mascarpone and apricot jam... it's safe to say that I'll be celebrating National Doughnut Day from here on out.  It was Lola, though, that really sucked me in.  Oh, Lola... I never thought... of all foods... it would be a doughnut that got me.

This concludes our side-step into doughnutdome, but the next post will continue our Memorial Day weekend journey through Seattle.  Until then... let's get S.O.F.A.T.