Today is National Doughnut Day.  I'm pausing the chronological posts of the Seattle trip.  Gasp.  I'm dedicating one entire post to donuts.  Double gasp.  Donuts aren't particularly a favorite food of mine, but twice we had doughnuts in Seattle... and twice they captured my heart. 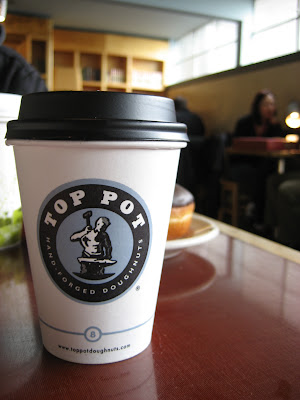 The house drip.
I'm not a big coffee drinker, but the smell lured me in.
We stopped by Top Pot on the way to the Space Needle.  (I saw the ad for this place in the Alaska Airlines magazine I was reading during the flight up.) 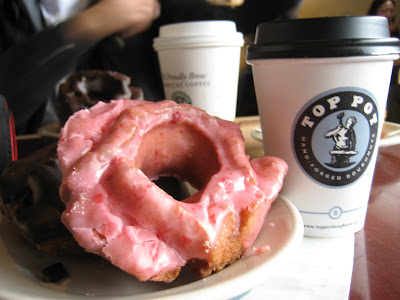 The raspberry old fashioned.  Bits of the berry dot the doughnutscape.
Upon entering I noticed that Top Pot was so... un-donut-shop-like.  Or... at least it wasn't like any donut shop I had ever walked into.  It was far from being similar to a Krispy Kreme store... no bright lights or large windows.  And it was definitely unlike the neighborhood donut shop with the flashing OPEN sign... you know, the one on the corner that occassionally makes sandwiches and sells Lotto tickets too? 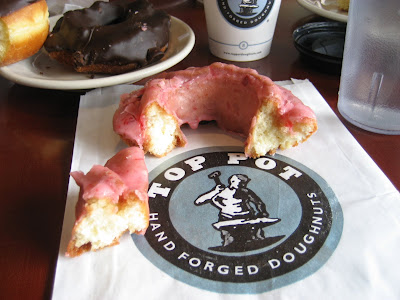 Hand forged doughnuts.  Hand eaten too.
I broke the doughnut into bite-sized pieces.  See the golden interior.
Top Pot was way different.  Upon entering I felt like I was walking into a local coffee shop.  The aroma of freshly brewed coffee was actually the strongest scent in the store.  The lights were dim... there was wooden furniture.  There was wooden furniture.  And an enormous bookshelf that spanned from floor to ceiling.  Oh, how I wished my future home library (dreams of future mansion) would be like that. 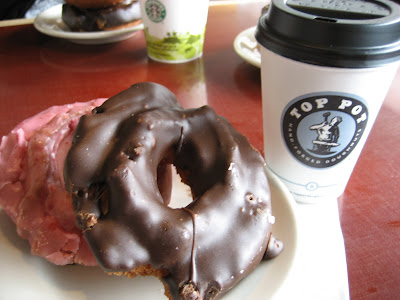 No cracks in the glaze.
Light from the window reflects off the thick chocolate shell.
So my first sights and smells indicated that I had just walked into a gourmet doughnut shop.  Yes... a doughnut shop, not a donut shop.  The extra effort they took in creating their delectable delights inspired me to put the extra effort in typing a few extra letters.  So what about the first taste? I spy...  something light, fluffy, and golden.
The Bavarian Creme Bismark in the distance.
Niiiice.  I love how the chocolate covering didn't just crack and fall off when I tried to break it in half.  The glaze stayed in tact; it clung to the dough tight.  I was impressed... and I was also full.  The center of these doughnuts were so dense that I could barely take another bite.  The coffee was probably aiding their expansion in my stomach. 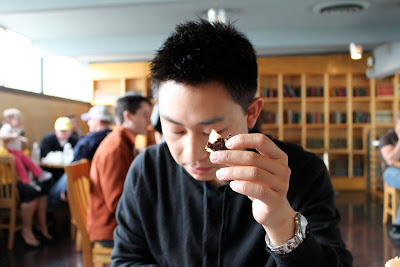 Take it away, please.  Stomach and mouth... both full.
Supposedly, the donuts are so addicting that the Seattle Seahawks Golden Tate broke into a Top Pot store in the middle of the night just to satisfy his craving for their maple bars.  I wish I had known this earlier... I would have ordered the maple bars! Top Pot quickly turned the event into a marketing campaign.

I wish I could try them all.  But I was donezo... it was time for the Space Needle.  Part 2 of National Doughnut Day still to come!