While working at Miller I never actually got around to having a "nice" meal for lunch.  What would I call a 'nice' meal? Well, for starters, it definitely wouldn't be the leftovers (typically meat and vegetables over rice) that I re-heat in a microwave three to four times a week (sometimes five) at the office lunch room.  It definitely wouldn't be McDonald's... or any fast food... or any of the food court options across the street at the mall (Promenade, not Topanga).  A "nice" meal would be a meal that I could eat without feeling pressure from the professional time constraints of society.  In other words... I'd be able to eat without the constant reminder than my lunch break was just 30 minutes. 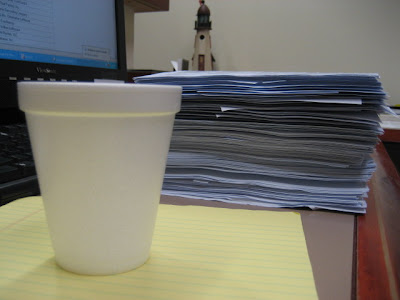 The enemy.  A mountain of tax returns.
So absolutely fed up with getting paper cuts from assembling tax returns, I decided to go somewhere where I could hold a cloth napkin rather than a Band-Aid.  How convenient... Kate Mantilini was right downstairs. 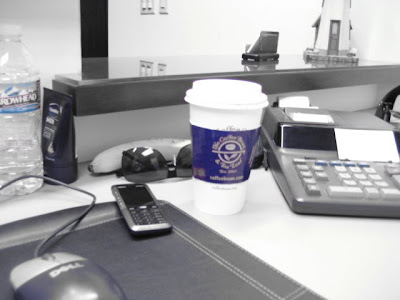 Gloomy, no? Coffee was my only pick-me-up.
Now I don't think anyone would ever call Kate Mantilini a swanky place, but it's definitely one of those places that the boss would put on his expense account (having handled a few expenses accounts while interning at... ahem.  I digress.)
Kate Mantilini.  Simple meals, done well.  Nice.
I wanted to eat something with a spoon... and when I was done eating whatever I was eating with a spoon, I could use the spoon to dig myself out from under the millions of tax returns I was preparing.  Oh, and then I could replace my index finger with this versatile spoon so that I wouldn't get anymore paper cuts! (What a genius plan I had.) 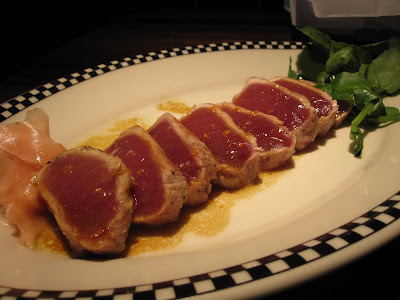 Successfully seared.
There were eight gorgeous pieces of radiantly red fish.
When the ahi had arrived, I completely ignored the tortilla soup as if it had never been there.  Kate seemed to have seared the outside of the ahi for an extra length of time.  And although that's less raw tuna to eat, it also helped provide color contrast to the portion of the raw tuna.  The ruby red flesh really stood out next to the tan seared portion.  They almost looked like gemstones, glimmering against a backdrop of white and tan... and almost too good to eat.  Almost. 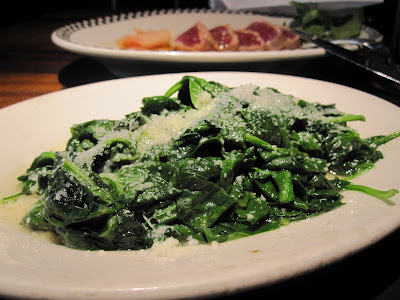 Simple saute.
Popeye would have traded his can for this for damned sure.
If you can call spinach elegant, this would be some elegant spinach.  Other than Din Tai Fung, there are very few establishments that can saute a vegetable so delicately that the vegetable still retains its original shape, color, and taste.  Kate did just that.  There was not a single overcooked leaf... nothing brown.  Every bite still crunched with a soft vigor... every fork full was green like the spinach was still alive.  It was like melting into a spoonful of Haagen Dazs vanilla ice cream.  There's nothing on the spoon but single-flavor ice cream, but it's just so damned good.
How time flew! My simple meal took... 90 minutes?! My lunch hour was definitely over.  But thank you, Kate, for taking my mind off of those 1040s.  Until next time, let's get S.O.F.A.T.