Shabu-Shabu House in Little Tokyo is somewhat of a spectacle.  There always seems to be a mass of hungry shabu-shabuers gathered by the storefront.  These hungry shabu-shabuers wait ever-so-patiently for the chance to swish-swish tender slices of beef in their personal Japanese savory fondue hot pot. 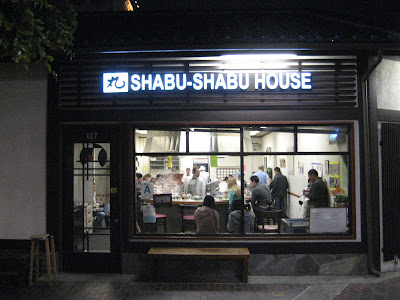 The house that beef built.
One horseshoe-shaped counter serves all guests.
For those who are lucky enough (or tall enough) to peer over the heads of the waiting customers, the large, transparent window offers a glimpse of what's inside the shabu-shabu-ya... tender beef being sliced to order on a professional meat cutter.  Slice after slice, fresh beef folds ever-so-gently into the palms of a waiting hand.  Now that is the spectacle, and that is the reason why people wait outside en masse. 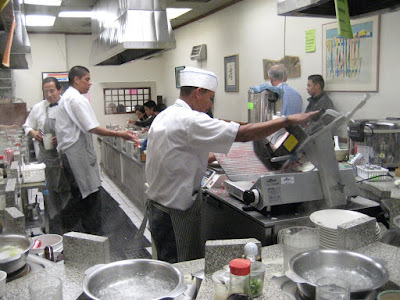 Sliced to order.
In ten swift motions of the blade, fresh beef awaits impending doom.
If it's the beef that keeps people waiting outside, it's also the beef that keeps people sitting inside.  The marbling throughout the thinly sliced pink tenderness simply called beef ensures that the meat will taste soft and tender.  The right amount of swishing in the pot takes only a few seconds.  As soon as the pink diminishes, the meat is ready to be snatched up and eaten. 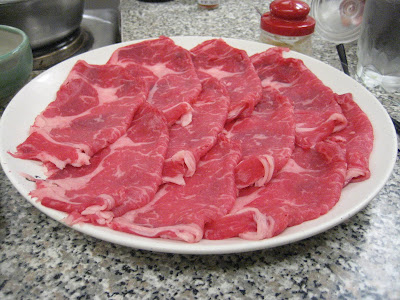 Marble on marble.
The more marbling a slice of meat has the higher its fat content.
Japanese food experts claim that the best Japanese restaurants are ones that do not require patrons to flip or turn the page of the menu... the simpler the menu, the better the quality of food.  Well, that's good to know because the menu at Shabu-Shabu House is written on a chalkboard.  Choice A offers 10 slices of beef, and choice B offers 15 slices of beef.  It can't get any simpler than that. 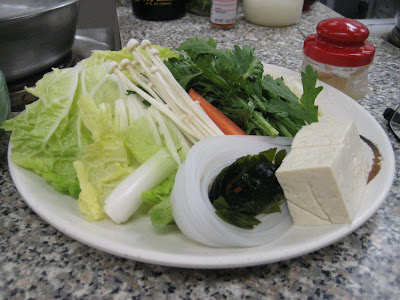 The frou-frou platter.
Tofu, fresh vegetables and udon noodles are traditional accompaniments.
While admiring my pot of boiling denatured beef enzymes, I noticed the shabu-shabuer sitting to my left.  Before she had even begun to place vegetables in the water, she had doused the boiling base with shoyu (soy sauce) and unnecessarily drenched the uncooked beef with oil.  That, ladies and gentlemen, is lesson one in 'How Not to Shabu-Shabu.' 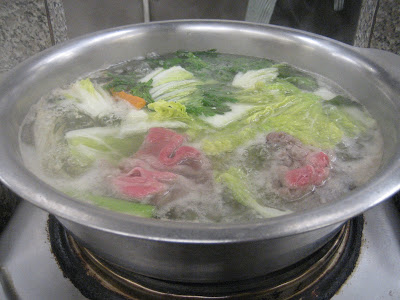 A quick swish.
The roaring boil of the water cooks the meat within seconds.
While the base of Chinese hot pot may be made from the simplest of chicken stocks to the spiciest of Szechwan peppercorns, the Japanese shabu base is just water and one enchanted piece of seaweed.  The base is pure because it is the all-important beef that is meant to be tasted.  The base that later encapsulates the enzymatic remnants of the beef is not meant for consumption.  Taste the beef, not the soy sauce.  Seeing the Kikkoman pollute the shabu pot was like seeing thick, black smoke engulf a burning house.  Eek. 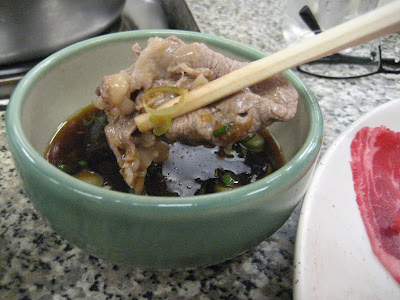 The pool of ponzu.
Soy sauce may overpower the natural beef flavor.  Ponzu works better.
So how exactly does one shabu? It's simple! When the water comes to a boil, add vegetables, not soy sauce.  When the base comes back to a boiling degree, swish, swish, swish the meat around until the pink fades.  Do not add soy sauce.  Season the ponzu sauce and the peanut sauce with garlic, green onions, and fragrant oil to your liking.  Do not add soy sauce.  (Alright, maybe just a little bit if you really need a bit of that saltiness... but it's the Shabu-Shabu House not the Shoyu-Shoyu house.) Dip the slice of beef in your preferred sauce (ponzu or peanut)... and savor all beef in all its glory.  Repeat 9 or 14 more times to fulfill satisfaction.  Not too hard, right? 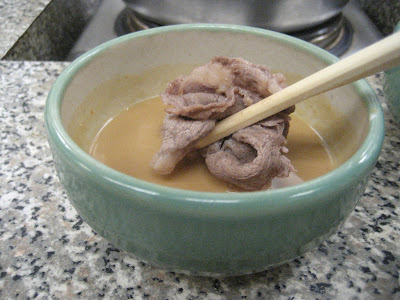 Paired with peanut.
The sauce is like a tangy liquid peanut butter and goes great with the beef.
Lesson one... keep the beef tender.  Lesson two... don't ruin the soup base! Lesson three... class dismissed! Until next time, let's all get S.O.F.A.T.