On my last romp through Koreatown up and down Vermont (filled to the brim with Beverly Soon Tofu), Rose pointed Moo Dae Po out to me and mentioned that it was one of the better Korean barbeque places in LA.  That mere statement jump-started my salivary glands and kicked my anxious nerves into overdrive.  The shakes.  I got the shakes.  I had to have a taste of some grilled meats at Moo Dae Po. 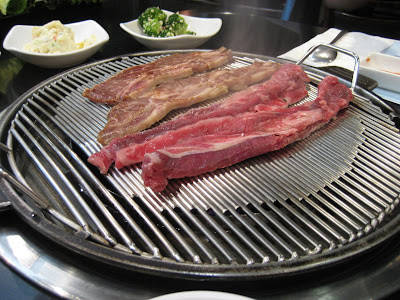 Joe was in town for a business project recently, and he got a craving for all-you-can-eat KBBQ. (I wasn't the one with the Korean food craving... what a shocker.) So to Moo Dae Po we went.  I was starving like mad... partly because it was dinner time and partly because I was put through some very intense reverse crunches (which I haven't done since this first time) at the gym earlier in the day.  Perfect time for KBBQ! 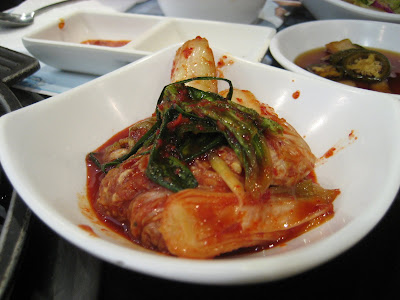 Okay, so official announcement: I fell in love at Moo Dae Po... with the kimchi.  At first, it looked like any ordinary restaurant kimchi... but after one bite, I knew this kimchi was different.  The gleaming red chili sauce retained a strong oyster essence.  It was almost as if the oysters had just been pulled out of the kimchi jar.  (Korean culinary conoisseurs tell me that the essence of oyster is a sign of authentic kimchi.)  The cabbage leaves made me fall even deeper in love with the kimchi.  The leaves were whole and in tact... far from being bite-sized, which means each bite of the kimchi made me feel like I was folding oceanwaves in my mouth.  This kimchi was the one.  It was love at first bite. 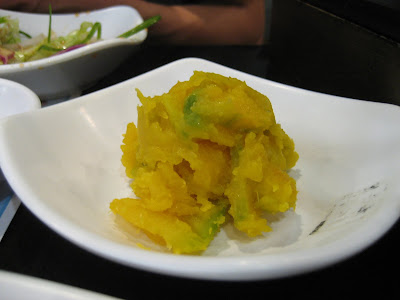 Completely enamored with the kimchi, I had almost forgotten about the rest of the banchan.  In stark contrast to the spiciness of the kimchi was this glowing yellow ball of yam mashed potato.  Although it looked like a sulfuric meteor of minute proportions that Venus perhaps tossed over to Earth, the taste was far from poisonous.  This mashed yam ball captured an unexpected sweet taste with a hint of ginger.  (This might be something I want to try making at home.)  I just couldn't get over its sulfuric look. 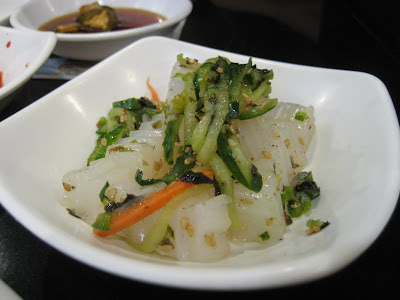 Another favorite is this gonyak (CN: konjac, JP: konnyaku) salad with bits of sesame and shredded cucumber.  The rest of the banchan were pretty typical of Korean restaurants (bean sprouts and the like), but this gonyak salad captured my attention because it was prepared differently from the gonyak I've had at other restaurants.  This dish provided another contrasting flavor and texture to the kimchi and mashed yam.  It was so light and refreshing and almost acted as a neutral palate cleanser in between the meats and heavier flavors. 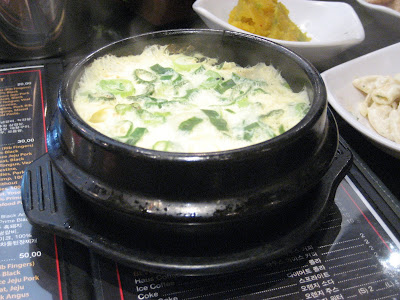 While the grilled meats and spicy kimchi were more savage to the taste, the steamed egg was more mild and comforting.  (I think I've found a new favorite dish to eat with a spoon.)  Watching the amount of steam rising from the stone pot was like watching love evaporate into the air.  (Did I just compare steam to love? I think I've officially gone crazy.)  Maybe it stems from my childhood, but whenever my parents, aunts, or Ah Ma made me a big bowl of chawanmushi, the warmth of the steam made me feel loved.  I can see my married life now... my wife says, "I love you," and I reply with, "here, honey, have some steamed egg." (Potential miscommunication and slap in the face? Boy, I hope my future wife reads this post...) 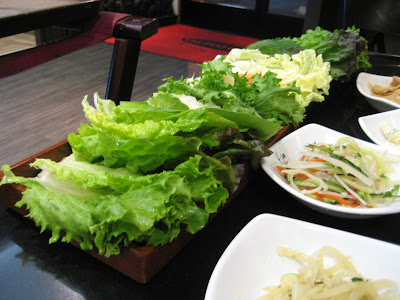 By the end of the full-fledged consumption of steamed egg, the meats and lettuce (no rice paper here!) had arrived.  The server placed a garden of lettuces before us.  Hidden amongst the romaine and the butter leaves were a few sesame seed leaves (shiso).  Shiso is so ridiculously aromatic and fragrant.  The smell of shiso casts a spell on me the same way that jasmine, lavender, or freshly brewed coffee mesmerizes others.  Mmmmm... 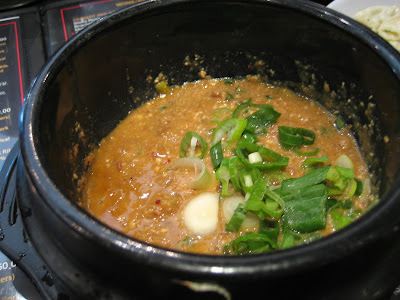 As I began to create my lettuce wrap, I dropped a large spoonful of the fermented bean paste onto my lettuce to hold everything in place.  (Has anyone noticed that Taco Bell smears a bit of refried beans on the wax paper wrapper to hold the taco in place?) The bean paste is chock full of garlic, green onions, and red chilies, and it has a strong, pungent smell.  Funny how a simple, fermented soybean can create this pungent paste and oh-so-tantalizing taste. 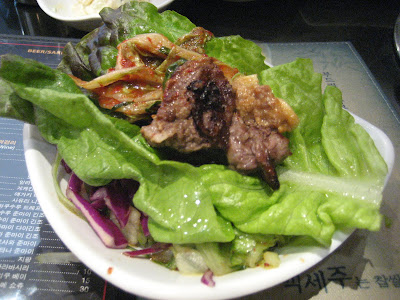 After a plop of the bean paste, I dropped two cubes of beef onto the mat of kimchi.  The beef looked like it was chillin' in a lettuce hammock.  Too bad I was about to tear it apart with my teeth.  Muahahaha... good food brings out the predator in me. 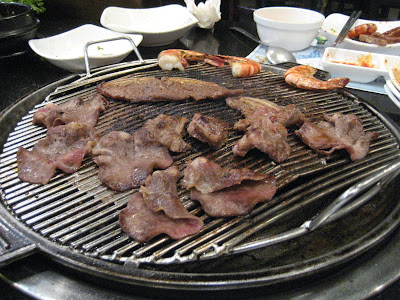 I was so busy building wraps and engrossed in conversing about how wonderful the kimchi was that I failed to take more pictures of the meat.  Super fail.  Buuutt... the Cheju pork belly is awesome; the beef tongue is tender; and the shrimp is fresh and flavorful from the olive oil marinade.  And if you're up for a bit of excitement, order the baby octopus and you can watch their bodies burst when the grill gets super hot.  (I recently came back with oolong-milktea and co. after a 10K race, and the bursting baby octopi were definitely a source of amusement.)  Oh, but the best part? They're quite delicious too.  Until next time, let's all get S.O.F.A.T.