Now that I have been spending more time in the Orange County area, I have been able to wander around and discover some new food findings, the first of which is located right under my nose.  Okay, so 'right under my nose' isn't quite the exact GPS location, but this discovery did occur in the same plaza where the office is located... so it's really not that far from whatever is under my nose.
Pepito's Mexican Restaurant is not quite El Torito, not quite King Taco, but not quite El Pollo Loco either.  It's more like the kitchen and dining patio of your best friend's, little sister's, boyfriend's abuelita... just an open kitchen with counters made of tile, a cross between a restaurant and a café that serves authentic Mexican fare to locals.  It is not the kind of place that foodies would deliberately search and try, but it definitely is the kind of joint that gets the unsuspecting hungry coming back as regulars.  Pepito's is not a chain... it doesn't even have its own website.  But what it does have is an expansive menu complete with breakfast burritos and enchiladas... there are daily specials, Taco Tuesdays, a friendly staff with easily recognizable faces, cold cerveza, a fresh salsa bar, and holy hell... there are potato tacos. 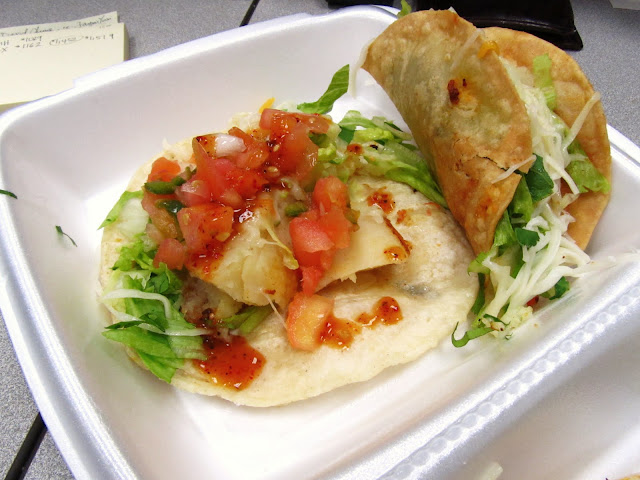 So what is this infatuation I have with these newly discovered potato tacos? Well, you'd never know until you try.  I have come to love potato tacos because they are the most indulgent kind of tacos there are.  I mean... you can never go wrong with the house asada or the pastor that's made just right, but there's no amount of meat and tortilla that will make you feel like you're truly guilty.  If you polish off a 32 oz. rib eye with a side of mashed potatoes... you're a bad ass.  But if you polish off just two or three crispy shell potato tacos... hey, you're just bad. 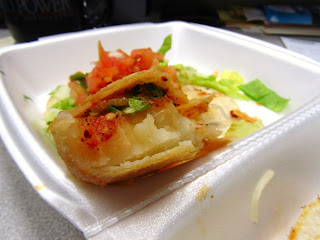 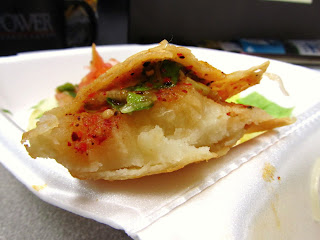 The root of your guilt stems from the potato itself.  Commonly made into French fries, tater tots, and bacon topped skins, it's not really thought of as the healthiest of vegetables.  Even though they are full of fiber, you know that it wasn't quite what your mom was referring to when she said, "eat your vegetables."  Whether or not you think potatoes are vegetables or corn tortillas are actually part of the vegetable food group, the lack of a true leafy green or a browned protein in your taco connotes a message that your meal is lacking some sort of nutrient. 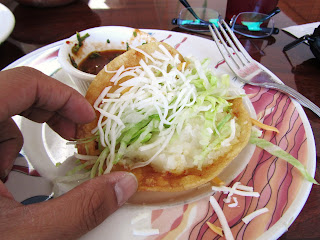 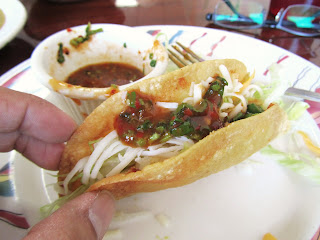 No matter.  Guilt is guilt.  If you get a chance to indulge in a crispy shell filled with a fluffy white vegetable more commonly thought of as carbs, then please don't let anything stop you.  You haven't lived until you've bitten into this ingenious invention.  It's one part grilled hash brown, a second part velvety mashed potato, and another part steamy baked potato... all wrapped within a crispy tortilla and doused with whatever salsa your heart desires.  (Not into spicy? Pepito's makes a Gringo salsa for the japaleño adverse.)  Oh, and did I mention the shredded cheese that comes on top? If you order the tacos for takeout, the cheese will melt in the container by the time you reach your destination (across the office plaza).  Ahhh... delicious, heavenly guilt.

Hola, Naranja.  Thanks for introducing Pepito's potato tacos.  I have a feeling Orange will be good to me.  Until the next carb-filled discovery, let's all get S.O.F.A.T.