During my visit to San Francisco over the summer, a friend introduced me to Yummy Yummy, a Chinese style Vietnamese restaurant in the Sunset District.  Right next door to Yummy Yummy is San Tung Chinese Restaurant, a restaurant that is known for its dumplings, black bean sauce noodles, and fried chicken wings.  Some of the items such as the black bean sauce noodles are prepared in a Korean style, which makes me think that the owners are ethnically Chinese but born and raised in Korea.  But I never got a chance to ask.

Naturally, my style of culinary exploration required that I order all the well-known items on the menu.  And when I asked the server what else is good at the restaurant, he replied, "Nore more! You got 'em all."

With the help of Pei, Joanna, Larry and Jon, we ordered just a few more dishes.  Just a few. 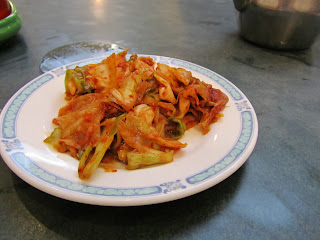 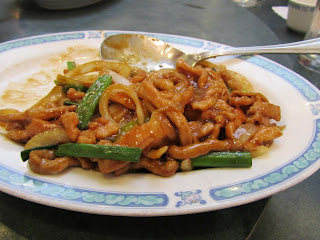 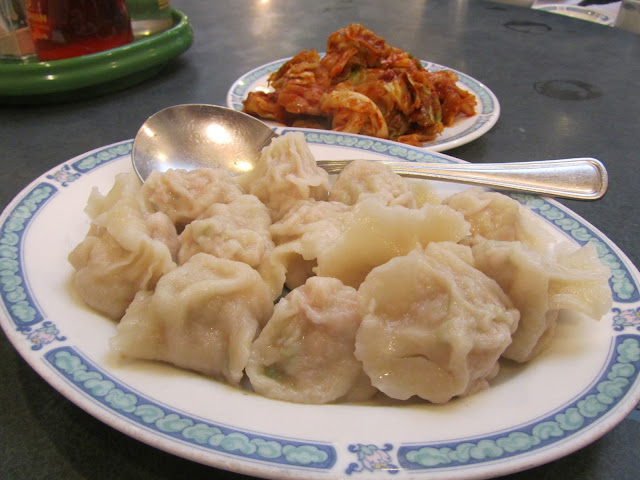 Complementary kimchi
San Tung's kimchi is drier in that it's not submerged in a bright red pool the way that authentic Korean kimchi is.  From my numerous visits to Korean style Chinese restaurants, I've noticed that the dryness is a characteristic of kimchi made by the ethnically Chinese from Korea.  However, dry doesn't necessarily mean bland.  The kimchi has tons of kick and spice, which helps break the monotony of flavor from the black bean sauce noodles.

Pork with green onions
It's a seemingly simple dish that is actually quite complex in flavors.  It's savory from the sliced pork, sweet from the garlic and soy combination, and salty from the onions (both green and white).  Like the kimchi the wok-fired white onions provide a bite that gets addicting.  I only wish I had a bowl of rice to go with this dish.  That the rice and pork would pair well is a complete understatement.

Pork dumplings
These little fists are filled with ground pork and shredded Napa cabbage, and once dipped into some soy sauce, vinegar, and chili oil, they pack a powerful punch of savory bliss.  I like that the skin is not too thick and not too thin.  I felt like I was eating a meatball wrapped with dumpling skin rather than just simply eating dumplings.  The shrimp and leek dumplings are popular here too. 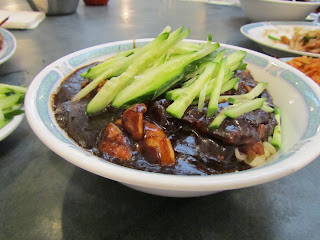 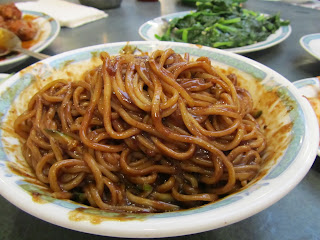 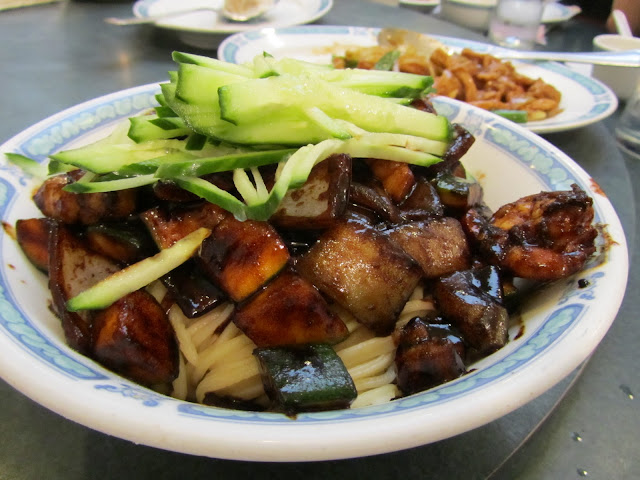 Black bean sauce noodles
I noticed that there were two black bean sauce noodles on the menu... one was listed as dry and the other was supposedly... wet? I asked the server what the difference was between the two, and he responded, "one dollar."  Okay... funny guy.  So after clarifying that monetary value was not the answer I was looking for, the server let us know that both noodles include shrimp and calamari, but the dry noodles contain scallops, and the supposed wet noodles are made with beef and a creamier sauce.  If there's an Asian version of an alfredo sauce, this is it.  Black, Asian, alfredo.  Oxymoronic? Perhaps... but it tastes good.

The group voted 4-1 in favor of the dry noodles over the wet noodles.  But I think that the beef infuses more flavor into the wet noodles, and the creamier sauce just can't be beat.  Tip from the server: mix, mix, mix until the noodles are all black... no, not yet... keep mixing! 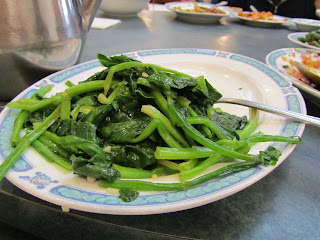 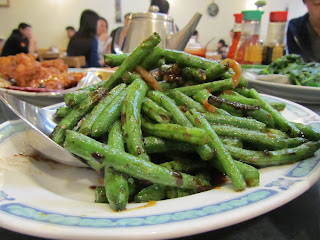 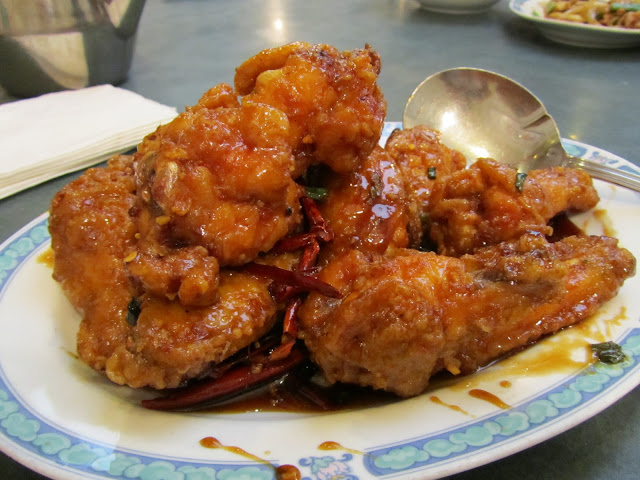 Spinach with garlic
The simply sauteed spinach with surprisingly lengthy stems helped diversify the color of the dishes on the table... and of course it provided a healthy dose of fiber for the digestive system as well.  The larger bits of garlic dotted throughout the forest of spinach was a pleasant reminder that the garlic was most likely diced by a chef wielding a large Chinese butcher knife and not spooned in from a jar of machine-minced garlic.  No shortcuts here.  The taste makes that evident.


Dried sauteed string beans
Is this the place to get the best string beans? Eh, maybe not.  But it is a decent place to get some crunchy greens.  The flavor is a bit shallow... on the surface level.  But either a hefty helping of salt and pepper or adding ground pork to the stir-fry just might amp the flavor up just a tad.  But otherwise, you can't go wrong with a side of these veggies.


Original dry fried chicken wings
Salty, sweet, spicy, sticky, crispy, crunchy, burning hot, heartburn-inducing... ahhh... all the components of a delicious chicken wing.  From what I remember, Yummy Yummy next door has a version of the fried chicken wing as well, but the wings here seem a bit more established... less saucy, more sticky.  The ratio of chili pepper seeds to dripping honey seems to have been perfected.  These wings indicate that they have been the veteran on the block for years.  Now if only my hot tea were a Tsingtao and if the restaurant chair were a backyard hammock... oh, how happy I'd be.  I'd lap up plate after plate of chicken wings, toss the bones to the grass below, get lost in the clouds and wonder how the hell the honey gets cleaned off the plates.  Shrug... smile.

So after all these dry, not dry, and wet descriptions in the names of the dishes at San Tung, I think I've finally figured it out what they all mean.  Dry doesn't mean dry... the dish still has a decent amount of sauce.  However, dry means that it's dry compared to the wet version of the dish, which apparently indicates a substantial amount of sauce.

Still confused? No worries, just eat.  Perhaps that's the same ideology that so many locals have adopted because many make return visits on a consistent basis.  The locals know where the good, authentic Chinese food is, and I'll give you a hint... it's not in Chinatown.