Quick fry stores are Taiwan's way of combining the restaurant and bar.  It is a blend of food and drink that fuses together so many styles of eating that it is not easy to describe the kind of venue that it is.  While it is frequented after work as a venue for a combined happy hour and dinner, it really brings together aspects of Chinese dim sum, Japanese izakaya, Spanish tapas, and American happy hour all under the same roof.  Dishes can range from grilled meat on sticks, both raw and cooked seafood, deep fried pub food, and the ever popular Chinese style stir fry presented on small plates.  All of the food is meant to be consumed with beer or wine.  Art, Diana, and I dropped in to Saute Restaurant (33區 熱炒生猛海鮮) to get our grub and guzzle on. 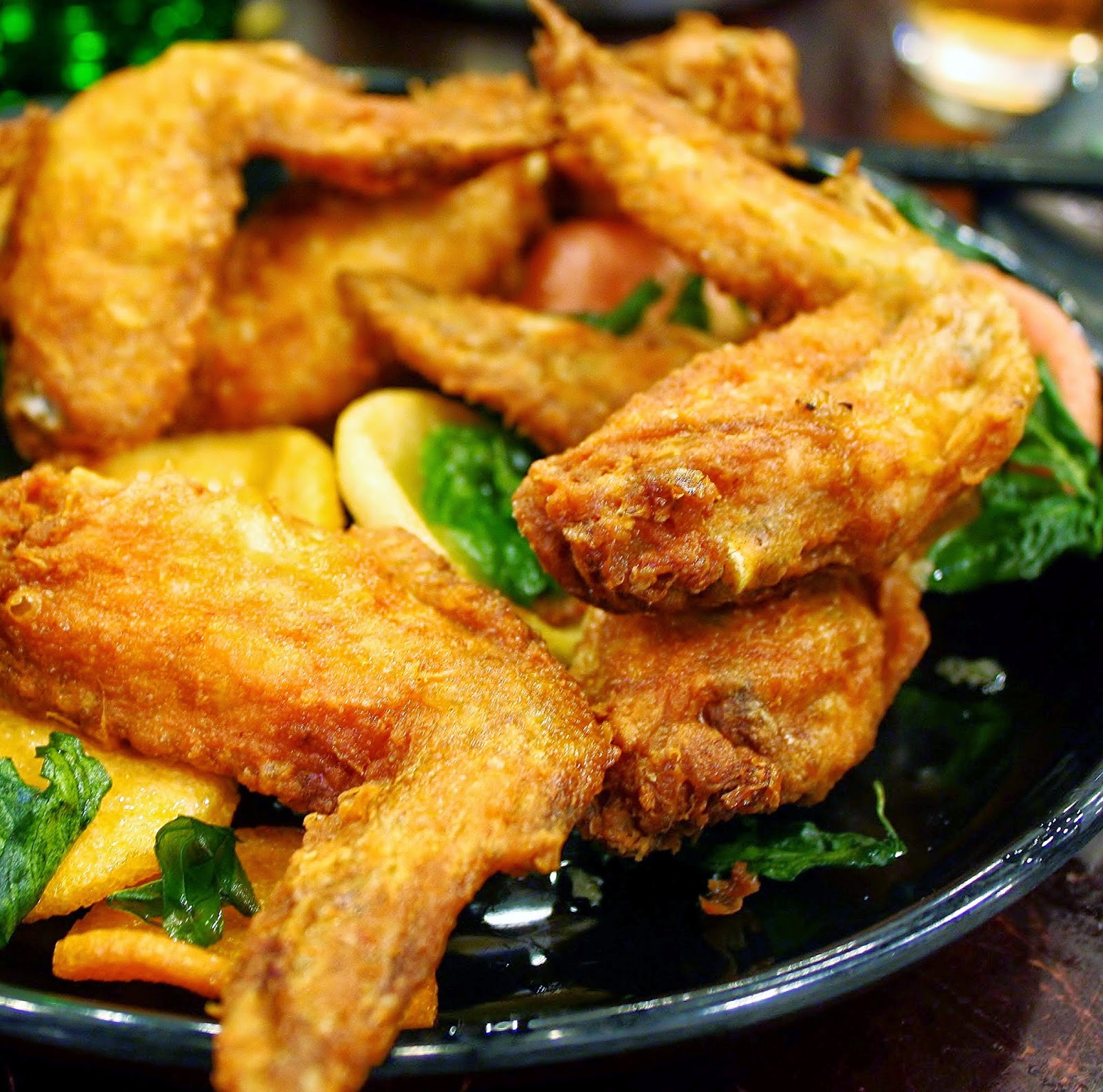 What goes better with beer than fried chicken wings (南乳炸雞翅)? It's almost obligatory.  Thin and crisp skin on the outside with juicy meat on the inside make for an irresistible starting snack. 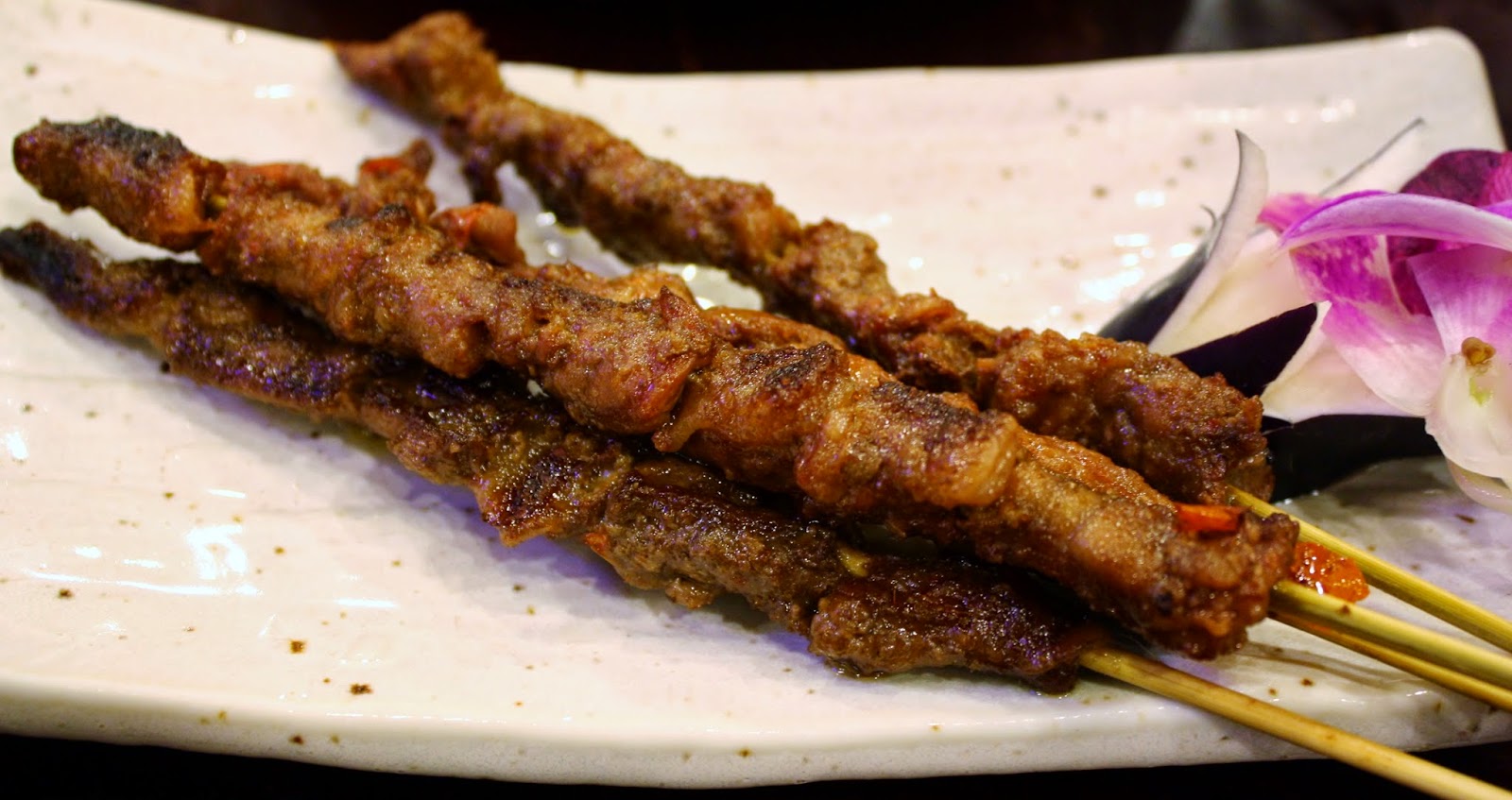 Food on a stick is just about as good as anything deep fried when it comes to pairing food with beer.  These cumin lamb skewers (孜然羊肉串) really hit the spot.  They were well seasoned from tip to tail with an earthy spice that begged for a chasing of beer. 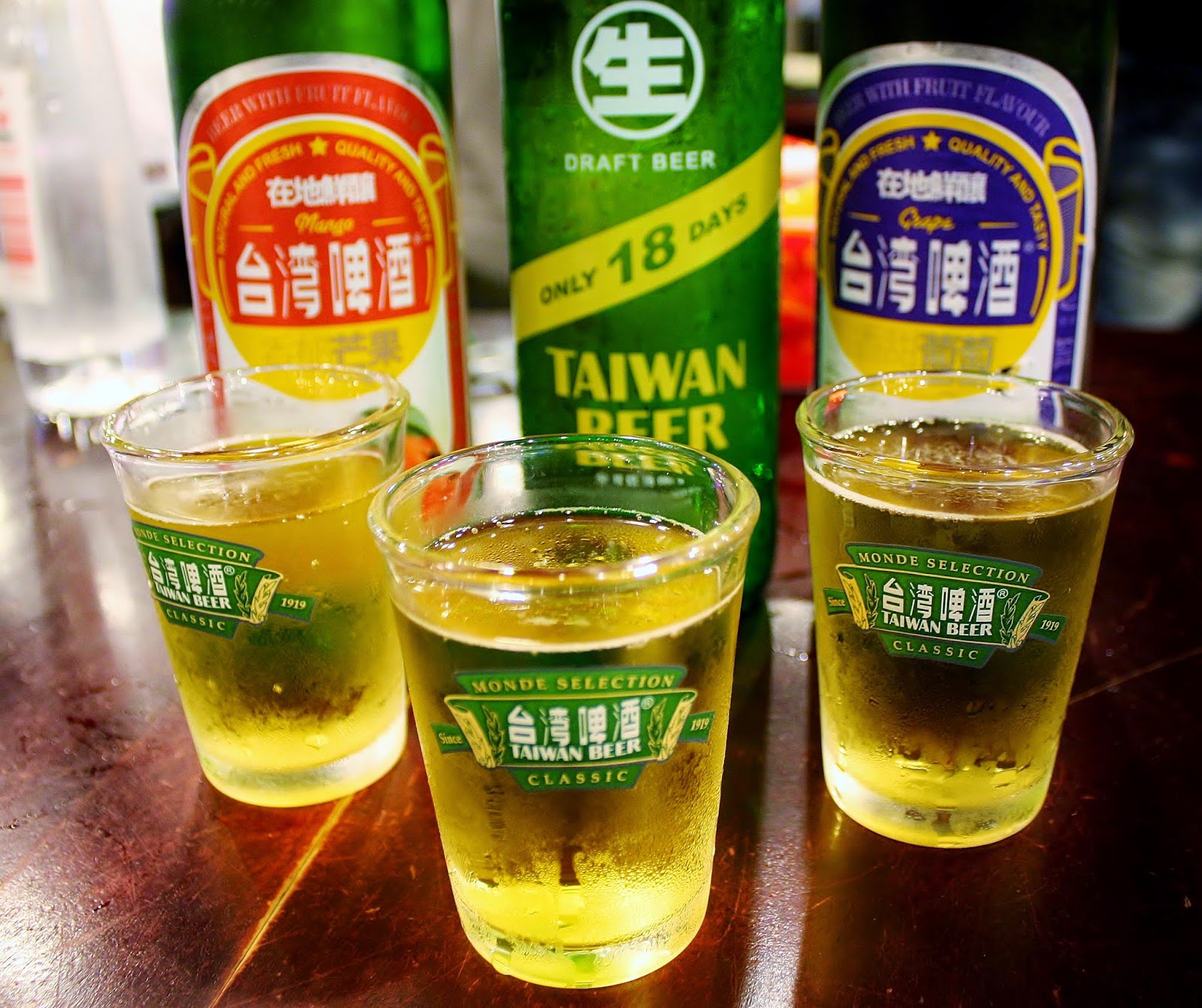 Speaking of beer, the three of us were having Taiwan Beer (台湾啤酒).  The national namesake has a special taste as it incorporates the locally grown Formosa rice (蓬萊米) into its brew, adding a subtle hint of sweetness and making it very drinkable.  Taiwan Beer comes in many varieties.  Art and Diana tested out the new mango and grape flavors; they are sweeter and have less alcohol content.  I stuck with the draft version.  Its short 18 day shelf life keeps it fresh. 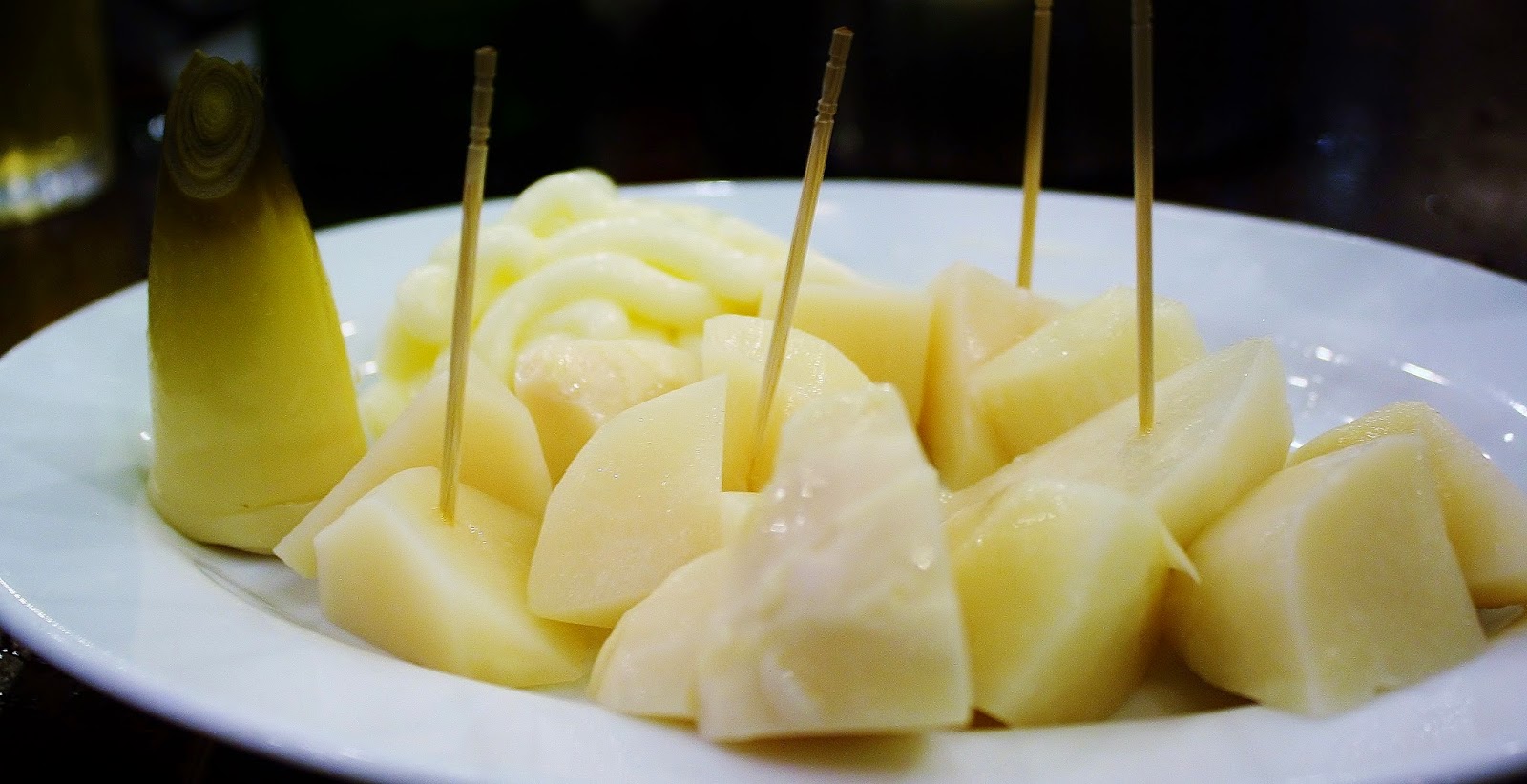 I have had so much chilled bamboo (鮮竹筍) on the trip already that you would think I have exhausted my taste for it, but this panda food has got such a cleansing mouth feel that it is tough to avoid.  It works as a great palate cleanser between the greasy appetizers and the forthcoming courses. 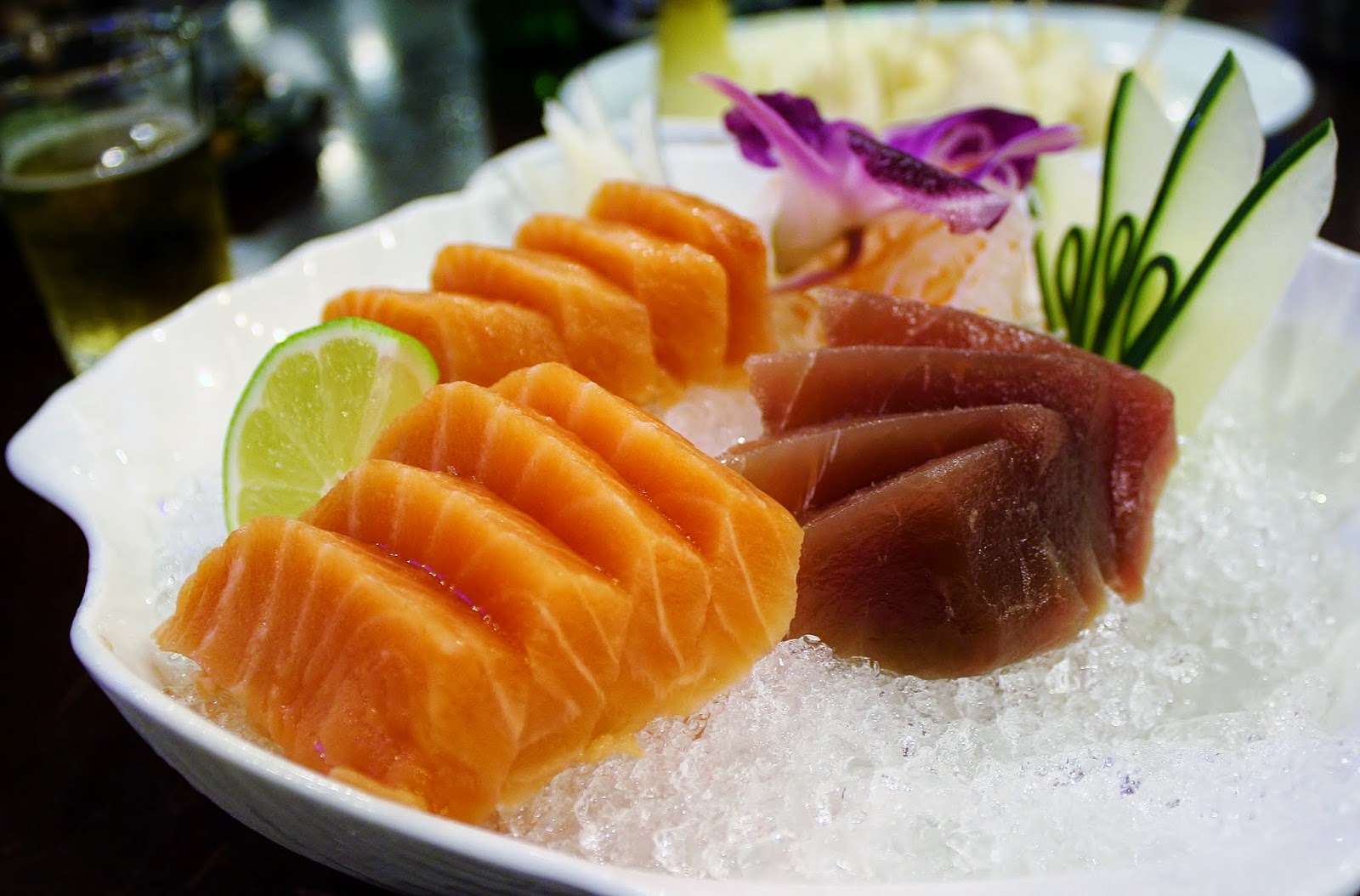 Being from an island nation that was formerly a Japanese colony, the Taiwanese are big fans of fresh seafood, and nothing is fresher than fish recently hauled in from the Pacific.  We actually saw the restaurant staff haul in a massive tuna fish into the restaurant while we were eating, so we had no choice but to order the tuna sashimi (鮪魚刺身).  We also ordered the salmon sashimi (鮭魚刺身) for good measure. 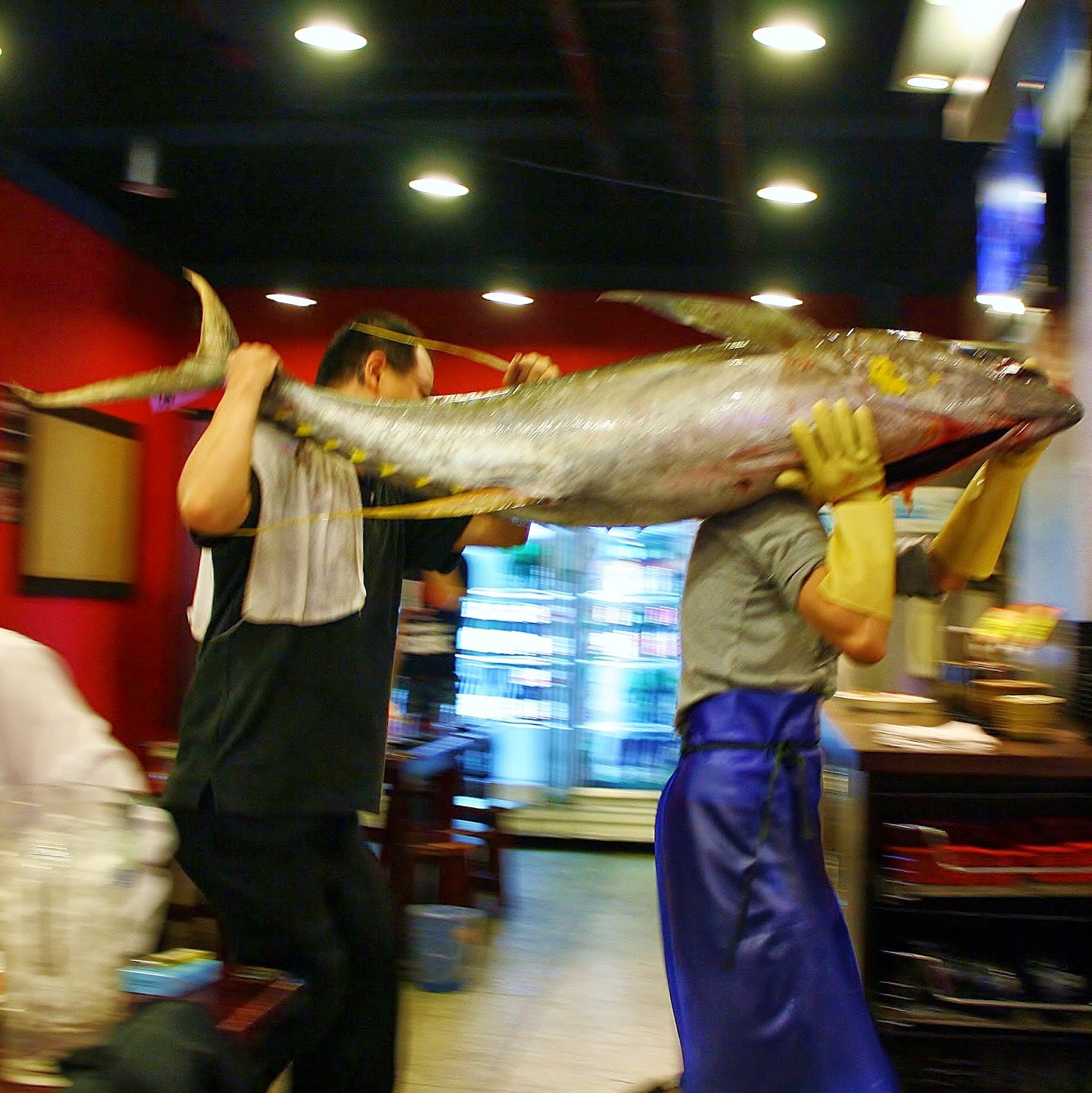 This happened in the middle of our meal... pretty neat.  It is always good to see restaurants using the freshest ingredients for their customers.  That was one massive monster of a maguro. 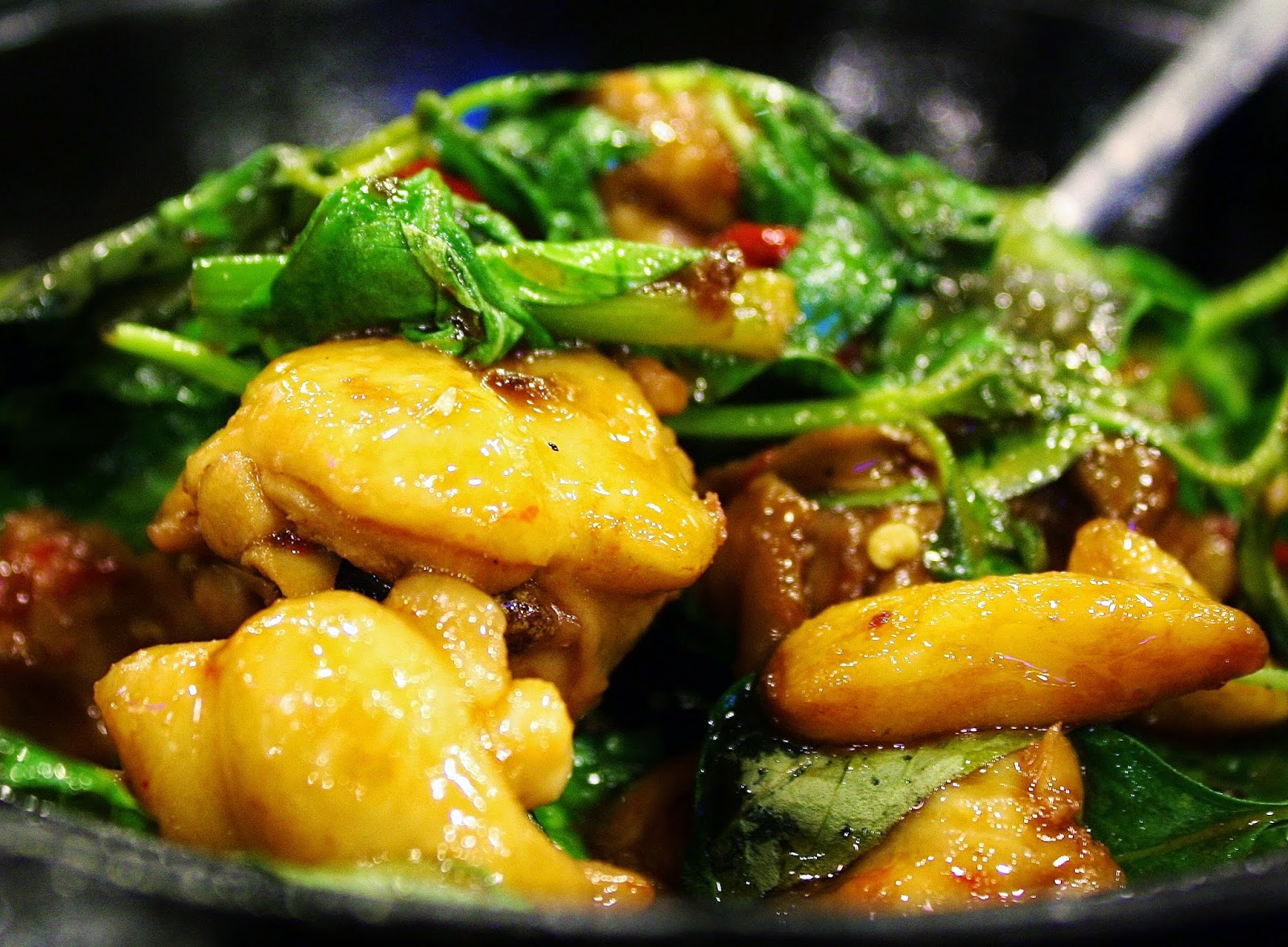 A favorite of any Taiwanese establishment, whether restaurant or bar, is three cup chicken (三杯雞腿).  33區 uses thigh and leg meat only in their preparation.  The result is an undeniably juicy soy and wine infused chicken.  The abundant use of garlic, ginger, and fresh basil is simply mouth watering.  Great with rice, great with beer... just so good. 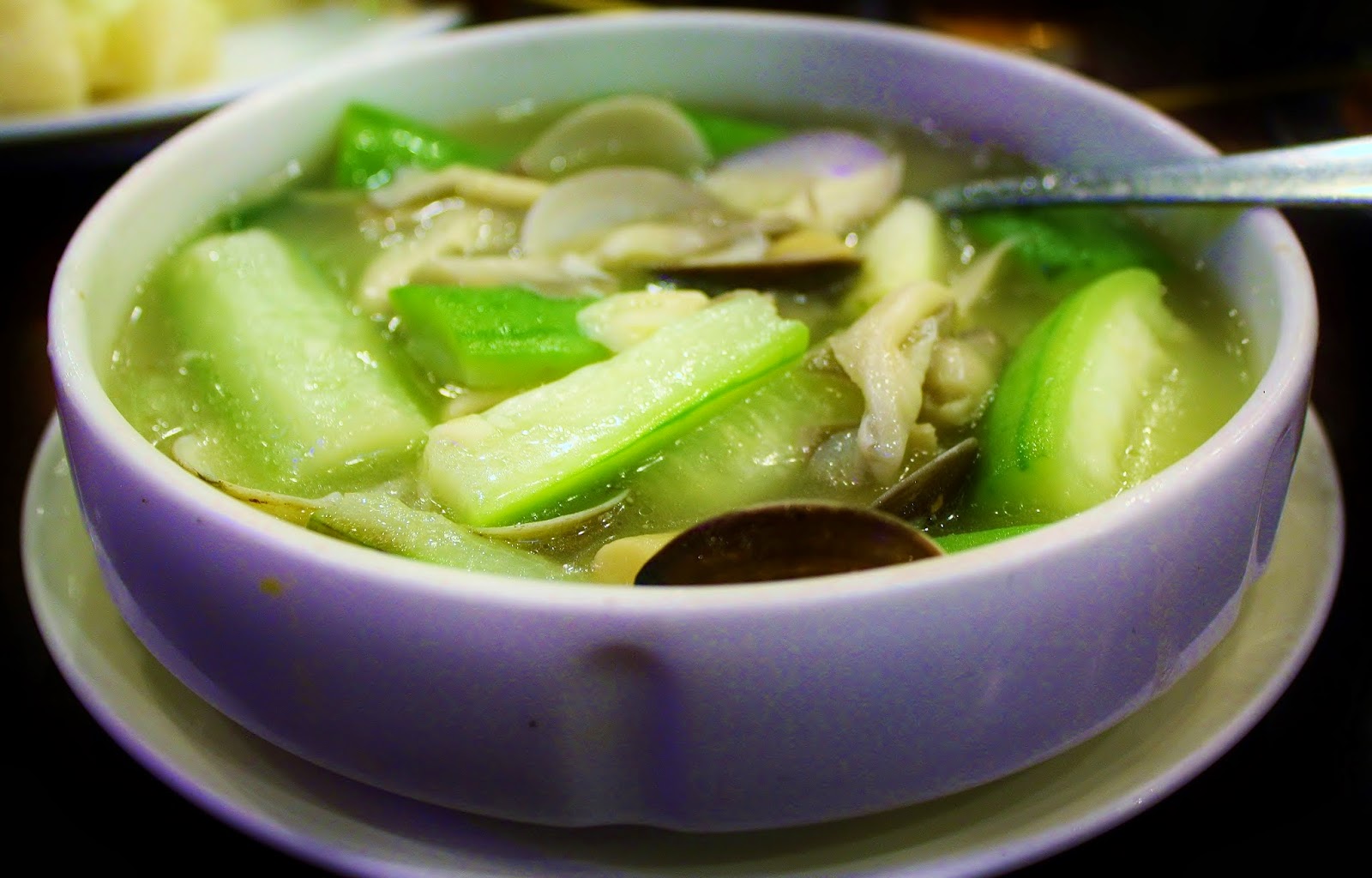 Veggies! It just so happens that the three of us are on the same page regarding the vegetable consumption.  Loofah and clams (蛤蜊絲瓜) is a homey dish that we have all had during our childhood.  While more famously known for its body cleaning purposes, loofah is actually a squash like vegetable that, to me, is like a cross between cucumber and zucchini.  The fresh clams adds a seafood essence to the dish. 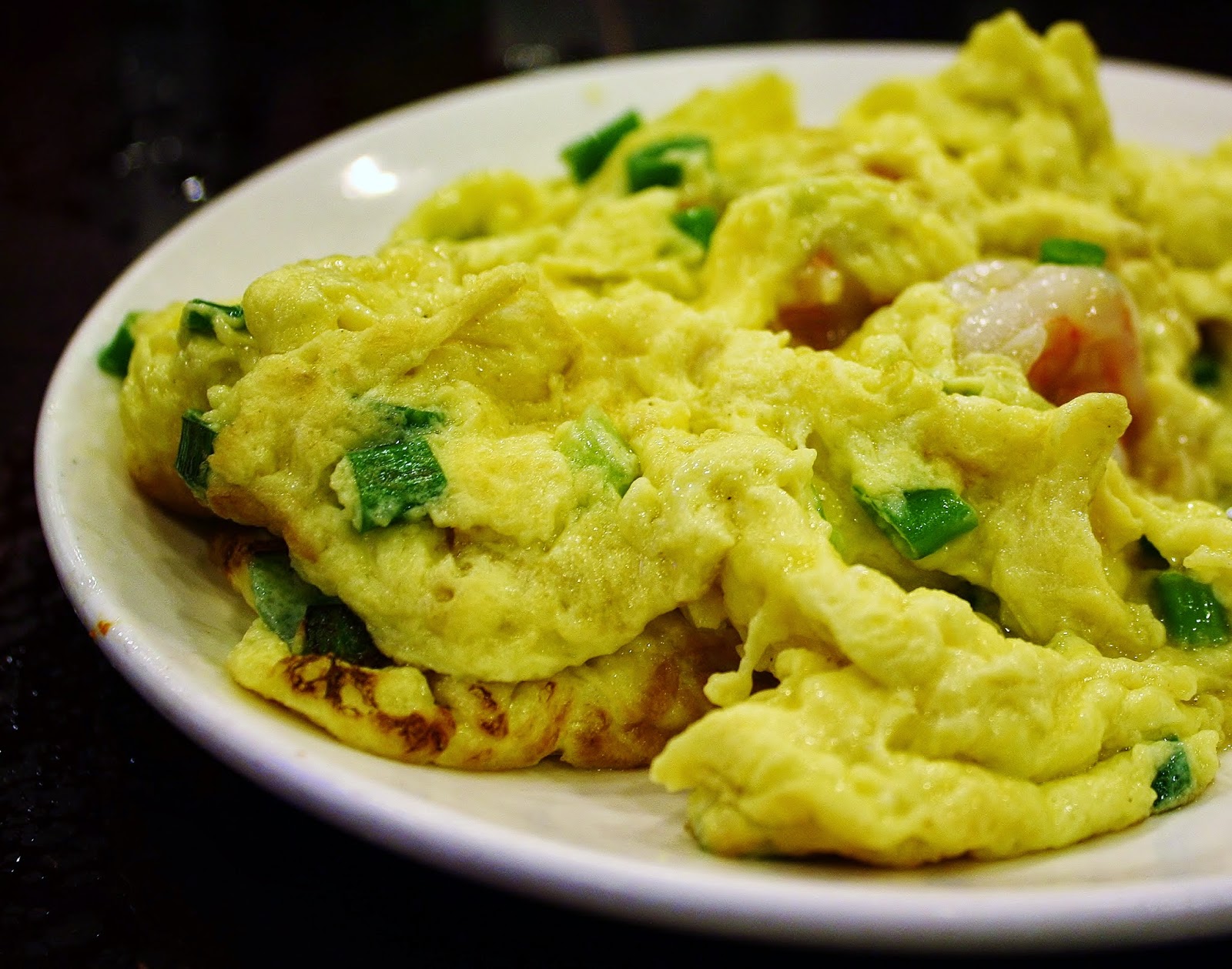 As the meal draws to a close, the yearning for heartier and more substantial fare grows.  Scrambled eggs and shrimp (滑蛋蝦仁) warmed us up and balanced out all the cold beer we had.  The greasy eggs and succulent shrimp provided a warmth that we really needed.  But even then, I'm pretty sure we drank some more.

There were two more dishes, but by this time in the meal, we had so consumed so many bottles of beer that it was not easy to recollect the names of the dishes... or even what we had eaten for that matter.  I would bank them being stir-fried seafood dishes though.  Cheers!