When I mentioned that there was Muslim Chinese people and hence, Muslim Chinese food, many of my co-workers responded that they never knew such people or cuisine existed.  So I decided to do a little research by browsing online and asking various family members about this unique group of individuals that happen to make delicious noodles and flatbread.

The Muslim Chinese are descendants of Arab and Persian Silk Road travelers.  Athough they have intermarried into the local Han Chinese population through many generations, they retain their religious beliefs such as the consumption of Halal meat and the restriction of pork from their diet.  Chinese Muslims are considered Hui people, which are one of the 50+ officially recognized ethnic minorities in China.  There is also a sizable ethnic Hui population in Taiwan as well.  In China, a large portion of Hui or Muslim Chinese are surnamed Ma (馬), meaning horse.  However, the root of the last name Ma supposedly originated from the Muslim name Muhammad.  It's no wonder that so many of the Islamic Chinese restaurants in Southern California are named Ma.

I dropped by Mas' Islamic Chinese Restaurant to grab some Muslim Chinese food, specifically the beef noodles and the sesame flatbread as a way to remember my Uncle Joe.  My Uncle Joe happens to be surnamed Ma and also happens to have parents who are Hui Chinese.  In fact, they even have a Koran that has been translated into Chinese characters.  But that all might just be coincidental... 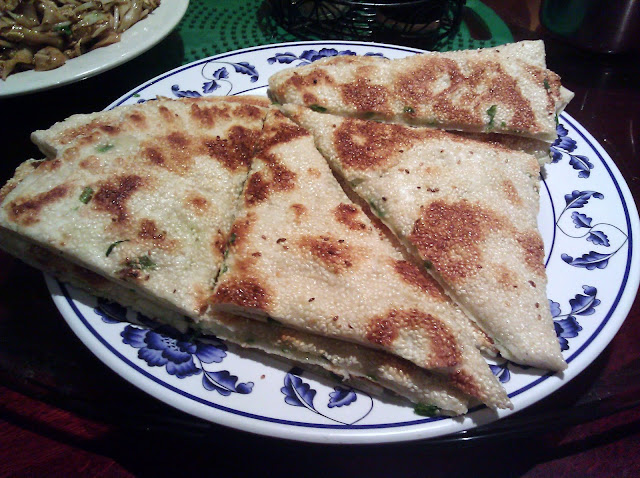 The sesame flatbread is what I came here for.  And let me warn you... the flatbread is no joke.  It's a platter of sixteen slices of sesame sweetness that will make your eyes open wide and your jaw drop completely open.  It's larger than an XL pizza pie, and it's something that even a family of four will have trouble finishing due to its sheer size.  The flatbread has a texture that is a cross between the firmness of a leftover French baguette and a spongey Ethiopian injera.  The look of it is also a combination of sorts... it reminds me of the delicate nature of an Indian naan but with the girth of a rustic Australian damper (bush bread).  When a co-worker took his first bite of this bread, he exclaimed, "it tastes like sesame."  No kidding.  There seems to be more sesame on this plane of bread than there are grains of sand on the beach.  But it's the sesame and the chopped green onions inside that form the base for flavor.  And it's the bread itself that forms an awesome foundation for whatever sauce or soup it gets eaten with.  Hint: it tastes great with the next item we ordered. 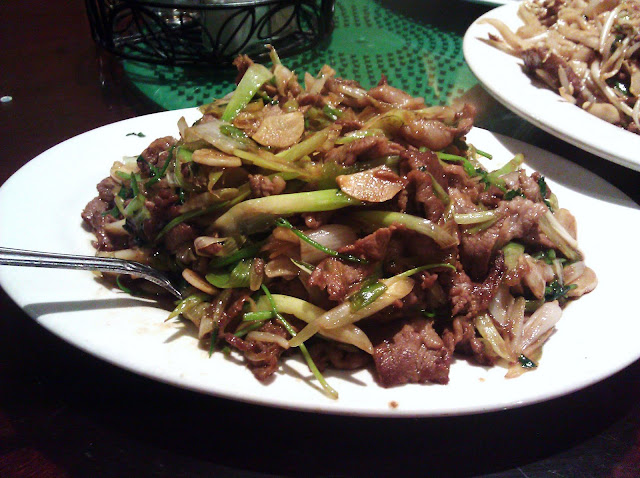 The absence of pork from the Islamic diet leaves a gaping void for a Muslim Chinese restaurant to fill.  And although Mas' seems to have filled that void with fish and seafood, it's lamb that seems to be the underacknowledged champion protein.  Each of the lamb dishes on the menu has been prepared with strong and flavorful ingredients (pickled cabbage, Chinese style barbeque sauce, chili peppers, etc.) to minimize the gamey taste that lamb naturally has.  The dish that we ordered was no different.  Upon first whiff the gamey taste dominates all other smells.  But one bite into the lamb, and the pungent garlic, spicy ginger, and hearty green onion immediately knock out that gamey flavor.  It's almost like Taiwanese stinky tofu... the smell is horrible, but one bite and you would think someone took Febreeze to the air.  Well... okay, maybe not so much. 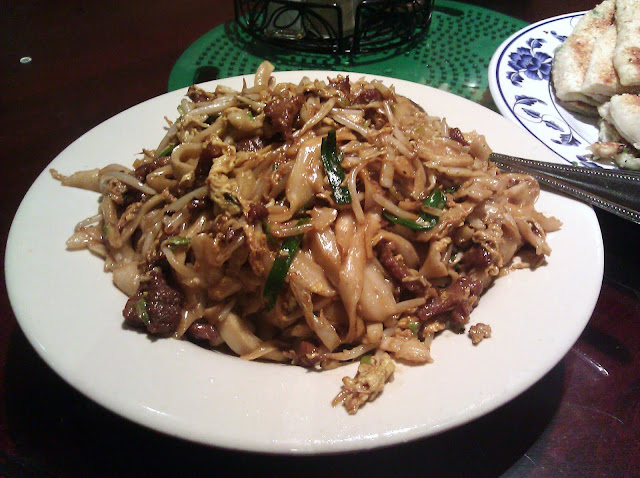 Noodles! Oh, noodles and pasta are my weakness... especially freshly prepared noodles.  This "dough sliced" chow mein refers to the way that the noodle is prepared.  Rather than making hand-pulled noodles (think ramen or spaghetti), the chef takes a blade to a big ball of fresh dough and shears the noodles off one ribbon at a time (think machete).  For a less violent image, think about that Tillamook commercial that shows the block of sharp cheddar getting sliced one perfect perpendicular plane at a time.  But think a lot faster... and less perpendicular... and also imagen a vat of boiling water at the other end of the figurative machete plank.  After a quick boil and an even quicker stir-fry with bountiful slices of beef, bean sprouts, green onion stalks and scrambled egg, the result is a chewier, more elastic version of the typical Cantonese beef chow fun.

Beware though, there was a significant layer of leftover oil on my plate.  If you are an avid gym-goer, then by all means, help yourself to another slice of flatbread to swivel around and soak up the fatty juices leftover by the lamb.  But if it's tough for you to hit the gym (if you have absolutely no discipline like me), then maybe taking a swig of that hot tea (to wash away the oil) is a better idea.
I have yet to learn more about the Muslim Chinese dishes or even about the people and their history, but sesame flatbread is a good start to further exploration.  I hope future culinary curiousity reveals more surprises about a people or world culture previously unknown to you.  To new discoveries and to my Uncle Joe... until next time, let's all get S.O.F.A.T.