Okay, enough talk about sweets and cupcakes.  Let's switch back to some real food. 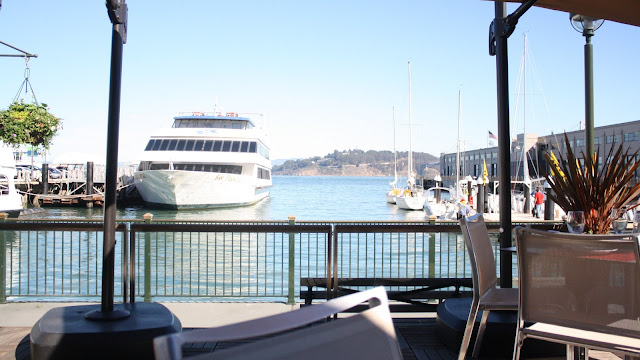 Back in November my brother and I headed to San Francisco for a quick 24 hour trip.  Our parents had gone on their own weekend getaway, so we thought we would treat ourselves to our own trip too.  Our main goal was to eat.  And eat we did.  The highlight of our meals was lunch at La Mar Cebichería Peruana, an oceanfront restaurant specializing in Peruvian style ceviche.  My friend Diana who had recently returned from working abroad joined us. 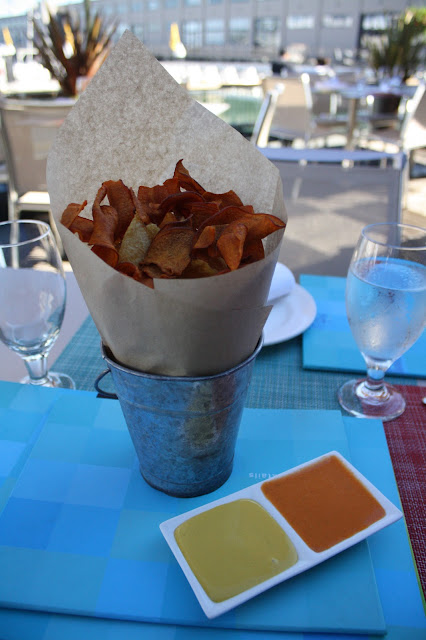 As we sat down at a table on the patio we were presented with a bucket of chips.  Every occupied table in the restaurant had a complimentary bucket of this house made appetizer along with a duo of vibrantly colored dipping sauces. 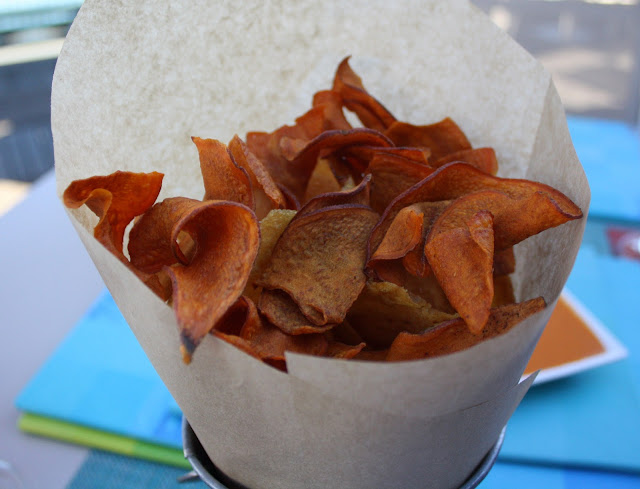 There was a mix of crisp potato slices, sweet yam curls and plantain strips in the bucket, all of which tasted great with the dipping sauces.  The yellow sauce was made primarily of aji amarillo, a Peruvian chile pepper.  It was blended with oil, cheese, and crackers, surprisingly, which made it mildly spicy and creamy at the same time.  The red sauce was made with aji rocoto, a much spicier chile pepper, and vinegar, red onion, and garlic.  This sauce definitely burned my tongue a little bit, so the combination of both sauces created the perfect blend of heat for me. 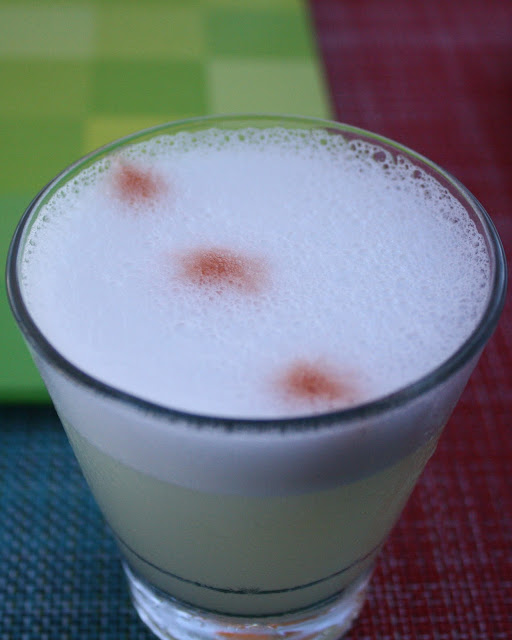 What's a good meal without a good cocktail right? While the orders were being prepared, we ordered a number of cocktails, the first of which was a pisco sour.  This cocktail was made with pisco quebranta, which is an alcohol distilled from Peruvian grapes also known as Peruvian brandy, along with lime juice, simple syrup, egg whites and bitters.  I really liked that the ingredients were not just shaken together but that the bitters was splashed against the foamy egg white to paint an aesthetically pleasing picture. 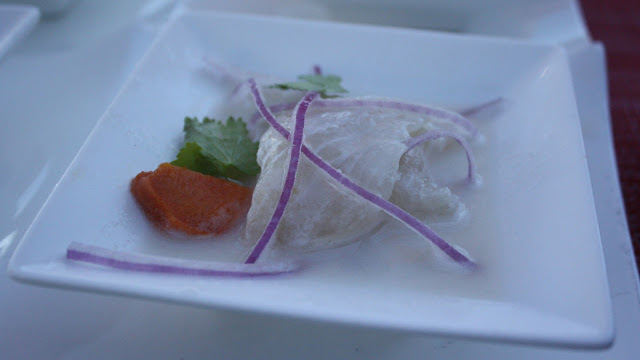 Of the six different Peruvian cebiches on the menu, we ordered five of them.  It sounds a bit insane, but it did help that La Mar offered a tasting of four cebiches on the menu.  The first of the four was the cebiche clásico with California halibut, red onion, cilantro, habanero, giant Peruvian corn and yam in leche de tigre.  Also known as tiger's milk, leche de tigre is the acidic liquid, usually containing lime juice, that cooks the raw fish in the cebiche.  The classic cebiche was a great start to the meal. 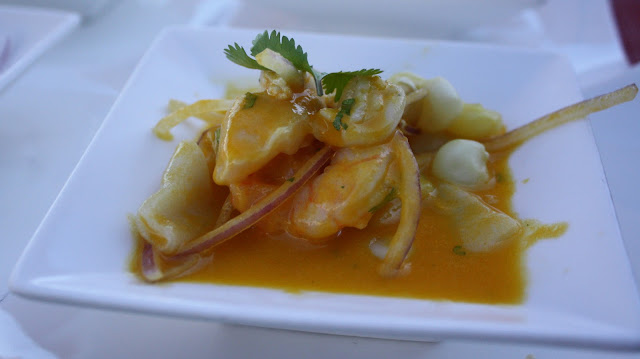 The next cebiche we had was the cebiche mixto, which was a combination of Mexican yellowtail, calamari and shrimp.  Also mixed in was an aji amarillo leche de tigre, a spicier version of the classic tiger's milk, which gave the cebiche a more potent flavor.  The remaining ingredients of red onion, cilantro, habanero, Peruvian corn and yam were the same combination of ingredients in the cebiche clásico.  The highlight of the cebiche was the tender rings of calamari in the spicy marinade. 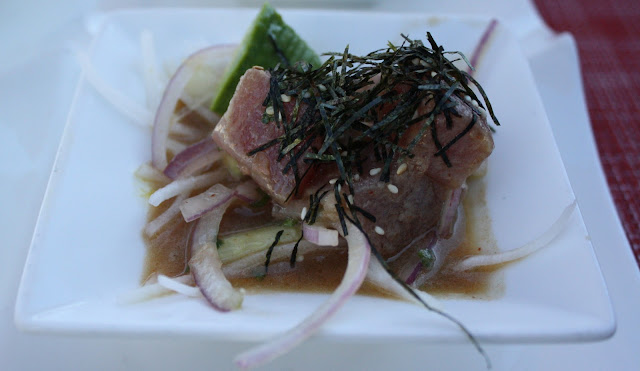 After the cebiche mixto, we tried the cebiche nikei, which was a play on Japanese flavors.  There was fresh tuna topped with red onion, avocado, Japanese cucumber, daikon radish, nori and sesame seeds.  The leche de tigre here was sweetened with tamarind, which was a successful way to represent the sweet and salty flavor that is characteristic of Japanese cuisine.  This was a favorite at the table. 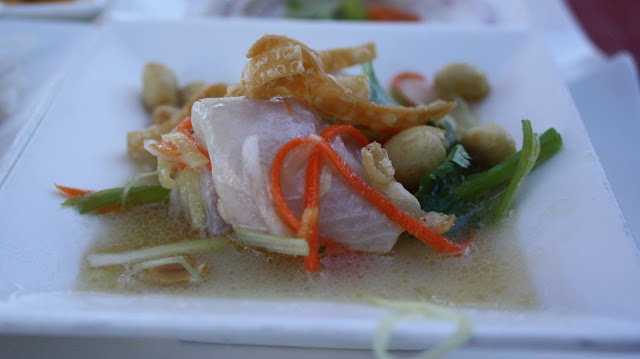 The last of the tasting was the cebiche chifa.  This yellow cebiche had more flavors in Chinese cuisine such as peanuts, scallions, ginger, pickled carrots and daikon.  Strips of deep fried wonton skin and cilantro garnished the fish dish.  The sweet and sour sesame oil flavored leche de tigre rounded out the cebiche well.  I really enjoyed the crunchy textures and the rawness of the scallions and ginger.  We thought that it tasted like a sophisticated version of a Chinese chicken salad. 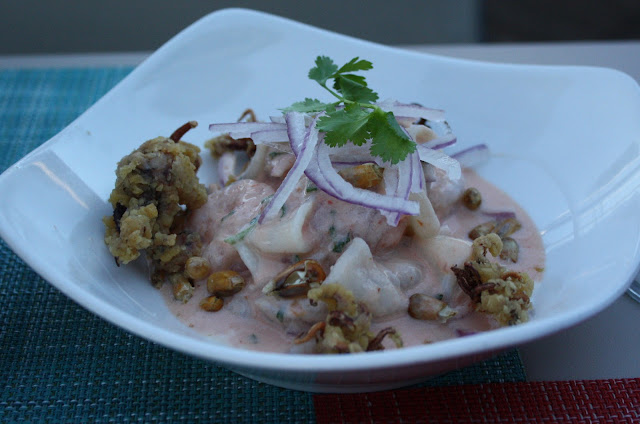 The cebiche tasting was so good that we decided to add on a full order of the cebiche barrio.  This variation of the classic cebiche was probably my favorite because it had some of my favorite seafood... yellowtail, mussels, clams, scallops, shrimp, and deep fried battered calamari.  The red onion and cilantro with the spicy rocoto leche de tigre provided a crisp freshness and spicy yet creamy flavor.  It reminded me of Sriracha mayonnaise used in many Asian fusion dishes.  I could have done without the cancha, the toasted corn nuts, but the fried calamari more than made up for the jaw breaking corn. 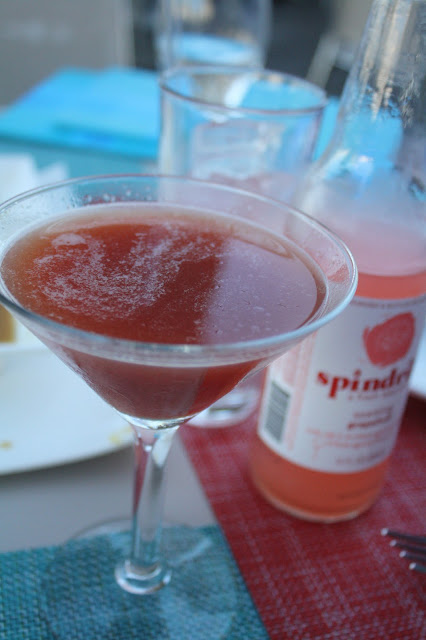 After a whirlwind tour through five unique cebiches, it was time for more drinks.  We ordered a bottled sparkling grapefruit beverage and the blood and sand cocktail.  Made with Dewar's scotch whiskey, blood orange, Heering black cherry liquor, and drambuie, this was more to our liking than the pisco sour.  We could taste the whiskey in the drink, which is quite important to some.  It was a bit stronger but also sweeter than the pisco sour.  The blood orange and black cherry liquor blended well to make an alluring cranberry color and a smooth and deep fruit flavor.  The swirling clouds on top of the glass really did make the drink look like blood and sand. 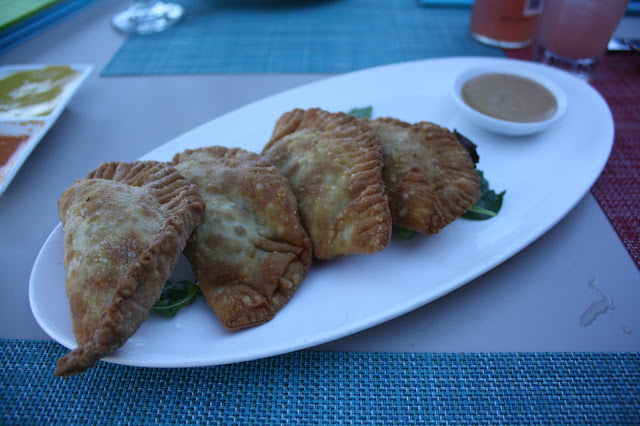 Since we ordered the tasting of cebiches, we thought we should do the same for the empanadas.  Although there were only three of us eating, we really did try to eat just about everything on the menu.  The quartet of deep fried deliciousness was served with the house panchita sauce, another condiment that had crackers and chile peppers in it.  That was the second sauce that was made by blending crackers with oil and chile peppers.  Our eyes were opened to new aspects of Peruvian cuisine.  It was not just lomo saltado anymore. 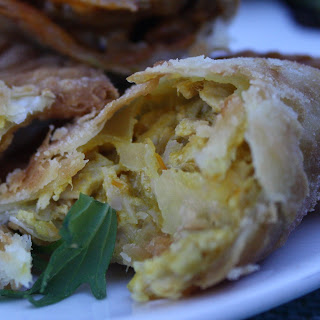 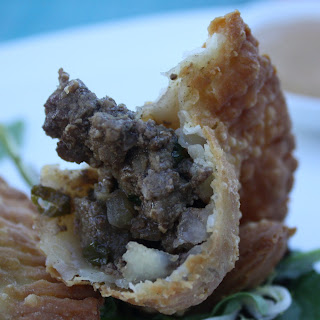 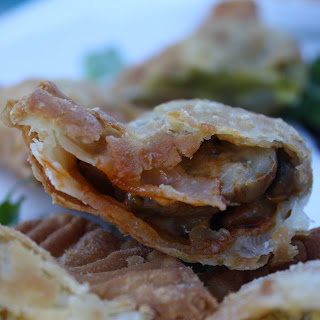 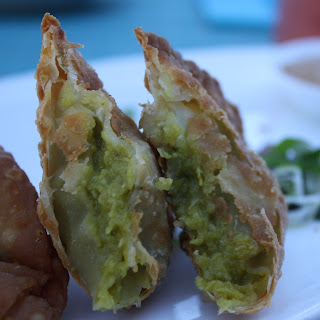 First, we had the empanada de aji de gallina, stuffed with a Peruvian chicken stew and aji amarillo sauce.  The chicken was shredded but not dry in the least, and the sauce made the inside very savory and hearty.

Next, we tried the empanada de lomo saltado, and it was amazing.  The soy and oyster sauce flavored beef was beyond flavorful.  It blew my mind that an empanada could contain lomo saltado, a classic Peruvian dish of stir-fried beef and potatoes.  Seriously, amazing.

There was also an empanada de k'apchi, which was stuffed with pisco flambéed crimini mushrooms.  The shell of this empanada was the crispiest out of the four, and the filling really warmed me up like only a comfort food can.

The final one was the empanada de tomalito verde filled primarily with sweet corn and blended with queso fresco, cilantro, and more sauces.  The sweet corn had a consistency more like mashed potatoes and the sweetness of yams.  It was a smart way to finish off the four empanadas. 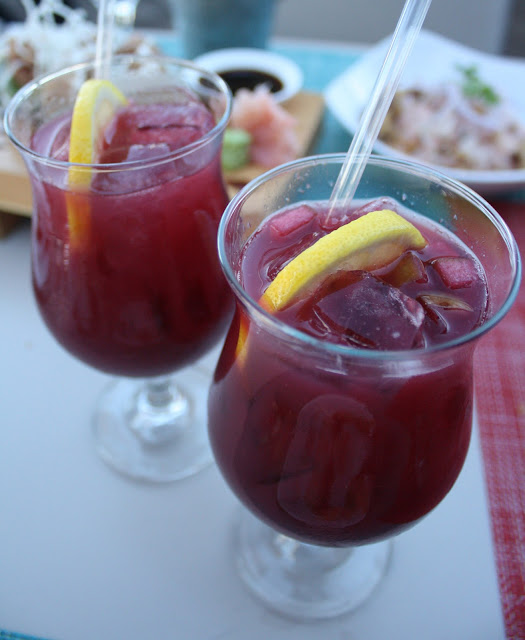 Another sampler round of Peruvian appetizers was on its way down to digestion, which meant that another round of drinks were to be ordered.  This time we decided on the house sangria at the server's suggestion.  We liked it because the taste of the wine was still prominent, but the fresh fruit was present as well.  Our glasses were quickly dried out. 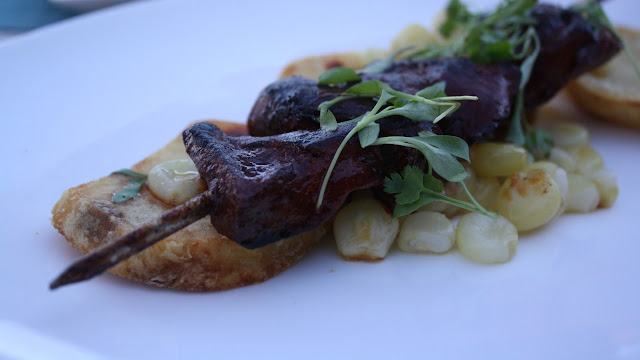 Of all the items on the menu, my brother was the most excited for the anticuchos de corazón, grilled skewers of beef heart.  Knowing my brother he probably thought eating the heart of an animal was primal and masculine, and I guess in some ways it really is.  But after Diana chomped down on some of the grilled heart, I knew it did not seem as primal as it seemed.  Diana's palate is very, uh... how do I say... uh... ladylike.  Yes, ladylike.  So the tender beef muscle was not daunting.  The fried potatoes served with it were like rounds of flat potato wedges.  So fried and so delicious.  What's better than grilled meat and fried potatoes? Oh, and there was some seriously gigantic Peruvian corn piled on the plate too.  Gigantic. 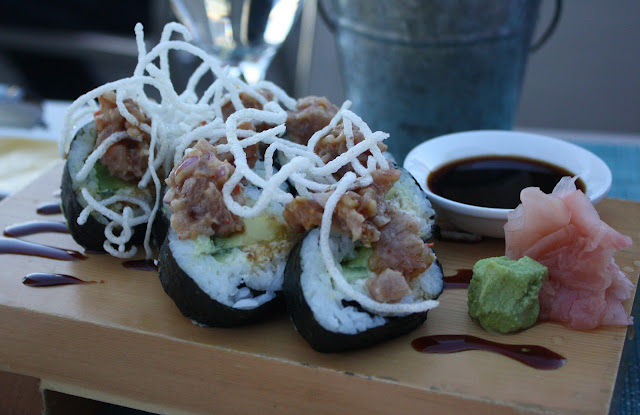 Our stomachs were pretty packed by this time in the meal.  We had spent almost three hours at the restaurant by now, but there was still one more item that we wanted to try.  Peru is a country that is home to many Chinese and Japanese immigrants, and so much of its cuisine is influenced by the culinary cultures of China and Japan.  We wanted to taste some more of the Asian influence, so we ordered the rollo nikei.  We liked the flavors of the cebiche nikei so much that we chose a similar taste for the sushi.  The roll had dungeness crab inside with avocado and cucumber.  On the outside tuna tartar was dropped over the top of each slice, and crispy noodle strips garnished the entire plate.  I liked the mix of meaty and crunchy textures, but it simply just tasted good. 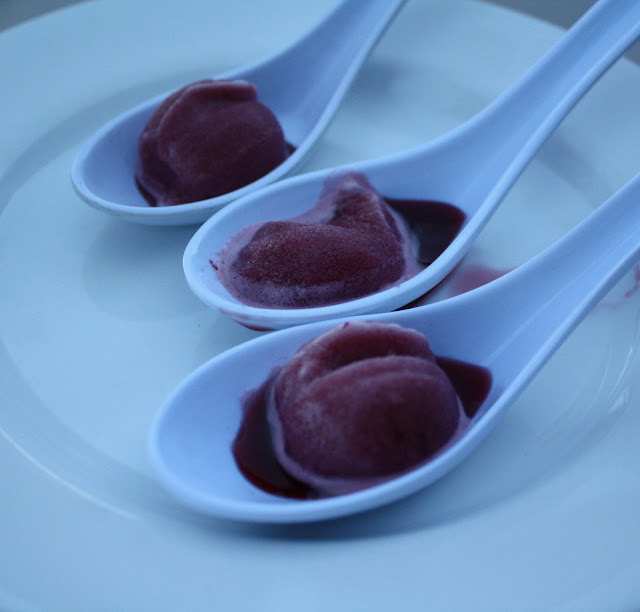 I was really looking forward to the end of the meal because I had noticed the neighboring tables being served little drops of purple sorbet on spoons.  They were actually spoonfuls of chicha morada sorbet.  It was icy.  It was sweet.  And it was made with Peruvian purple corn, strangely enough.  It was more pleasing to the eye than to the tongue, but it was not bad at all.  It, probably due to the color and the sweetness, sparked a unpleasant memory of Welch's grape juice from my elementary years.  But no matter it was an eye opening experience nonetheless.

La Mar was definitely a favorite meal during our quick trip to San Francisco.  And I was more than delighted to see an old friend who I had not seen in a long time.  Thanks Diana for braving the Sunday Embarcadero traffic for us and rushing us to the BART station in time to catch our flight for the airport! Just barely, might I add.  Oh, yes, and happy birthday, Brother.  Until our next quick trip, let's all get S.O.F.A.T.
ML - 20121104
Posted by S.O.F.A.T. (Stories of Food and Travel) Blog at 12:00 AM