Post 97: XOCO - Discovering Rick Bayless One Plate at a Time (Chicago: Near North Side)

On my first business trip to Chicago, my friend Jen and I made a full fledged attempt to make reservations at Rick Bayless' Frontera Grill.  During a layover at O'Hare on family vacation, I tried out Tortas Frontera, the order-at-the-counter version of the Bayless experience.  I vowed to return for a meal at one of his sit-down restaurants during my next visit to Chicago.  But alas, Frontera Grill was not taking any more reservations... so Jen and I crafted up Plan B for my second business trip to the city.  We decided on XOCO, the order-at-the-counter-and-then-sit-down Rick Bayless restaurant experience.  I believe it was a good compromise.

As an avid viewer of his show Mexico: One Plate at a Time on PBS, I have seen Señor Bayless work wonders with Mexican cuisine.  He brings to light obscure regional Mexican dishes that help remind us that tacos, quesadillas, and enchiladas aren't all there is to Mexican food.  His dishes are truly authentic in flavor and preparation, but there is always a touch of creativity and showmanship that he employs to connect down home Mexican comida with the contemporary American food lover. 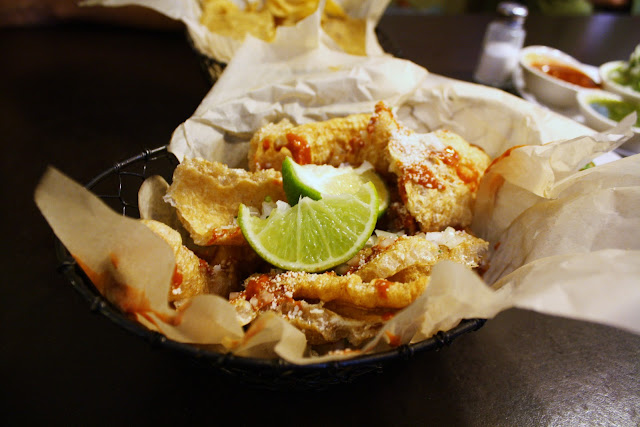 The combination of authenticity and showmanship shined through in the chicharrones.  The pork skin was deep fried hard exactly the way that Mexican street vendors do it... truly crispy inside and out.  They were topped off with the Bayless showmanship of Tamazula hot sauce, onions, cilantro, crumbled queso añejo, and fresh, squeeze-it-yourself lime.  Tamazula hot sauce tastes similar to the bottled Tapatío hot sauce in that it is thick and slightly smoky and peppery in flavor.  It is deep red, and it is full of flavor rather than simply spicy, and it is far from the peppery vinegar that we know as Tabasco.  The añejo cheese added a complex saltiness to the chicharrones too because its rind is rolled in paprika.  There were only so many deep fried pork skins that we could eat though.  There were many more starters to be had. 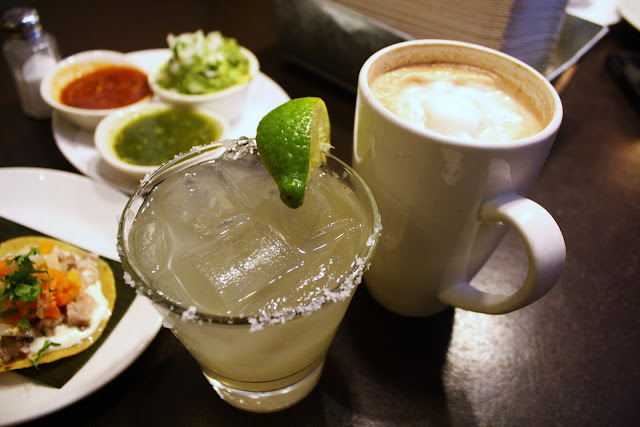 Our starting drinks included the XOCO margarita, made with Cazadores Blanco, Combier, house made lime bitters, fresh lime, and cucumber.  The margarita was salted on the rim and shaken by the cashier himself.  When was the last time you got a margarita made at the cash register by a cashier-bartender? That was awesome.

If you're like Jen, and you happen to be on your lunch break and need to refrain from consuming alcoholic beverages, perhaps the bean-to-cup chocolate or the chocolate coffee on the menu is the proper selection for you.  The chocolate coffee is exactly what Jen ordered.  If you are expecting a piping hot cup of Joe or a mug of sweet milk chocolate, you will be disappointed.  The typical cup of coffee is not what XOCO serves.  The temperature is far from boiling, and it is most likely due to the addition of chocolate.  If you are expecting a soothing cup of genuine chocolate flavor, then you will be quite delighted.  The beverages are nothing short of extraordinary. 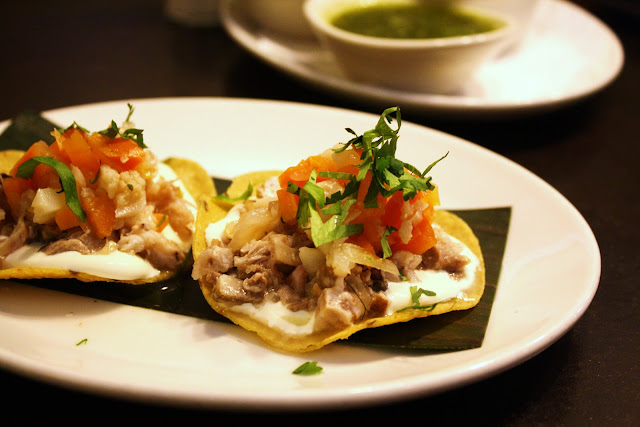 While perusing the menu at the counter, I knew immediately that I wanted to try the pickled pigs' feet tostada.  Surprisingly, the pork was chilled as were the jalapeño pickled vegetables that topped off the handheld toasted tortilla.  But not surprisingly, the blend of cool crema and cilantro complemented the chilled pork.  It made for a refreshing bite especially when the tostada chip itself was thin and crispy.  But biter beware, if you take a big bite like I did, get ready for a flurry of cubed pork rainfall. 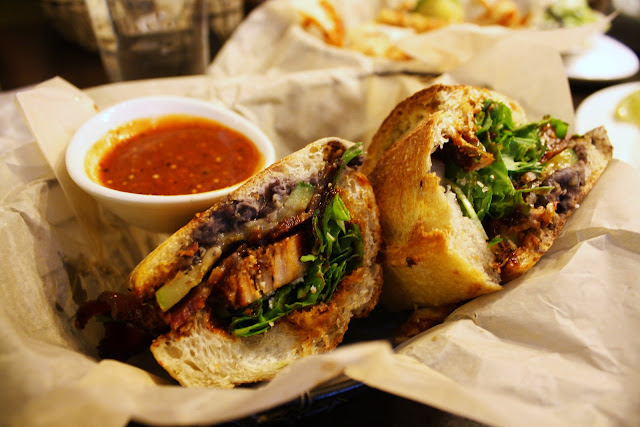 At the recommendation of Jen's co-worker, a XOCO regular, I ordered the pork belly torta, which just so happened to be the special of the day.  Packed at the center of the crusty bread was a cut of fatty and tender pork belly.  And... well, this is the part where I tell you how ridiculously delicious this Mexican pork belly panini was.  But guess what... I'm not going to.  You can use your imagination and let your wildest dreams of pork belly take over.  All I am going to say is that when I tasted the pork belly I felt my eyes roll back a little bit.  I had an urge to kidnap the sandwich to a secret hiding spot, perhaps under the table, to enjoy it selfishly so that no one else could share my guilty experience with me.  I completely ignored the arugula and whatever else was inside the sandwich... except... the... bacon.  Yes.  There was BACON.  Lying sinfully next to the pork belly.  What the... hell.  Who thinks of this deliciously heinous combination? Gracias, Rick Bayless.  Te quiero, torta rica.

We also ordered the chips and guacamole, which came with both salsa roja and salsa verde.  All three condiments were great additions to just about everything on the table including the torta.  But whatever.  I just bit into a pork belly and bacon torta.  Holy shit. 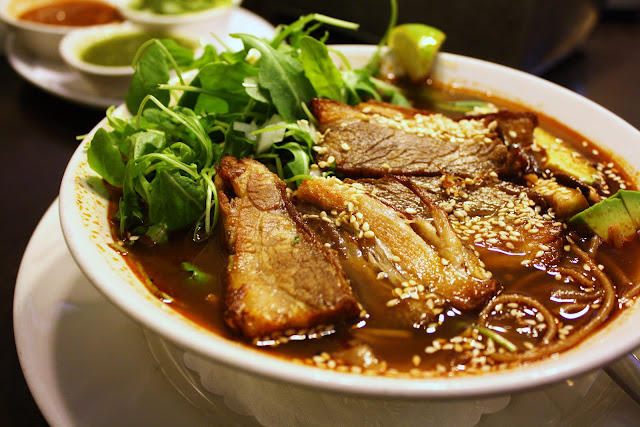 Jen ordered the pork belly vermicelli or fideos, the Spanish word for noodles that are most commonly used in soups.  This includes Asian style noodles used in Mexican and Latin cooking such as vermicelli.  The pork belly in the soup was equally as succulent and tender as the cut that was in the sandwich.  However, the texture of this pork belly was a bit more crisp on the outside.  A spicy salsa negra was in the broth base, which gave the soup a fiery taste that was abusively addicting.  The diced up avocado that peaked up through the gleaming pork belly broth was an added plus.  Its smooth and creamy texture contrasted the spiciness from the soup.  Jen and I agreed that we preferred authentic Chinese and Italian noodles to the fideos here, but no matter... the pork belly, once again, was eye-rolling delicious. 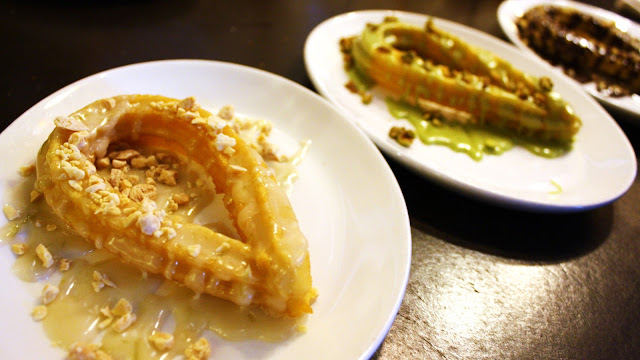 What better than a sweet dessert to help cool down the spicy kick of salsa negra? Well, three desserts, of course.  I let all my inhibitions go and ordered all three churros on the menu.  The trio of churros for that happy hump day were the chocolate/peanut, the margarita/almond, and the pistachio.

While the chocolate glazed churro suffered no faults, the margarita glazed churro with almonds actually enlightened my taste buds with its sharp tang and tartness.  The pistachio churro, however, was hands down the most memorable of the three.  If there was one word to describe it, the word would be fragrant.  The churro really was fragrant.  An explosion of pistachio passed through our nasal passages and jumped from taste bud to taste bud... and I'm almost sure that not one taste bud was skipped over.  Who knew pistachios could be so potently powerful? In a good way, of course.  The Disneyland churro is in a class of its own, but this Rick Bayless pistachio churro in all its glorious, green glaze was damned good.  Es la verdad. 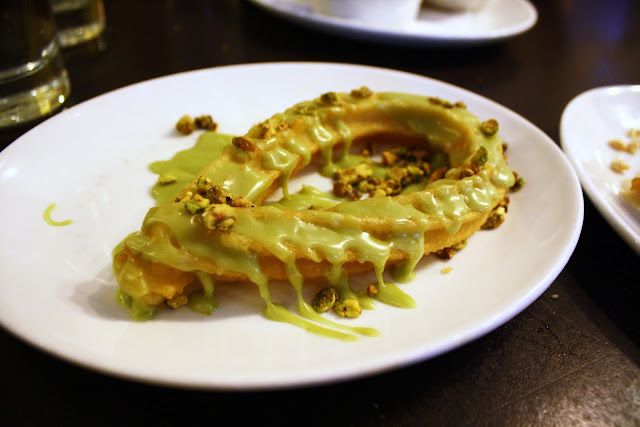 After this stomach stuffer of a meal, my good friend Jen had to return to her corporate duties.  And I had digestion on my to do list.  But don't think for a minute that after all these chicharrones and churros, tostadas and tortas, pigs feet and pork belly, that I was done eating my way through Chicago.  There was still some time left before I needed to head to the airport, and one thing I had not accomplished just yet was... find a bakery.  Thanks Rick for showing us some flair with your take on Mexican cuisine.  I loved each plate at XOCO, and I will definitely be back for Frontera Grill next time.  Hasta luego, let's all get S.O.F.A.T.