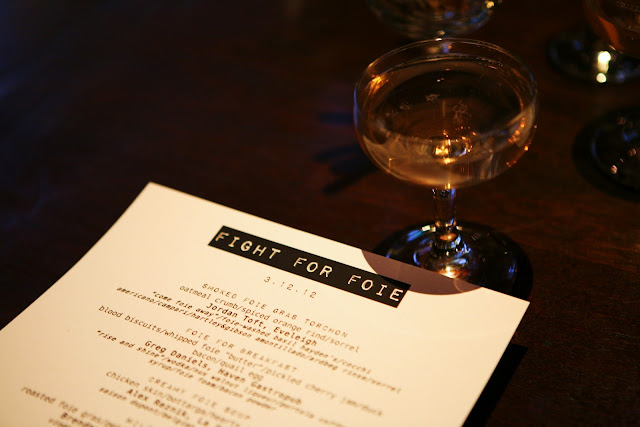 Earlier this year I attended Fight for Foie at Haven Gastropub in Old Town Pasadena.  The event was held in support of keeping the fatty goose liver on restaurant menus in California.  Proponents of the ban on foie gras argue that force feeding geese and ducks in order to plump their livers up is inhumane.  Those against the ban on foie gras say that palatable poultry do not have gag reflexes and that the birds naturally overeat in the wild anyway.  Both sides made their voices heard.  Despite the dozens of protesters outside the restaurant armed with picket signs, iPads, and fliers, drovers of foie gras fiends continued to walk into the restaurant to dine on the delicious delicacy.  I was one of them.  As soon as the restaurant opened for this private event, my friends with foie fetishes and I dined on a multi-course (seven to nine courses depending on how it's counted) tasting menu designed all around the fiendishly fatty foie. 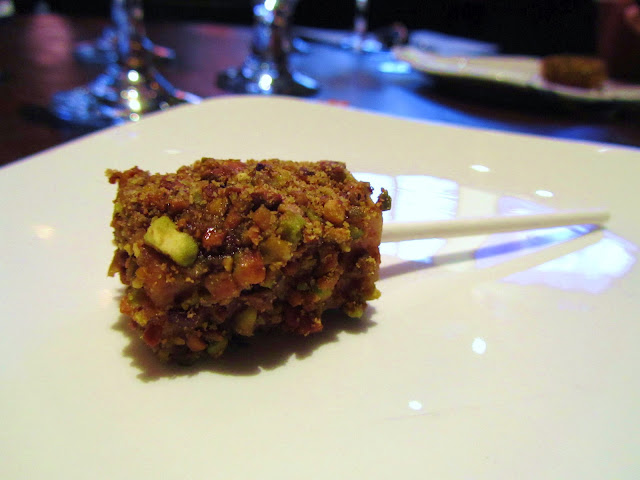 We were first treated to an amuse bouche in the form of a foie gras lollipop rolled in crushed pistachio.  The look reminded me of a See's Candies lollipop because of its rectangular shape, but the texture of this foie lolli was nothing like rock hardness of the See's candy.  It was soft to the bite, but it was densely packed with liver fattiness.  One bite and we knew we were in trouble.  The first course had not even arrived yet. 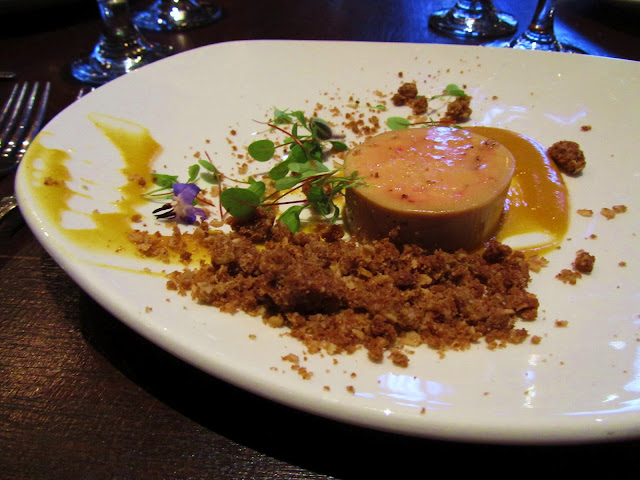 Our first course was a smoked foie gras torchon surrounded by oatmeal crumb, spiced orange rind, and sorrel.  The pate of foie gras was cooked after being wrapped in a towel allowing it to retain all of its moisture and original flavor.  It was luxuriously smooth with the crunch of the oatmeal, and it was buttery and spicy... and very insanely rich.  Connie and I could not continue savoring the foie gras without ordering some hot tea... but props to Ken for not only finishing his foie but mine and Connie's as well.  Holy... 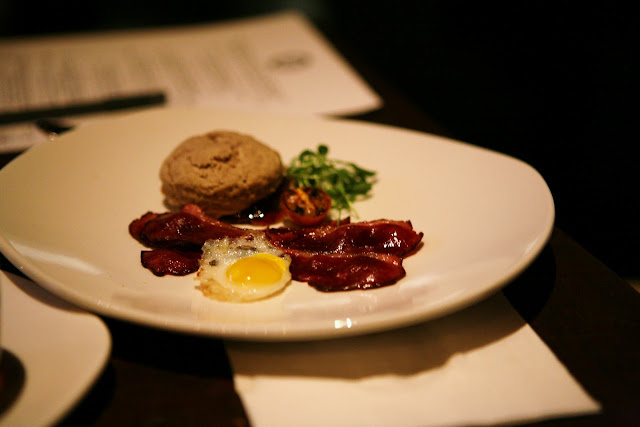 Next we were served foie for breakfast complete with duck blood biscuits, duck bacon and a sunny side quail egg.  In the world where turkey is the most popular form of bacon made from poultry, this duck bacon was definitely a taste for sore taste buds.  The deep crimson color of the duck was beautiful and had a profound depth of flavor to match. 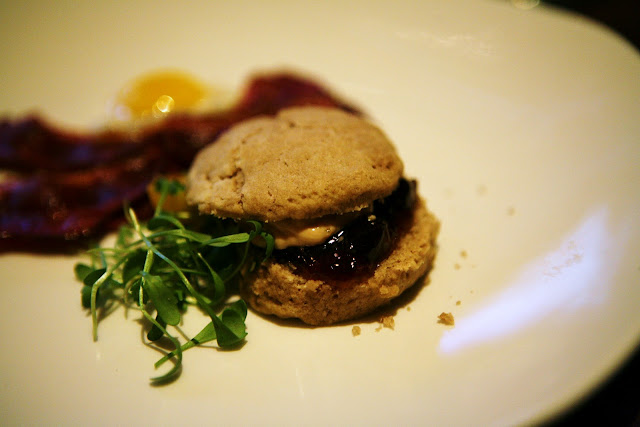 The biscuits had a few drops of duck blood in each one, and they were accompanied by an airy whipped foie butter and pickled cherry jam.  The biscuit was crumbly like a cookie but cohesive like a shortbread.  The tartness of the pickled cherry jam peaked through the foie butter at the right moment.  It was almost like an adult version, albeit a very expensive adult version, of the classic PB&J.  This course was creative and clearly set itself apart from the previous course, which was basically an offensively large chunk of foie gras. 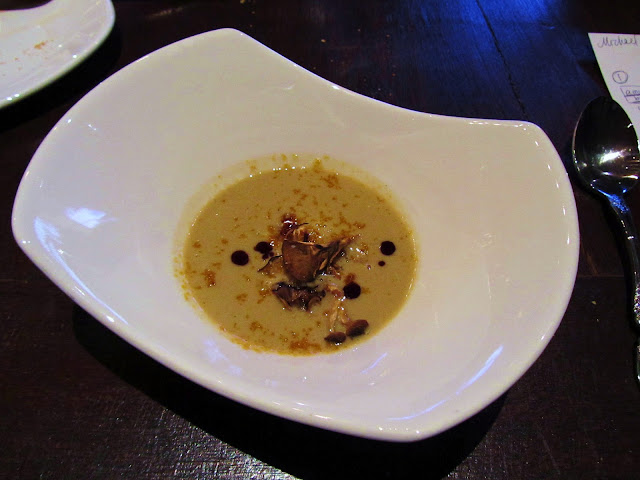 After breakfast came a creamy foie soup with strips of chicken skin, bottarga, and hearts of palm.  I'm all for crispy textures against a soft or sultry background, but the chicken skin was not a favorite of mine.  Bottarga, a cured fish roe that is also known as the poor man's caviar, was dotted throughout the soup.  The soup itself was perhaps a bit too airy and not as concentrated as I would have hoped... although perhaps a more concentrated foie soup may have provided the basic elements to trigger a heart attack. 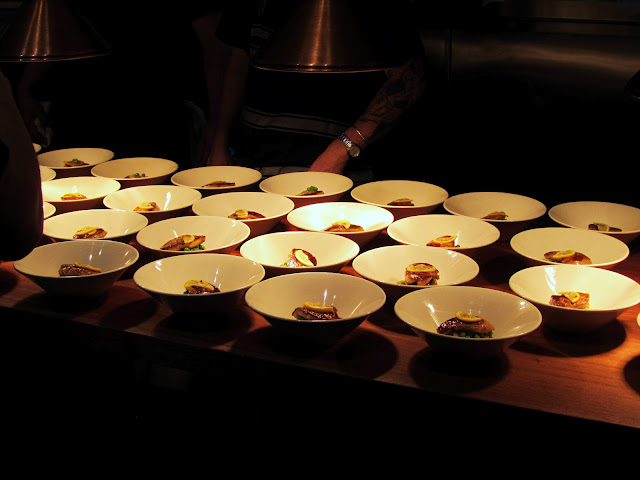 A meal heavy in fatty foods definitely calls for a few digestive walks, so I walked over to the open kitchen to discover the many chefs, servers, and other staff hard at work.  Since the majority of the restaurant patrons began dinner service at the same time, the kitchen was busy preparing dozens of the next course.  Although coordinating a multiple course foie gras tasting menu requires relentless energy and effort, the chefs and staff made the dinner service seem effortless. 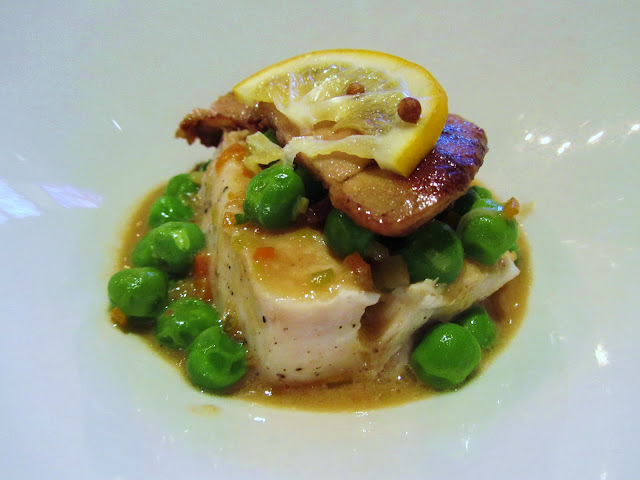 After an amuse bouche and three courses of foie gras, a wild escolar with roasted foie gras, petit pois a la francais, and sauce albufera was presented.  The fresh fish and English peas made for an initially lighter dish, but the Hollandaise and béchamel sauces helped tie the richness of the foie gras back in.  This was a sous vide fish, and it was very mild and ambivalent in a good way.  After a heavy onset of fatty foie, the fish dish returned the heaviness back to center, which made for a pleasant course in the middle of the meal.  Many thanks to the crescent of lemon for the help. 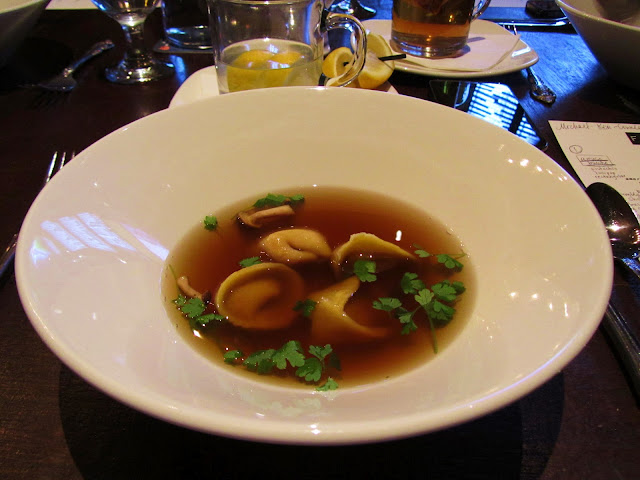 A multiple course meal isn't a multi-course meal without a pasta dish.  Our pasta dish was a tortellini in duck tongue brodo.  The pasta was stuffed with foie gras and rhubarb, and beech brown mushrooms and micro celery floated around in the broth.  It was St. Patrick's Day at first sight, but the foie gras didn't exactly start a party in my mouth.  The foie gras was a bit too soft, and the tortellini skin was a bit too thick for the soft foie texture.  A ravioli may have been a better pairing with the foie, but it may also have been too predictable... though the mushrooms did complement the broth well. 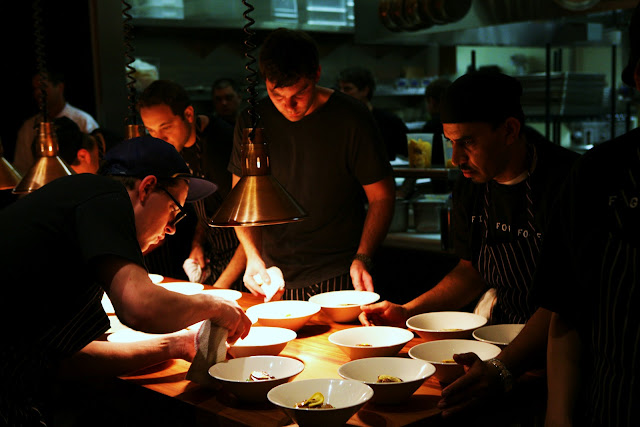 The blackberry sorbet intermezzo arrived two courses before the end of the meal... and it could not come quickly enough.  By this time in the meal my friends and I decided that we would only take one bite of the remaining dishes because the foie gras was so rich in fat.  I could feel my heart beating faster than normal.  My body was trying to tell me something... that perhaps banning foie gras in California would be better for my health... although I did not like the idea of having to travel to another state just to satiate a foie gras craving.  The sorbet was quite refreshing, but it was not enough to truly cleanse my palate.  I ordered another cup of hot tea... my fifth or sixth now. 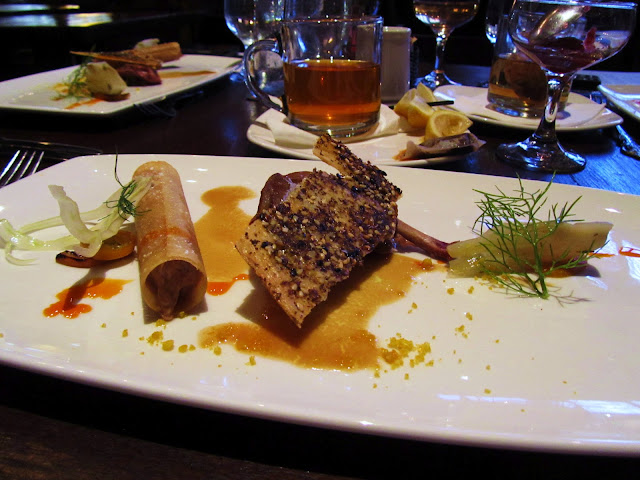 The penultimate course came in the form of a za'atar crusted squab with a foie gras pastilla, fennel, and Meyer lemon.  The dill and fennel done three ways were cool and revitalized my palate a bit.  The dish paired the flavors and textures well.  This was my first time having squab, and it was quite delicious.  The fattiness of the squab was quite similar in texture and flavor to the foie itself.  The foie gras pastilla could be described as an egg roll stuffed with soft foie.  It was something I could have much more of if it was served as an individual appetizer or earlier in the meal.  The crackle of the pastilla wrapper was music to my ears... but half a dozen courses of foie gras in, and I was about to throw in the towel. 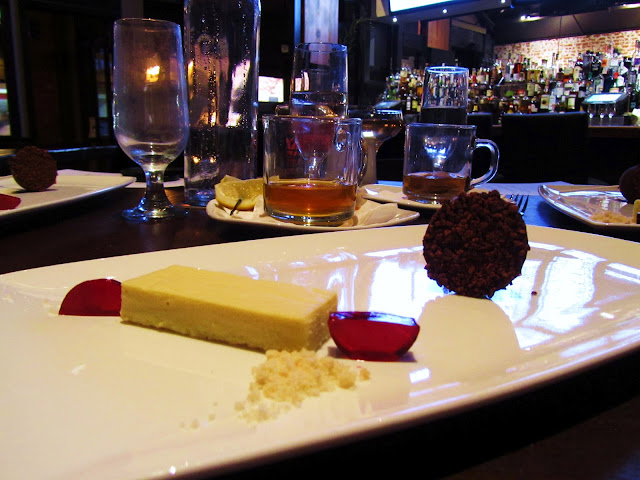 Naturally the final course was dessert.  And if there was anything that was both a blessing and a death omen combined, it was this duo of foie gras cheesecake and foie gras bon bon.  The vanilla crumble, hibiscus gel and micro tangerine lace were light and just sweet enough.  The chocolate in the bon bon presented a balanced, chilled sweetness.  Ken exclaimed that he was so happy to see chocolate... whether it was because he actually just likes chocolate, or it was because chocolate seemed so light in comparison to all the foie gras we had just eaten... well, I'm not sure.  But my thoughts exactly... something sweet after all the savory fattiness was quite the blessing.  Connie thought the cheesecake just tasted like cream cheese, but I this was the death omen.  I understand that foie gras and cheesecake blend well together, but something lighter and more refreshing as the final course would have fared better.  One bite of the cheesecake, and the towel was in.  Time for some more hot tea.

All in all the multiple course Fight for Foie was quite the experience... one that I would never forget.  The many different chefs all put their best foot (feet) forward in terms of presenting the best examples of their foie gras dishes.  However, the meal was quite heavy and may have helped the protesters prove the point that the ducks and geese are tortured during their overfeeding.  I felt a little overfed and plumped up myself.

But at the end of the day, the choice to eat organic vegetables, sustainable seafood, or meat products that have not been augmented by the human hand should be the choice of the consumer.  This should not be dictated by any government body whether state or federal.  Those who want to eat will find a way to eat what they want to eat.  Banning foie gras in California may cause avid diners to spend their money in states that permit the sale of foie gras.  Nearby foodie cities such as Seattle and Portland or even big dining cities as far away as Chicago and New York may see a slight boost in their economies at the expense of LA and San Francisco simply because a product in demand is offered there rather than here.  Let that be some food for thought.  Let the Fight for Foie continue on.  Until the next fatty meal, let's all get S.O.F.A.T.