Okay, so I'll miss the commute with my cousin.  But what will I miss about the food that's actually by the office? Immediately, Bollywood Indian Restaurant comes to mind.  Authentic Indian restaurants in the Thousand Oaks area are already pretty hard to come by, but trying to find one that's situated in the basement of an unnamed office complex complete with man-made ponds and mini waterfalls is even harder.  Hidden gem? Yeah, I'd say so. 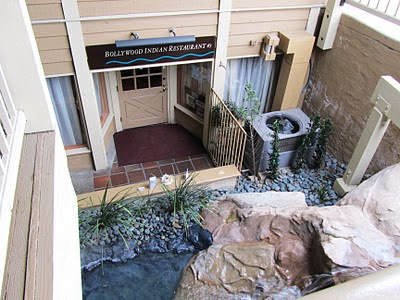 The restaurant is located within walking distance of the office, but I've only ever employed my lower body as transport once.  I'm usually too impatient to walk (or wait) for my beloved Indian food.  Sipping on sweet lassi and breaking up bits of papad helps pass the time while favorites such as chicken tikka masala, lamb vindaloo and dal tarka are being prepared. 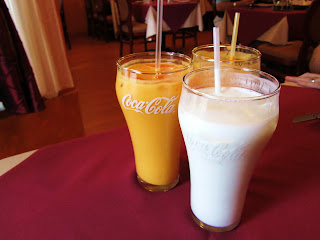 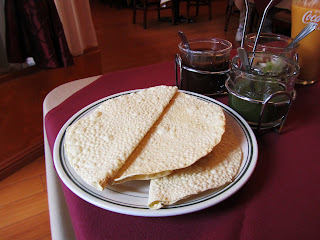 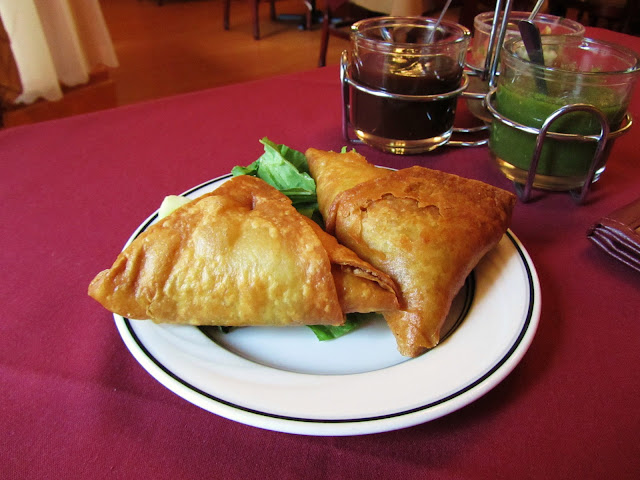 If there's any meal that suggests that gluttony should be limited, it's lunch.  We've all experienced the post-lunch food coma that enshrouds us with the onset of impending sleep, and I'm almost certain that afternoon comatose is not conducive to the work environment.  Thankfully, Bollywood serves lunch specials in smaller portions.  However, I have no discipline in holding myself back from gorging on delicious Indian food.  Ergo, bring on the extra samosas! 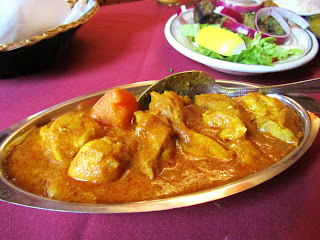 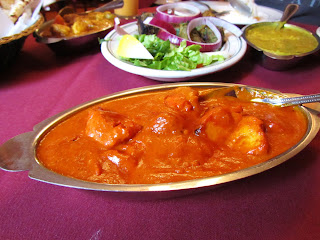 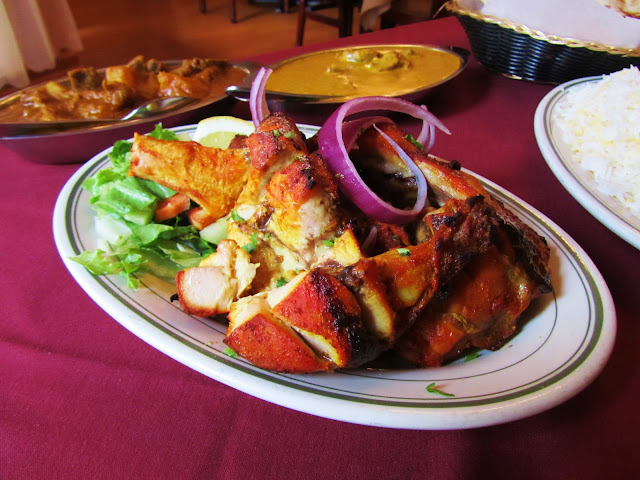 In a world where tomatoes are being skimped on in fast food burgers, it's comforting to find that fresh tomatoes aren't being left out of dishes that absolutely require it... like chicken madras.  No tomato in my burger? Extra lettuce please.  But no tomato in my madras? I can't bear to imagine.  After all, it wouldn't be chicken madras without fresh tomatoes.  What I like about the madras has to do heavily with the confused veggie-fruit.  Its flesh provides some relief from the spicy madras sauce.  The juices are untainted by the spices... cooling, refreshing... like water from the backyard hose on a hot summer's day.  The tomato is juxtaposed nicely against the sauce, teeter-tottering the spiciness on your tongue.

My co-workers and I usually ask for two orders of the tikka masala (a spicy version for the tough tongue and a mild version for the weaker one) just to make sure there is enough to go around.  And as if we didn't already know that's it's the absolute favorite of the house, the dish is highlighted in red on the menu just so patrons take note.  It's not even the chicken that holds our attention; it's the creamy tomato sauce.  Over rice, slathered on naan, or even doused onto a samosa, the tikka masala sauce cannot be passed up.

Numerous times a friend or co-worker has exclaimed that the chicken tandoori looks dry.  Well, friends, let me tell you... after one bite you'll know that the chicken, as white as the meat is, is as juicy as a pear.  The combination of garam masala, garlic, ginger, cumin and cayenne pepper along with yogurt give the chicken the special taste, and the mixture of red chili pepper and turmeric give it the color.  After being garnished with sliced onions and a wedge of lemon, the tandoori dish becomes unbelievably mouth-watering.  You'll be able to smell the exotic spices and the fresh citrus scent on your fingertips for hours after lunch is over. 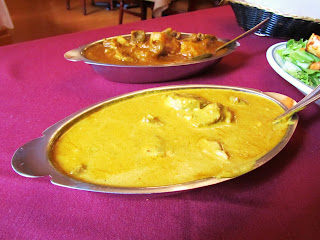 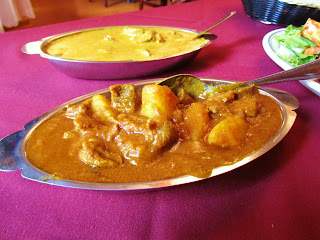 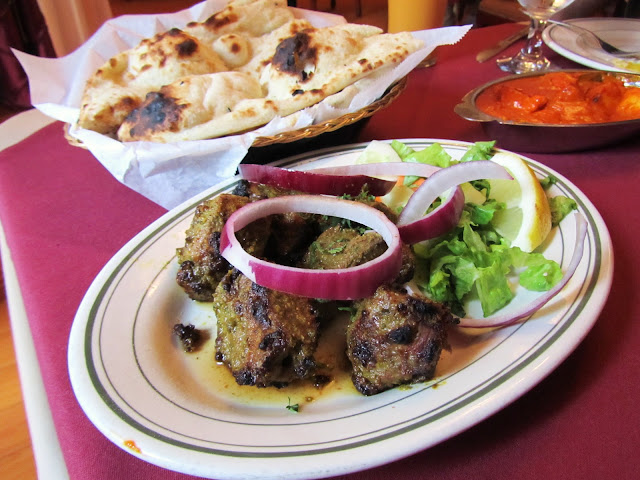 If the chicken tikka masala is the house favorite, the lamb korma is mine.  The korma is much creamier than either the madras or the tikka masala.  In fact, if you bring the plate close to your nose and take a whif, the korma has the distinct smell of butter.  What I really love is not the creamy, buttery fragrance but the bits of ground almond that sit throughout the gravy.  Every so often I'll bite into the bits of almonds, which conjures up images of biting into the hazlenut bits in a Ferrero Rocher.  Firm but soft to the bite, the almonds make all the difference.

Seeing aloo in the name of this dish means that the dish contains potatoes; potatoes with curry... what a tasty concept.  Toss in some lemon juice, and you've got a dish with a truly spicy kick.  The lamb vindaloo is the spiciest of the dishes thus far, so I would suggest tasting it after tasting the other sauces.  Like the lamb korma, the meat is slightly gamey but as tender as chicken.  The strong spices and the firey kick definitely help reduce the gaminess of the lamb though.  And to help reduce the fire? I'm sure glad I have some of that mango lassi left.

Like the chicken tandoori the lamb tikka is roasted with herbs and spices in a tandoori oven, and it's anything but dry.  Break open the lamb, and you'll see for yourself.  Glistening, gleaming meat juices flow down the nooks onto the plate.  The juice from the meat along with the freshly squeezed lemon juice create a sauce in itself.  Have it over the long-grain Basmati rice, and you may forget about the other dishes. 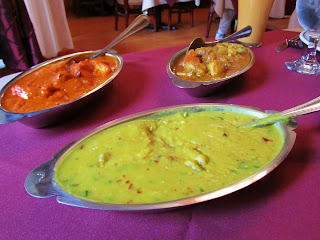 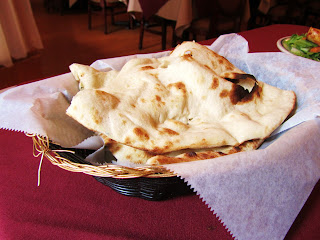 Dal tarka
I'm not particularly fond of vegetable only dishes, but I ordered the dal tarka once, and it completely blew my mind away.  The menu description is simple: lentils cooked with garlic.  But upon arrival at the time, I know it's not as simple as it sounds.  There are bits of red and splotches of green, probably from the chilis and the cilantro or parsley, floating atop the backdrop of yellow lentils.  Chopped slivers of garlic running throughout give this dish a warm and inviting taste.  It's neither as spicy as the others nor creamy either.  The dal tarka was the turning point for my anti-vegetarianism (the saag paneer and the eggplant bharta are great veggie dishes as well).  Dip the naan into the dal until the plate is running on empty.  And when that happens, bend the naan just a little bit more so that the taste of home can be scooped up by fluffy carbs and into your cavity of gluttony. 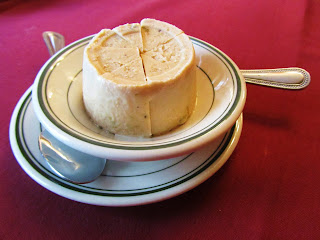 Pistachio ice cream
Many apologies for what I'm about to say.  The pistachio ice cream looks like cat food.  Why it's cut like Fancy Feast is beyond me.  But what I do know is that I prefer leprechaun green pistachio ice cream from Rite Aid much more than I prefer this.  It's worth the try, but if you can't stomach the color or grainy texture, try a different dessert item, or order another lassi for dessert.  I'll pass on this one... my food coma is about to hit anyway.

Each time the staff at Bollywood sees us, they probably wonder if their lunch menu has any relevance with us.  I'm sure they designed a lunch menu that tries to prevent the onset of food coma (light on quantity but heavy on flavor), but my Indian food gluttony absolutely defies their goal.  Sorry Bollywood, you're food is too good.

Each time I walk out of this restaurant in zombie-like fashion, I realize why the restaurant is located in a dungeon of a space but happens to be surrounded by calming waterfalls and ponds.  It's the perfect place for the post-lunch, food coma nap.  Ooh, I see a bench.